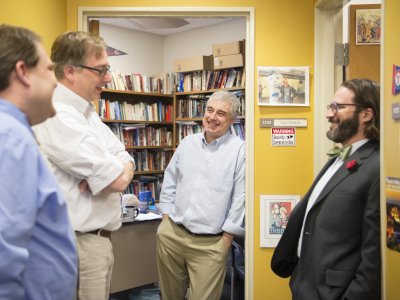 IN A RURAL CORNER OF NORTHWEST IOWA, DORDT STUDENTS DRIFT ACROSS CAMPUS WITH GLOWING SCREENS IN THEIR PALMS. OUTSIDE TOWN, EXPERIMENTAL DRONES HOVER ABOVE CORNFIELDS, AND CARS ON HIGHWAYS INCH ALONG ROUTES THAT BEGAN IN THE MIND OF A COMPUTER.

Seven hundred years ago, a time before satellites and cell phones and hyperconnectivity, a wandering Italian poet took pen to paper and composed one of the West’s most enduring epics. Speaking into a world of political feuds and medieval sensibilities, Dante Alighieri created a literary universe populated by demons and angels, popes and politicians.

This semester, many students will open the Divine Comedy—or download it—and enter into the God-haunted world of the Middle Ages. Despite the distance separating Dante’s world from that of the 21st century student’s, Dordt professors Josh Matthews and Walker Cosgrove are convinced the two have more in common than meets the eye.

Over the summer, Matthews and Cosgrove spent a week immersed in the 700-year-old epic poem. They studied the text alongside scholars from across the country as part of a seminar hosted by Samford University in Birmingham, Alabama. It was the first in the university’s new series of annual summer seminars titled Teaching the Christian Intellectual Tradition.

Before the seminar, Matthews, a professor of English, doubted whether he could incorporate the text into his introductory level core course, Responding to Literature.

“I thought the poem required too much historical context and background, and that the students wouldn’t relate to it. After the seminar, I am quite confident that not only can I teach the Comedy well in CORE 180, but that I can connect it to students’ lives, desires, and beliefs—even though it is a 700-year-old medieval Italian poem!”

History Professor Walker Cosgrove had similar reservations. “How do we teach this text?” Cosgrove wondered. “It’s a thousand pages. It’s poetry. Students don’t love poetry. We have Facebook now; we have cell phones. How do we get students interested in that?”

He, too, felt equipped to begin using the Divine Comedy in his core history course. He also reworked the syllabus of his fall medieval history course to include the text, which he will have students read in its entirety. “Dante had an unparalleled way of synthesizing all knowledge before him,” explains Cosgrove. Students will devote a month to study of the poem, which joins medieval perspectives on philosophy, history, art, political science, biology, astronomy, and more.

Dante Alighieri was a poet and political figure writing in the late-13th and early-14th centuries. Composed during Dante’s exile from Florence, Italy, the Divine Comedy describes an imagined journey through hell (Inferno), purgatory (Purgatorio), and heaven (Paradiso). Steeped in themes of sin and redemption, the poem serves as an allegory of the soul’s journey toward God.

Despite its medieval perspective, Matthews and Cosgrove think the Comedy has much to say to Dordt students today. In fact, they suggest a careful reading of the poem reveals parallels between the Reformed and Roman Catholic traditions. “Roman Catholics had a total life view, a total worldview, that gave them unity and purpose,” Cosgrove explains. “They were rooted in a common history and tradition. Ultimately, we share a lot of common ground.”

This “total life view” suffuses the text, shaping Dante’s poetic encounters with real and mythic figures from across history and the known world. According to Matthews and Cosgrove, the poet uses these encounters to move the reader toward larger theological questions. For Dante, however, these questions are never merely spiritual, but encompass every arena of human study and activity.

Both professors will use the text to prompt students to consider the concept of a worldview, and to critically reflect on how their own worldviews shape their perceptions. In this way, they hope to create a productive space for students to engage with contemporary questions through the lens of Dante’s work.

“How do we wrestle with these questions on a daily basis?” asks Cosgrove. “Someone in the Middle Ages was doing it, and we ought to be doing it, too.”

Matthews and Cosgrove have begun laying the groundwork for a team-taught course on Dante and the Renaissance, in which they hope to explore “how a total worldview and philosophy, in this case Catholicism and Renaissance humanism, affect a city over time—its art, politics, architecture, economics.” They also hope to take students to Florence, Italy, as a part of the course.