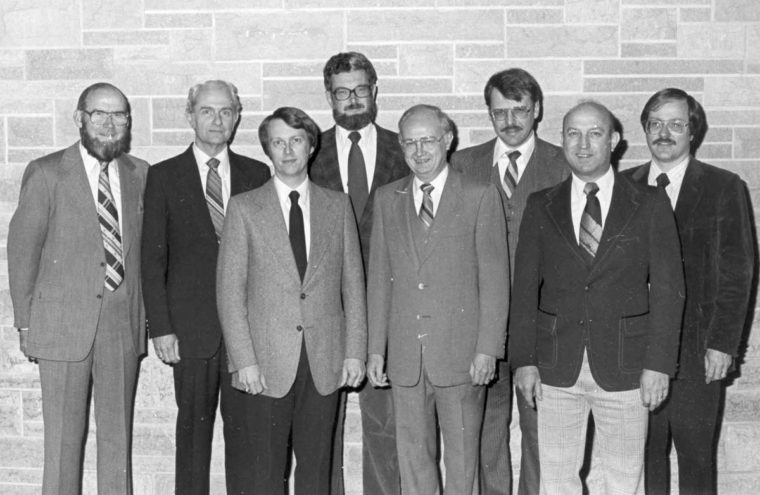 Dordt faculty have come from more diverse backgrounds over the past 20 years, and new majors have been added, yet a Dordt education remains remarkably the same, says longtime faculty members Dr. Wayne Kobes (’69) and Dr. Charles Veenstra (’68).

Kobes and Veenstra speak from decades of experience. Both are alumni professors who have watched the faculty change and programs develop. They have also watched younger alumni with specialized training and experience return to their alma mater to teach because of what they gained as students. These alumni faculty stories help tell the larger story of how a Dordt education has shaped students over the past 60 years.

Kobes came to Dordt as a classical languages major in 1965.

“Former President B.J. Haan had a significant influence on my parents,” Kobes says. Haan was something of a firebrand and promoted Dordt College in the local and broader Reformed Christian community. He preached and spoke tirelessly about the implications of believing that everything Christians do, not just their worship and individual expressions of faith, grows out of the conviction that God, the Creator, is sovereign over everything and that Christians are his hands in his world, Kobes says.

“I was strongly encouraged to go to Dordt College,” says Kobes, admitting that it took a few years for him to appreciate the difference his education would make in the way he thought and lived.

“It was almost like a second conversion,” he says. “My concept of faith was a combination of doctrinalism and pietism: get doctrine straight, live a life of prayer, obey God’s laws, and go to heaven and sing with the angels.” He recalls not being too excited about the prospect of singing in a heavenly choir.

At Dordt, he came to see that what he does every day matters because God created his world good and gave his people work to do in it—work that makes a difference for others and for Christ’s kingdom and culminates in living with God in the new heavens and new earth.

“It was liberating and challenging to think about every part of life lived in service to God,” he says.

After Calvin Theological Seminary, Kobes intended to enter congregational ministry. He found, as did others, that Haan could be persuasive in convincing Dordt alumni who embraced this “kingdom vision” to come back to teach. He’s been here since.

“It has been enriching and challenging to be a faculty member at Dordt, deepening my understanding of what it means to be a Christ-follower,” he says. He’s shared that vision with his students for 42 years.

“My dad believed Reverend Haan was on to something in his passionate commitment to a Kuyperian understanding that every square inch of creation and life matters to God,” says Veenstra. His father told him he should go to Dordt.

“It was a wise decision,” says Veenstra, who plans to retire at the end of this year. “Dordt opened up for me a broader sense of God’s kingdom. It still fires me up. It’s not just philosophy and history that matter, but communicating, plumbing, and nursing.”

Veenstra, who teaches communication, disliked speech as an undergraduate, but he came to see that learning communication skills was an important way to serve. He participated in Dordt’s debate team as an undergraduate and savors the memories of the lively discussions he shared with team members and with other students on campus—conversations about topics such as what a Christian political party might look like.

Veenstra returned to Dordt to teach in 1976.

“Faculty members push each other hard to explore what difference it makes in the way we teach our disciplines that we are Christians,” he says, believing it means more than opening class with prayer and treating people well.

Dr. Robert DeHaan (’85), who teaches environmental studies and community development, is a bit younger than Kobes and Veenstra but also had parental encouragement to attend Dordt.

“Dad told me he’d help with tuition at Dordt, but I was on my own if I went to a state school,” he says. He came and is happy he did so.

“I gained a bigger sense of God’s kingdom and of our ability to work with him in his world, and I came to see more opportunities to live my faith in my vocation,” he says.

De Haan farmed back in Minnesota for a year after graduating, then put his agricultural knowledge to use in Nigeria, working with Christian Reformed World Missions to find sustainable ways to produce crops on a large scale.

“High rainfall tropical soils will only produce well for about 10 years if they are not treated well,” he says.

The experience convinced him to go to graduate school to learn how to do good scientific research. His daughter’s health kept him and his family stateside from then on, but he remained committed to researching agricultural practices that sustain the rich soils that God created.

“We’ve tried to develop a framework and rationale for living well as God’s creatures,” he says, adding that he has learned much from non-Christians who have done “really good work” in this area. De Haan recently conducted collaborative research with a local farmer that is getting statewide attention. They have tested different cropping systems—ways of planting crops—to find ways to decrease contaminants in community water supplies.

“Technology gives us opportunities to expand the reach of our research and its impact,” De Haan says. He’s thankful for being part of a “thoughtful, capable, group of faculty and staff who try to understand culture and explore and promote change as needed.”

Younger alumni faculty are sprinkled throughout the disciplines, alumni who have used their undergraduate education to excel in graduate school and in their fields and are now eager to help prepare today’s students for their professions.

For Language Professor Rikki (Mueller, ’04) Heldt, who grew up in East Germany and became a Christian after coming to the United States as a high school exchange student, Dordt College offered a positive alternative to negative attitudes toward the church and Christianity that she grew up with. She came to embrace the value of community as she experienced it at Dordt and now the opportunity she has as a professor to help students expand their cultural experiences and appreciation for what people from other traditions bring to our lives. She challenges her students to interact with people from other backgrounds to better understand the richness and complexity of God’s world.

Criminal Justice Professor Donald Roth (’07), a graduate of Georgetown law school in Washington, D.C., says both his undergraduate and faculty experiences at Dordt have deepened the way he thinks about justice and the law. After working briefly as a tax lawyer, he found that he wanted something more, so he returned to Dordt to teach criminal justice and business law.

“As we talk together in community, we don’t try to escape the big, bad world, but engage ideas and issues deeply and in a holistic way,” he says. This helps students understand how criminal justice and business law function and connect to other institutions in society, he believes. Through teaching, writing, and leading Dordt’s debate team, he tries to inspire and train students to put a reformational perspective to work.

Dr. Channon Visscher (’00), who teaches chemistry and astronomy, says his Dordt science education helped him begin to think deeply about faith and science. A NASA-funded planetary science researcher, he does not pretend that that questions of faith and science have simple answers, but he also believes they are not in conflict.

“Doing science in humility, paying close attention to God’s revelation in creation, and embracing the awe and majesty of creation have helped me appreciate more and more that science is a creative, human endeavor. We are equipping students to be scientists able to grapple with the questions that present themselves as we learn about our world,” he says.

He adds, “We know much more about the universe today than we did even when I was a student, but the questions are the same: what am I, God’s child in his world, doing here?”

Education Professor Mary Beth (Smith, ’91) Pollema credits Dordt College with helping her realize that finding a calling in life is much more than finding a job. A Spanish and education major, she came to see that Spanish could help build bridges between cultures and show Christ’s love to others. A former high school Spanish teacher, she now shares how faith and worldview shape the way she and her students learn and teach.

Dr. Leah (Schreurs, ’96) Zuidema, associate provost for curriculum and instruction who also coedits a professional publication in her field of English education, says that what she learned as a student about the value of living out of a godly world- and life-view has become a deeper awareness that all of life is worship.

“Students push us today. They expect excellence,” she says, noting that more students come from families with different traditions and habits from generations of previous Dordt students. “This forces us to talk together about what we assume and what we believe.”

Part of Zuidema’s job is to help faculty together deepen their reformational insight, drawing on the contributions of others inside and outside of the Christian community.

“It’s not always easy to know what’s right and what’s good in this complicated, fallen world that God created good,” she says. But it’s the task he’s given us, she believes.

Engineering Professor Dr. Justin Vander Werff (’00) has been working out of this perspective both on campus and off. He and Dr. Joel Sikkema (’09) have developed five principles to help them and their students think about engineering:

(1) The world and everything in it was created for God’s glory.

(2) People are called both to cultivate and to keep creation.

(3) People are creatures, not saviors.

(4) People are called to alleviate suffering in the human and nonhuman world.

(5) People are called to work out of gratefulness for Christ’s sacrifice, and he uses their work to accomplish his purposes even though they don’t always know how.

Vander Werff says these principles grow out of his Christian worldview, but as he’s designed earthquake-resistant bridges for the state of California, he has learned much from the good engineering of non-Christians in his field. For him, being a Christ-follower means serving others, by designing bridges that keep people safer or by exploring sustainable solar energy options for society.

After an alumni engineering society meeting last spring, Vander Werff said, “We all left feeling that our work is having an impact on our world.” He repeatedly hears engineering alumni say how much they value their education.

“The challenge to think Christianly is simple, yet it has a profound impact,” he says. That, in a nutshell, is what he and most faculty alumni learned at Dordt College, and that is what they hope future generations of students learn, too.