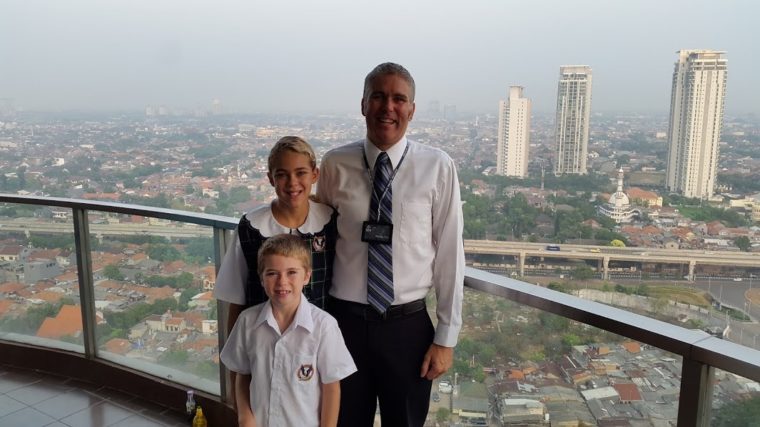 RYAN AND ERIN GROEN MAKE THEIR HOME IN INDONESIA

It all started in Dordt’s bowling alley, where Erin (Attema, ’98) and Ryan (’96) Groen struck up a conversation with old friends that eventually landed them in Indonesia. It was 2014, midsummer, and the two Dordt alumni were in town visiting Erin’s parents. While knocking over pins and chatting with Bethany (Baker, ’97) and Andy (’97) Schuttinga, the Groens learned that Bethany, a former Dordt administrator, had recently accepted a position at an international university in Jakarta. The Groens were intrigued. Shortly thereafter, they learned that a position had come open at a grade school in the same group of international Christian schools.

“We were excited about the schools, and the work Christian educators are doing in Jakarta, but we weren’t sure the timing was right,” Ryan says. Several months and many conversations later, they felt certain God was calling them to go. In July of 2015, they packed their lives into suitcases and moved with their two children, ages eight and 11, to the island of Java, near the border of the Pacific and Indian oceans. Since then, Ryan has served as head of the Sekolah Pelita Harapan (SPH) school in Kemang Village, one of five SPH campuses in Jakarta committed to educating students from a Reformed, Christian perspective.

This isn’t the first time the Groens have followed God’s call overseas and across continents. Since leaving Dordt, the couple has undertaken an international tour of world cities: four years in Sao Paolo, Brazil; seven in Chicago; and four more in Los Angeles. In all four places, they served in schools rich in diversity, where the Groens were in the ethnic minority. Ryan describes their neighborhood in Southern California as “like the United Nations, with people from all over the world.” In Chicago, they watched as their neighborhood was reshaped by what many call “white flight,” learning that, despite challenges, a school “can move forward and even thrive in the midst of demographic changes.”

The Groens have spent nearly two decades translating their lives and work into multicultural contexts. Both say their time as students at Dordt moved them toward this sort of life. The semester Ryan spent living in downtown Chicago as part of the Chicago Semester showed him “what ministry looked like in an urban context.” Meanwhile, Erin discovered a knack for learning languages through her Spanish courses at Dordt, and that skill has served her well throughout the family’s travels. Both Erin and Ryan say their experiences serving through PLIA (Putting Love Into Action) were especially formative, cultivating their commitment to service and nurturing a vocational vision that was global in scope.

These experiences set the stage for their travels around the globe and for their newest adventure in Indonesia. In Jakarta, the Groens live on the 28th floor of a condominium located in the heart of the city. It’s strange, they say, living in a home nearer the sky than street. Ryan describes the long, air-conditioned elevator commute down to smoggy streets, the tropical humidity, the long elevator ride back up to the 22nd floor of the Kemang Village school building. They’re still getting their bearings in their new city. The food is unfamiliar, and they rarely get into a car (a disorienting shift for the former California residents).

Already, though, the Groens have come to love Jakarta. The family often gathers on the balcony to watch huge tropical storms roll in from the ocean. Their neighborhood, populated largely by expats, is an exciting convergence of cultures and languages and world cuisines.

The Groens see God at work in this cosmopolitan city, which like many cities in the developing world bears contours of both poverty and extravagant wealth. The school Ryan leads is an international K–10 school near their home, and it’s part of a multi-tiered system “reaching every part of Indonesia for Christ—from the richest families in Jakarta to some of the poorest,” Ryan says.

On the face of it, Jakarta is an unlikely place for Reformed, Christian education to have taken root and blossomed. Most of the city’s inhabitants are Muslim, though there are also many Hindus, Buddhists, and Christians, among other faith communities. The school Ryan leads serves Christian students and families, but it serves many non-Christian families, too. These families are drawn by the school’s rigorous academic program, delivered in English, Ryan says. The Groens see in this a profound opportunity.

“Sekolah Pelita Harapan” means “Light and Hope School,” explains Ryan, and the school he leads serves wealthier Indonesian and ex-pat families whose children are preparing to study at universities abroad. The tuition paid by these students in turn supports other schools in the system, which serve lower- and middle-income families in Jakarta and smaller cities and villages throughout Indonesia. As unlikely as it sounds, Ryan says, “An entire country in Southeast Asia is being impacted by Christian education, and by the transforming power of the Gospel.” As in Sao Paolo, Chicago, and L.A., the Groens are grateful to witness God at work in the diverse world he created—and to be a part of it.