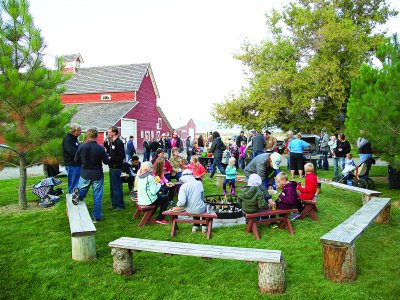 ON A CAMPUS KNOWN FOR ITS SENSE OF COMMUNITY, WHAT HAPPENS TO THOSE CONNECTIONS WHEN ALUMNI GRADUATE AND SPREAD OUT ALL OVER THE WORLD? THE COMMUNITY LIVES ON IN ALUMNI CHAPTERS.

One of the biggest benefits of attending Dordt College is the community created on campus. “You live with your closest friends, and others are just a few footsteps down the hall,” says Dordt alumna Kristen Brands (’10).

Like many Dordt alumni, Brands appreciated the camaraderie she had with others at Dordt. “But then you graduate, and the wonderful community present on Dordt’s campus doesn’t necessarily exist in the city or town you go to live in after college.”

Hoping to help bring that camaraderie with her, Brands took on the task of becoming the Sioux Falls chapter leader, helping to organize events and facilitate communication among Dordt alumni in the area. As chapter leader, she’s worked closely with the Alumni Council to create and define the activities of Dordt’s chapters. Across the country, chapter events have become a way for far-flung Dordt alumni to recreate some of that campus camaraderie in their home communities.

Chapters began as an intentional gathering of likeminded Dordt alumni and friends in 2014, with the first three chapters established in Big Sky, Montana; Lynden, Washington; and Denver, Colo. Since that time, three additional chapters have been established in Washington, D.C.; Sioux Falls, South Dakota; and Grand Rapids, Michigan. This summer, new chapters are planned for Chicago, Minneapolis, and Visalia, California.

In the last two years, chapters have hosted a variety of events, including a Denver service project; a corn maze in Bozeman, Montana; a wine and cheese reception during ArtPrize, an art competition in Grand Rapids; and many family friendly picnics.

“Dordt College is not just about the four years you’re on campus,” says Alumni Director Brandon Huisman. “Our mission statement makes clear that we want to ‘equip students, alumni, and the broader community’ for kingdom service—chapters are a way of living out that part of the mission.”

The idea is not just to bring Dordt to other communities, but to bring people together where they live and allow them to drive the events. “People living in these communities have a much better handle on what is happening there than we do. We trust them, so we rely on our chapter leaders and committees to help come up with ideas for gatherings based on what those living in the area enjoy doing, whether that is service, a social hour, or a fun activity that they can bring their children to,” Huisman says.

Brands says chapters are working to provide one event in their respective locations each year. “We realize that our alumni are busy and have many commitments,” she says, “but our hope is that—because the events are valuable—people will make the time to come to the chapter event in their area and reconnect with each other and to Dordt College.”