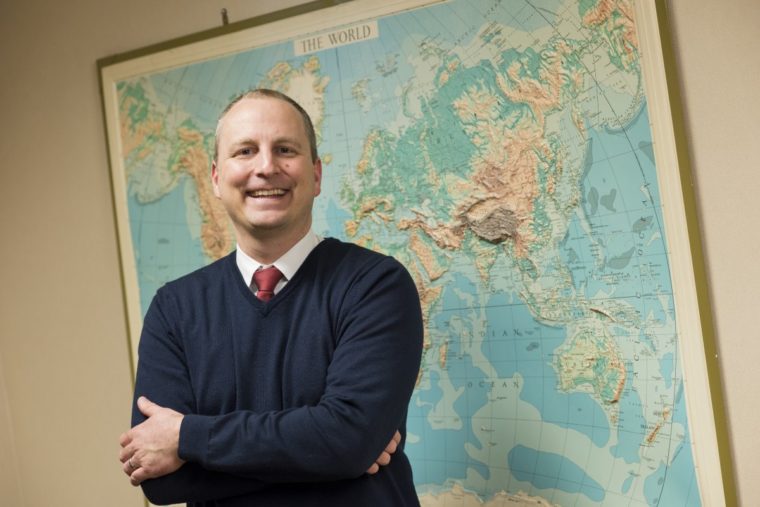 Off-campus and study abroad programs can be transformational experiences. Students live among people they come to know and respect who live differently than they do, think about issues differently, hold different things important, and believe differently.

Over the years, Dordt College students have studied around the world in countries such as Spain, Egypt, Nicaragua, China, England, the Netherlands, Uganda, Zambia, New Zealand, Australia, and more. They’ve also studied around the country: film in Los Angeles, politics in Washington, D.C., business in Chicago, music in New England.

The experience can be challenging—academically, personally, and spiritually. Students come back changed and often strengthened in their understanding and faith.

Dordt encourages its students to spend a semester in an off-campus learning program. Unlike many institutions, the college does not put a cap on how many students may participate. Dordt also allows students to study abroad without decreasing their financial aid. Allowing students to apply their financial aid package to their tuition whether they study on campus or off means that any student can benefit from thinking more deeply about immigration issues after spending time in Latin America, about refugee issues after studying in the Middle East, about security issues after studying in Europe.

As the world becomes more interconnected, Dordt’s global education staff is committed to giving students the tools to engage important global issues in a wise and thoughtful way while keeping them safe. Students do not travel to high-risk areas. Staff members keep tabs on the Department of State’s travel advisory list and only offer programs that are located in secure areas. Traveling always holds a certain amount of risk—whether you travel to South Dakota or South Africa, but students are given the information they need to be safe and smart travelers, and the college provides resources to respond to emergencies that may occur while students are abroad.

Dordt students can choose from more than two dozen off-campus study options. Three of these semester-long programs are Dordt-run: SPICE (Study Program in Contemporary Europe—based in the Netherlands), SPIN (Study Program in Nicaragua), and the Study Program in Zambia. Dordt also offers three-week summer programs. Other semester options, some more cultural immersion, some more professionally based, include programs run by partner institutions and by the Council for Christian Colleges and Universities.

God loves people “from every tribe and nation,” and we are called to “love our neighbors as ourselves,” says Dordt’s global education staff. Helping students grow in their cross-cultural understanding helps them be better neighbors and citizens and has become increasingly important professionally as more workplaces look for applicants with intercultural experience and skills. People who are sensitive to and understand other cultural perspectives than their own are more discerning voters, wiser donors, better co-workers, and more effective witnesses to Christ’s love.

“It’s hard to love your neighbor if you don’t know them,” says Adam Adams, Dordt’s new director for global education.

Adams’ commitment to cross-cultural understanding and global education grows out of his own experience. He grew up in a family that frequently hosted missionaries, and he had an aunt and uncle who served in the Philippines. These experiences prompted him to want to learn more about other cultures. In high school and college he traveled, spending Christmas in China one year, sleeping on a rice mat and seeing hundreds of Chinese Christians wait in line for four hours to get a seat so they could worship together. He learned firsthand that devout brothers and sisters live and worship in countries around the world.

Adams has been to 42 countries and one year spent six months backpacking across Asia.

“I wanted to see what community development looked like and learn more about the persecuted church,” he says. He did, and he learned much.

Adams taught English in a Muslim country for three years and as he came to know and interact with his Muslim neighbors realized there was much he didn’t know about his own faith. He returned to the United States to attend seminary in San Francisco, and while there worked with the largest group of Afghan refugees in the United States, learning more about the gifts of others as he worked across cultures. From the Bay Area he moved to St. Louis and continued working with refugees. At the same time he augmented his ESL training, learned about visa and immigration issues, and international education. He used these skills at a sister CCCU school, then the position came open at Dordt.

“I love Dordt’s educational philosophy,” he says. “To be involved in education for kingdom expansion in majors such as engineering, nursing, and business programs is exciting—and something international students are also looking for.”

Adams divides his time between administering programs where Dordt students can study in other settings and recruiting international students to study here. These students bring their perspectives and experiences to the campus community and offer opportunities for cross-cultural interaction not only for themselves, but for students who do not themselves choose to study off campus.

Adams hopes to facilitate even more ways for people in the Dordt community to get to know their neighbors, both far and near, to help them develop a curiosity and understanding that extends beyond what they hear in the news or think they know.

Even in rural areas today, people live in more diverse communities than they once did. Walking through Walmart in Sioux City or even Sioux Center, Dordt students see and interact with people from a greater variety of traditions and backgrounds. Getting to know each other has the potential to help communities find good ways to live together—to treat each other justly and learn from one another.

“Your perspective almost always changes when you get to know people personally, even if you disagree with them on important issues,” says Adams. He believes that cross-cultural competency is a skill that can be encouraged and learned, and he hopes to continue to develop ways for Dordt students to do so. And he hopes their lives will be as enriched by the experiences as his has been.