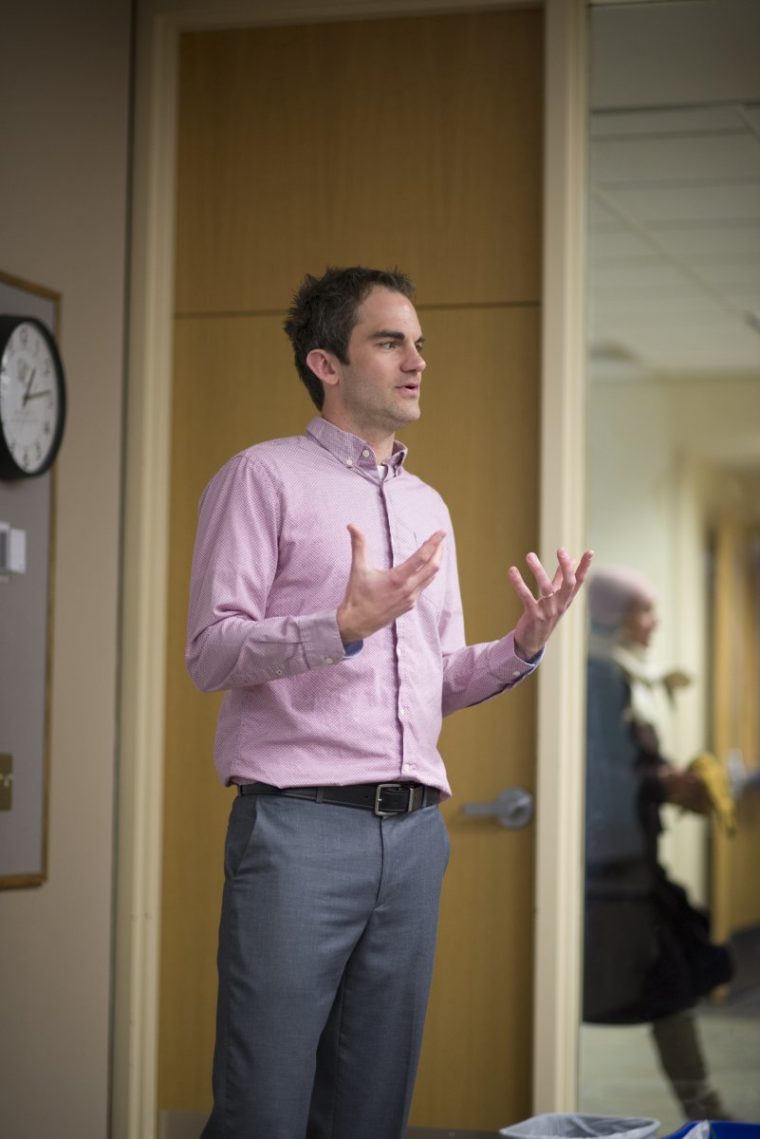 DR. BENJAMIN LAPPENGA HAS ALWAYS BEEN DRAWN TO THE STORY OF PAUL. HIS NEW BOOK DESCRIBES THE FIRST-CENTURY APOSTLE AND PROLIFIC LETTER-WRITER AS “A FIERY CHARACTER.”

“Paul was a zealot before he met Christ on the road to Damascus,” Lappenga says. “He was a radical, holding the cloaks of those stoning Stephen.”

Lappenga wondered if Paul had left his zealotry behind him after he encountered Christ. In his recently published book, Paul’s Language of Ζῆλος: Monosemy and the Rhetoric of Identity and Practice (Brill, 2015), Lappenga turns a scholar’s eye toward this question, returning to the text’s original language in order to re-examine Paul’s rhetoric in the light of contemporary theories about how language works.

In approaching Paul’s letters in this way, Lappenga discovered something unexpected. Paul didn’t “throw out his Jewish zeal,” as most Christians have come to understand his story; he radically redefined it. In fact, Paul continues to use that same Greek word, ζῆλος, throughout the New Testament, carefully working out its implications for his readers in letters to the early Church.

According to Lappenga, ζῆλος—often translated as “zeal,” “jealousy,” or “emulation”—is used strategically by Paul. However, its nuances are often obscured in modern translations of the Bible, which interpret ζῆλος, or zēlos, differently according to the context of the passage in which it appears.

“There’s a reason that Paul is using the same Greek word in these instances; to native readers of that language, that word triggers something for them—they would have noticed the repetition,” Lappenga says. He believes that Paul is trying to make an argument that would have been obvious to a first-century Greek reader but that we might miss.

Among Jewish zealots of the first century, “zeal” had a military connotation and suggested taking up arms, Lappenga explains. In the Greco-Roman world, the term was often used to encourage the emulation of people with power, money, and influence. The new understanding put forward by Paul, however, emphasized power in weakness and encouraged the “eager pursuit of community-building gifts.”

Lappenga describes Paul’s subversive reworking of the familiar—if fluid—first-century concept as “rightly directed zeal.” Harnessing insights from rhetorical theory and employing a linguistic methodology, Lappenga explores how Paul advances this redefinition of “zeal” in ways that form his readers, moving them toward a new, corporate identity in Christ.

Scholars have noted that Paul talks about emulating Christ, but they haven’t connected the concepts of “emulation” and “zeal,” despite their common linguistic root, and they haven’t explored how that connection might deepen our understanding of what it means to follow Christ, according to the author.

Lappenga doesn’t use the Greek word in the title to signal scholarly seriousness, nor to alienate an audience of non-specialists. It’s part of the book’s argument. “The book asks us to consider all the instances of this word’s usage together,” he says. “When you don’t translate them consistently, you miss the rhetorical strategy that I’m seeing.”

Read in this way, “Paul is asking his readers to consider this question: ‘What do you have zeal for?’” Lappenga says. “That’s another way of asking, ‘What is good?’ According to Paul, the ways the culture defines ‘good’ is not in fact good.”

“Paul doesn’t throw out zeal altogether,” Lappenga says. “He actually retains that claim for himself. He’s still a zealot, and just like he was zealous for the law as a Jewish person, he wants Christians to be zealots, too. But he wants to severely upend, or turn on its head, what that word means.” That upending amounts to a “reversal of cultural expectations about the people and qualities that are worthy of emulation,” Lappenga says, and Paul uses the idea of zealotry to exhort Christians to a radical form of Christ-likeness.

An early reviewer of Lappenga’s book praised it as a “balanced and fair critique of previous work on zeal-language in Paul” and put it in the “top quarter of books in the field.” Not simply a “word study,” Lappenga moves beyond linguistics to consider broader questions of Christian identity and practice.

Despite these implications for Christian living, Lappenga acknowledges the insights in his book won’t likely crop up in any three-point sermons. However, biblical scholarship has the power, over time, to refine and enrich our understanding of God’s Word. That’s why he became a biblical scholar in the first place.

Working out what the Bible demands of us today, as 21st century Christ-followers, is often as complex a task as it is challenging, according to Lappenga.

“God didn’t give us a list of propositions about the faith, he gave us something much richer and more complex—he gave us a story,” Lappenga says. In this, he sees evidence of God’s sovereignty. “A story does things that a list wouldn’t do,” Lappenga says. “Because of the Bible’s complexities, we are constantly called back to the text, being shaped and formed by it. It continually challenges us to reconsider what we thought we knew. The work will never be done.”