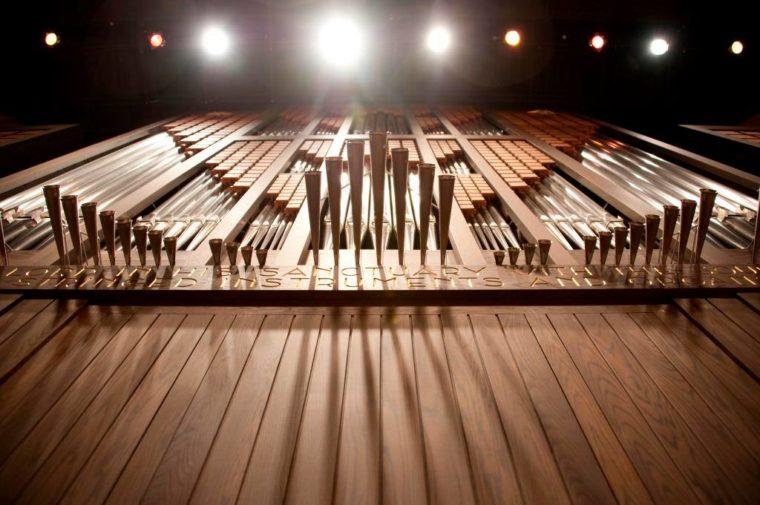 In her written history of the Casavant organ at Dordt College, Dr. Joan Ringerwole depicts the instrument as having voice and breath. Fittingly, Ringerwole refers to her work of organ history, “Praise Him with Organs,” as a “biography,” and in it the organ takes on the quality of a living being—complex and responsive, with all of the parts working together in harmony.

Ringerwole, who taught in the Dordt music department for 38 years, says this emphasis on breath is intentional, and she points to the organ’s flexible winding system, which “allows a more vocal onset of the speech in the attack of the pipe.” According to Ringerwole, the flexible winding “allows the instrument to ‘breathe,’” and much like wind moving over the vocal chords of a singer, this “can have a momentary effect on the pitch of the instrument.”

The choice to install a flexibly winded instrument was just one among a series of decisions made collaboratively, over the course of several years, as the interior architecture of Dordt’s organ took shape. Under discussion were drawknobs and stoplists, ranks and manuals—a host of technical terms nearly meaningless to the layperson, but which together determine the quality of an organ’s “speech”—its pitch and timbre, and the range of sounds it can produce.

Bringing the organ to Dordt was a feat of mathematical modeling and musical expertise. The group tasked with seeing the project through included an architect, an acoustician, a musician (Ringerwole), and an expert in organ tonal registration. The process picked up steam in 1976, when Casavant Frères, organ builders based in St. Hyacinthe, Quebec, were selected for their modern design, which fit the spare lines of the new auditorium.

The collaboration continued across state lines and international borders, in an era without the convenience of cell phones or the Internet. Instead, the organ’s design evolved through a network of handwritten letters and telephone conversations, arranged visits and dinners.

“The process took about two years,” recalls Ringerwole, who spent many hours on the phone talking with experts. All decisions were guided by the demands Dordt’s organ would need to fulfill: lead congregational singing in worship, be suited for teaching and performance, accompany choral and instrumental ensembles, and perform a wide range of musical literature.

Under the guidance of Ringerwole, it was decided early on that the organ would be mechanical rather than electronic. Her experience as a doctoral student at the University of Iowa convinced Ringerwole of the superiority of mechanical action, or tracker, organs. According to Ringerwole, tracker organs give the organist a greater sense of control over the instrument through a direct, physical connection between the organ’s keys and the valves that let air into the pipes.

It is this quality of responsiveness that organ student Rianne Van Wingerden (’16) appreciates most about the instrument.

“I love the power that it feels like I have. I love the range of sounds I can make; I love the combination of sounds I can produce,” she says. An elementary education major with a background in piano, Van Wingerden applied for and was granted an Organ-from-Scratch Scholarship in her sophomore year.

Making the adjustment from piano technique to organ technique was difficult, but her biggest challenge was learning to accompany congregational singing, one of the organ’s most important roles, according to Van Wingerden. Unlike the piano, an organ can sustain a note indefinitely, helping to keep the congregation on pitch.

Another Dordt organ student, Joni Van Den Top, agrees. When compared to many other instruments, the organ “is better suited to be a leader,” she says.

“I love that whenever I play the organ at Dordt, I feel like I’m on top of the world. I feel like I could blow the town of Sioux Center away, especially with big, loud pieces,” she says. She also appreciates the versatility of the instrument, in both worship and performance. “What I love about the organ is that you can play one instrument and make so many different sounds. Two people can play the same song, and it can sound completely different because of the different stops and the registration used.”

This uniqueness and versatility will secure the organ’s role in the future of corporate worship, the two students say, although with the rise of praise bands and contemporary styles of worship, neither will be surprised if the organ’s role is smaller than in the past.

“I come from a traditional background,” says Van Wingerden, “so the organ is used frequently in my church. However, in more contemporary churches that have organs, I think creatively incorporating the organ will continue to happen. It’s such a unique instrument.”

Ringerwole, too, stresses the organ’s enduring importance, remarking that every Sunday morning across the country, large urban churches continue to employ their organs to lead congregational singing.

Ringerwole’s history of the organ is stored in Dordt’s Digital Collections, accessible through the Dordt libraries webpage (digitalcollections.dordt.edu). In it, Ringerwole tells the full story of the organ being brought to campus. The document also includes a detailed, and highly technical, explanation of all of the organ’s various stops and divisions, as well as extensive appendices containing historical documents related to the instrument.

This historical feature is highlighted as part of Dordt College’s 60th anniversary year. To see an interactive timeline, go to www.dordt.edu/timeline.