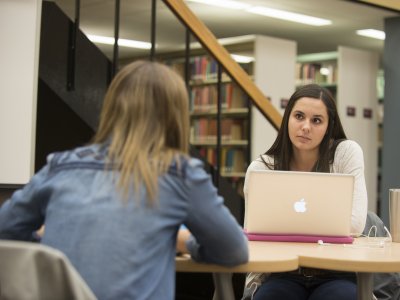 DORDT RESPONDS TO CONVERSATIONS REGARDING IMMIGRATION

Across campus, first-year students in Dordt’s Core 100 course—Kingdom, Identity, and Calling—processed Soerens’ talk in written reflections and group discussions. Students in Dianne De Wit’s section of the course admitted that, before hearing Soerens speak, they didn’t know enough to take a firm position on U.S. immigration policy. Afterward, she says most students felt better-informed and had more nuanced positions on the issue. Though not everyone agreed on the finer points of immigration reform, she says, “They learned so much; their whole perspective broadened.”

Soerens’ talk didn’t trigger a campuswide movement toward perfect consensus, however, says Donald Roth, Dordt criminal justice and business administration professor. In fact, it prompted lively discussion about how to deal with the issue of undocumented immigrants in our churches and communities.

“Students were buying the idea that it’s not our job as individual Christians to enforce governmental laws and regulations,” Roth says, “but some were still asking, ‘At what point are you being complicit, and not submitting well to the governing authorities?’” In wrestling through these questions, many students’ perspectives were further complicated by hearing the stories of their Canadian classmates, many of whom have first-hand experience navigating our country’s complex immigration system.

Roth says, on the whole, what resonated most with his students was Soerens’ call to reach out to immigrants in their communities—to get to know them through church or community activities, invite them into their homes, share meals, and listen to their stories.

Tara Boer, Dordt social work professor, has purposefully structured her courses to facilitate this sort of engagement. Boer wants students to “learn to be comfortable being uncomfortable,” and she creates assignments “that lead students to hear stories and build relationships” with people from different cultural or religious groups.

“So often we remain comfortable in our preferred social circles and we fail to seek out relationships with people that live, work, and believe in different spaces than we do,” Boer says. “Jesus spent most of his ministry interacting with the ‘least of these.’” We, too, need to love people in the context of meaningful relationships.

Heather Kaemingk, a student in Boer’s Diversity and Inequality class last fall, grew up in Sioux Center, but didn’t have meaningful interactions with immigrants living in the community until she came to Dordt. She now meets regularly with a “reading buddy” at the local library—he’s six years old, and he often translates for his parents, who are immigrants.

Over the past decade, Sioux Center’s demographics have shifted dramatically. Partly in response to changing demands within local industry and agriculture, a third of the population is now Latino/a. Like Soerens, Kaemingk sees in the global movement of people a profound opportunity—to share Christ’s love with and to enrich her own understanding of the diversity within the body of Christ.

“There’s diversity here in Sioux Center,” she says. “Just go across the street, and there are people with complex stories you’ll never hear unless you’re open to them.”

While Kaemingk believes it’s important for Christians to advocate for the immigrants in their communities, she sometimes feels overwhelmed by the complexity of policy questions and discouraged by the way the issue is politicized, even within churches. Dordt’s Dean of Chapel, Aaron Baart, has helped her think through her obligations as a Christian and a U.S. citizen, and she strives to engage controversial issues like immigration reform in a way that is “kingdom-charged, not politically-charged.” During the panel discussion following Soerens’ evening talk, Baart challenged Christians to move beyond concerns of economic self-interest and personal safety to achieve a perspective on immigration that is turned upside down by the good news of the gospel.

Thinking about Jesus’ example gives Kaemingk hope. “I can open my ears to my neighbor,” she says. “I can listen to their story and walk alongside them.”

Kaemingk recalls a recent afternoon at the public library. Sitting with her young reading buddy, head inclined toward a shared book, she looked up to see people from different cultural backgrounds reading, talking quietly, sitting at computers. Among the stacks were recent immigrants to Sioux Center as well as longtime residents. In this everyday gathering of people, Kaemingk says she caught a glimpse of the kingdom of God: “It was beautiful too see two cultures intersecting together. It didn’t matter if someone had documentation or not—my friend and I were there to spend time together. We were there to read a book.”