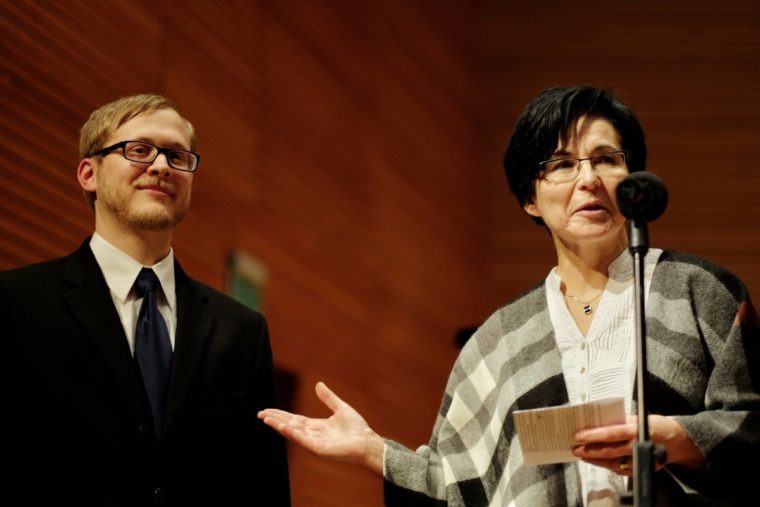 In high school, he played piano in his church and often wrote his own hymn arrangements for the offertory. Taking music theory courses with Dr. Karen DeMol and a composition course with Dr. Luke Dahn at Dordt piqued his interest further. He performed original works in both his junior and senior recitals. Following graduation he decided to do graduate work in composition at the University of Wisconsin-Madison rather than look for a teaching job. Today this is clear: he wants to earn his living by composing.

Posthuma’s decision was affirmed this spring when he earned international recognition and reached a milestone in his career as a composer. His orchestral piece “Fili de Perle” (Strings of Pearls) received third prize in the Karel Szymanowski International Composition Competition. In March, Posthuma attended the world premiere of his work in Katowice, Poland.

“It was very exciting to hear the piece performed by an orchestra the first time,” he says. By the third time he’d heard “Fili de Perle,” he was convinced it “really sounded good,” and other than a few minor tweaks, he was ready to have it take on a life of its own. He also submitted the composition to several festivals and hopes “Fili de Perle” will have an American premiere in the near future.

In September of 2015, Posthuma, who moved to St. Paul for its musical opportunities and temporarily supported himself by working in a grocery store, was looking for a new composing project when he learned about the Szymanowski Competition. He challenged himself to write a piece for large orchestra by the November 30 deadline.

“It was an ambitious project, and I figured it would be a good experience, whether I won or not,” he says. Winning competitions is one way for others to get to know, perform, and commission his music.

Next to hearing he’d won a prize, the four days in Poland were a highlight of his year.

“It was really exciting to share my work in another culture, being able to communicate beyond language barriers,” he says.

Posthuma describes his musical style as one that combines lyricism, evocative imagery, and intense emotional contrasts, yet maintains clarity in form and function. “‘Fili de Perle’ is a coloristic dance for orchestra that is very strictly constructed and logical but feels effortless and free,” Posthuma says.

Posthuma says he likes to read poems as starting points for his compositions because of the emotion they evoke. A friend had given him Schelhaas’ God of Material Things as a birthday present. As he began reading, he says, “The poems resonated on so many levels.” He understood what it’s like to live in a rural community, and he, too, finds God in the rich, earthy, everyday parts of life—something he learned early and began to understand more deeply at Dordt.

“The poems struck me differently in the context of a large university than they may have earlier; they gave me a way to connect to my personal voice,” he says. The poems also spoke to his professors, who shared his appreciation for their remarkable breadth of human emotion.

“Who is this poet? These poems are beautiful,” he was asked.

Schelhaas was honored to be asked for permission to use his poems.

“I write poems. Some of my poems might be called love poems to God—though I didn’t really think of them that way until I started thinking about this essay,” Schelhaas wrote in a piece at inallthings.org, an online publication of Dordt’s Andreas Center in which writers explore the implications of Christ’s life, death, and resurrection for the world.

Many of Schelhaas’ poems are responses to the natural world, using free form and an informal tone.

“I essentially write about real things I see and feel”—everyday things that reflect life in God’s world.

Captured by Schelhaas’ words and images, Posthuma began as he does with most vocal compositions—allowing words, images, and moods to sink in, grow, and connect themselves to musical sounds and images. He builds on this to create melodies and rhythms that can grow into a unified composition.

“I love writing with text,” he says. “It comes most naturally.”

“Sometimes it’s a bit of a mystery,” he says about where this process takes him. Gradually, usually sitting at the piano, he organizes the poetic imagery into musical ideas. Today’s MIDI technology (Musical Instrument Digital Interface, a way to record and play back music using a computer) makes obsolete the process of writing notes on a score, and it allows him to hear many layers at one time. Still, hearing the sounds in one’s head on different instruments takes practice and listening.

Posthuma credits his musical education and the expansive worldview he developed as a student at Dordt with giving him the tools to do what he is doing today.

“All of life is devotion and worship, from writing quality music to serving a customer in a grocery store,” he says. “Music allows us to grow, praise, find shalom.”

Today Posthuma also works at the ticket office of the Saint Paul Chamber Orchestra—getting a little closer to the work community he wants to inhabit. He tries to spend three to four hours a day composing, although he admits that sometimes he can only find three or four hours per week. He sings in Kantorei and the auditioned VocalEssence Chorus, a group of talented volunteer singers connected to the VocalEssence Ensemble, one of the Twin Cities’ many exceptional choral groups.

Someday Posthuma hopes to teach composition. To get there, he’ll keep entering competitions and festivals, looking for commissions, and sending his music out so that it becomes known. He had two more premieres in April in Mississippi and the Twin Cities, and has another upcoming in Italy in May.

“This is my mission field,” he says. He’s eager to share with the world the work he’s been called to do.

Schelhaas (’63) has published two books of poems, God of Material Things and Illuminated Manuscript, both available through the Dordt College bookstore and from Amazon.

“Essentially I write about real things I see and feel,” says Schelhaas. When he is struck by a scene or an experience’s potential, he quickly jots down some details. Then comes the fun part: playing with the words and images on his computer, allowing words and images to take him to new words and images and eventually to a unified idea.

“Sometimes it becomes a completely different poem,” he says.

Last October, Posthuma visited Dordt’s campus, and Schelhaas was able to hear his poems set to music. The sound filled the room. “It was powerful,” he says.