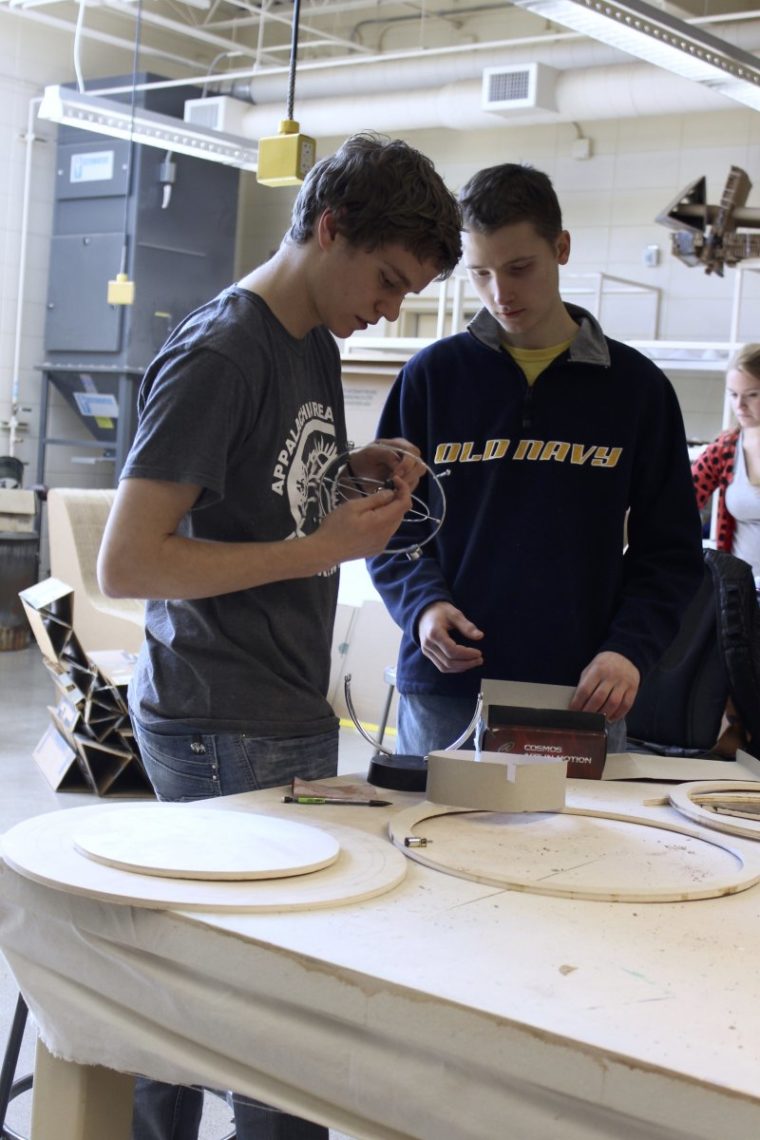 At Dordt College, it’s not unusual for departments to collaborate on cross-disciplinary projects. Few have been as original as the partnership between the engineering and art departments, who recently teamed up to engineer art. This spring semester, an electrical engineering class joined a sculpture class to create interactive kinetic sculptures.

“This was a new venture in collaboration between two unlikely yet very compatible groups,” said Art Professor Sara Alsum-Wassenaar, who taught the sculpture class.

Last summer, Alsum-Wassenaar became interested in using Arduino software, an open-source electronic prototyping program used to create an interactive sculpture. Alsum-Wassenaar spoke about her idea with Engineering Professor Doug De Boer, who uses Arduino in his electrical engineering class. De Boer was enthusiastic about the partnership, and the project “took off from there.”

“We wanted to create collaborative sculptures that drew on the strengths of the students involved,” says Alsum-Wassenaar. “The art students brought creativity and building skills, and the engineers brought practical questions and an understanding of the electrical components.”

“Our classes even meet at the same time so it was just meant to be,” she adds.

“In the middle of February, we began learning how the Arduino software worked to help us envision what sort of sculptures were possible with this technology,” said junior art student Hope Kramer. “Then we met with engineers and explained our ideas, and they broke into teams and joined our groups based on what they were interested in programming.”

The engineering and art students met every few weeks to discuss their plans and the progress they had made on their respective tasks.

“We talked through and drew out lots of ideas and modified them based on what else came to mind,” said Kramer. Students from both majors then worked together to assemble their sculptures.

“One thing I’ve learned in this project is how important communication is,” said senior engineering student Joshua Susman. “I’ve enjoyed problem-solving with my group. Coordinating with others takes work, but it is so very worth it.”

“I’ve enjoyed the blend of technology and art in this project,” said Kramer. “I majored in engineering my freshman year and have switched over to being an art major, so it’s really fun for me to see how these two very different areas of study can be brought together in a really cool way.”

“I hope more cross-department collaborations continue here at Dordt College, particularly between mathematically based departments and the humanities,” said Alsum-Wassenaar. “I think we have a lot to teach each other about value in God’s creation.”