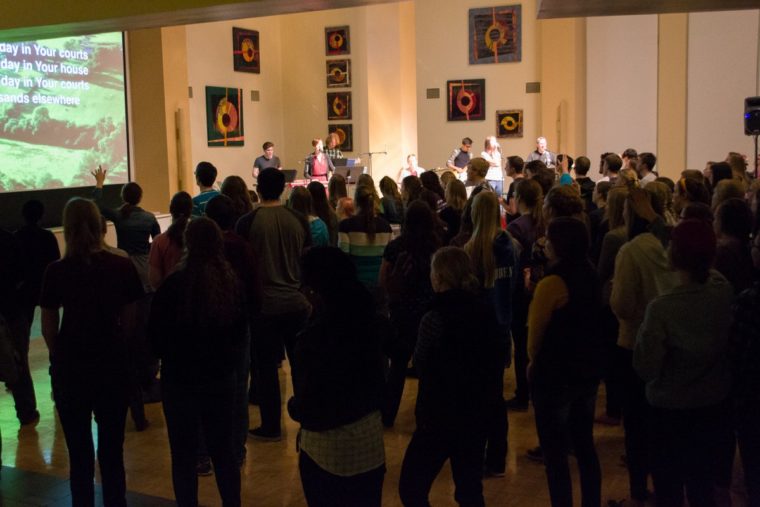 PUTTING A NUMBER TO IT

Say it’s January, and the snow is knee-high and still falling. Dordt students are trudging across campus, weighted down by books, snowflakes collecting in their eyelashes. Many will reach their destinations in the space of 10 or 20 freezing breaths.

Others are headed to the distant reaches of campus—past buildings and prairie, beyond the East Campus Apartments, beyond even Covenant, to the paved expanse north of Seventh Street. “Siberia” is Dordt’s northern- and eastern-most parking lot, and students, on the whole, are not happy about it.

According to recent survey results, their dissatisfaction by and large ends there.

The results of the Student Satisfaction Inventory (SSI) are in, and aside from “adequate parking space,” Dordt’s satisfaction scores are higher than comparable institutions nationwide in each of the survey’s 98 categories.

Jim Bos, Dordt’s registrar and director of institutional research, points out that surveyed students didn’t rank parking high on their list of priorities, but it’s still something the administration revisits occasionally. “If we were a commuter campus, this would be a more pressing concern,” he says, recalling with a laugh the much bleaker parking situations he faced as a graduate student.

The satisfaction categories in which Dordt College ranks higher—sometimes much higher—than other four-year private colleges and universities include:

• reputation of the institution within the community

The survey, developed by Ruffalo Noel Levitz and widely used among institutions of higher education, is designed to measure student satisfaction holistically. Survey questions touch upon every dimension of a student’s college experience: academics, co-curricular offerings, student services, and campus life. The survey also gets down to the brass tacks: food, lodging, and—let’s not forget—parking. As a member of the CCCU (Council of Christian Colleges and Universities), Dordt’s version of the SSI also includes questions related to spiritual formation and growth.

The SSI was used at Dordt last fall as part of an assessment project developed by the CCCU. Participation was voluntary, but 481 students—36 percent of the student body—participated. That’s a high response rate, according to Bos, and it gives him confidence that Dordt’s results are representative and meaningful.

“We’re always looking for ways to assess how well we’re doing,” he says. “Tools like this can be a helpful way to see what Dordt students care about and how well we’re delivering on those things.” Dordt’s results also give all of us a sense of how Dordt stacks up against similar institutions across the country.

The survey asked students to rank each item on a scale of importance and then according to their satisfaction level. Many of the items designated “important” or “very important” by Dordt students were also areas of high satisfaction, says Bos. He’s identified these items as Dordt’s “strategic strengths.” They included the following:

• Students are made to feel welcome

• There is a commitment to academic excellence on this campus

Bos has grouped items students ranked lower in importance but high in satisfaction as “performance bonuses”—things like helpful employees in the bookstore, excellent library resources, and student access to tutoring services. While not students’ top priorities, they help create an atmosphere that is welcoming, supportive, and student-centered.

“When we look at this list of strengths, we see just about every group on campus that interacts with our students,” says Bos. “That shows that the people who work here care—they care about students, and they care about doing their jobs well.”

Dean of Students Robert Taylor says Dordt’s survey results couldn’t have been achieved by just one department. They reflect a lot of dedicated people, doing a lot of hard work.

“It’s a well-coordinated, campuswide effort,” says Taylor, “and it’s held together by excellent communication and a shared commitment to creating an environment where students feel safe and cared for as well as challenged to ask questions and grow.”

In its breadth, the SSI is a well-suited measure of Dordt’s commitment to educating students as whole people, whose entire lives belong to God. Dordt’s success in fulfilling that mission doesn’t fit neatly into a bar graph or pie chart, but Bos says the SSI is a useful tool, not least because student satisfaction and retention are closely linked.

“Dordt’s results are overwhelmingly positive, but we aren’t treating them as simply a pat on the back,” Bos says. He has spent a lot of time putting the data into spreadsheets, crunching the numbers, determining what the college is doing well, and what it could do better.

Knowing what students care about can help the college prioritize what changes and improvements it makes in the future. Areas students rank higher in importance but lower in satisfaction have been identified by Bos as “satisfaction gaps.” He sees these as strategic opportunities for growth, and he’s been busy communicating his findings to the right people, in the right departments.

“The temptation, when things are going well, is to begin to take hard-won successes for granted,” Taylor says. He sees value in re-telling the story of who we are—rehearsing it—as a way to remember.

Surveys play a role in that process, he says, by recalling Dordt’s mission, and by pointing toward ways to embody that mission more fully.

In the hands of a wise interpreter, Dordt’s survey data takes something complex—student satisfaction—and simplifies it, assigning categories and number values to experiences to help Dordt’s administration form conclusions and, when necessary, take action.

Survey data can never tell the whole story, and Dordt’s results hint at a richer, more-nuanced picture of student satisfaction that emerges in the stories of students themselves.

Even the word “satisfaction” doesn’t quite cut it for senior Jeremy Vreeken—or, at least, it misses the point. Vreeken doesn’t value his four years at Dordt because they’ve been comfortable or convenient or safe. They’ve been precisely the opposite.

“I started college with the idea that I had to be certain about things,” he says. “My whole education has been a process of reframing what I thought I knew from the ground up.”

More than finding simple answers, his time at Dordt has been about learning to ask the right questions.

Vreeken, an English major, spent many semesters at Dordt involved in theatre as a lead actor and as a scenic designer. Over his four years, he served as editor of the Diamond, sat on Student Symposium, and was a co-editor and designer for Dordt’s literary magazine, the Canon.

Vreeken admits he came to Dordt somewhat reluctantly. “At that point, I was pretty dissatisfied with the church, and by what I thought Christianity was at the time,” he says. Vreeken grew up “in nondenominational circles” in Saskatchewan, Canada, and both of his older sisters attended Dordt.

His dad convinced him to try Dordt, thinking it might be helpful for him to encounter a Christian perspective that was different from the one he grew up with.

For his first two years, he considered leaving at the end of each semester. But slowly, he started to soften. His views became less firmly entrenched. He realized things were complicated, and he let go of the search for easy certainties.

That happened in his courses, but also in the push-and-pull of conversations with professors outside of class. In an April editorial in the Diamond, Vreeken wrote, “In my first year or two I was fortunate enough to find faculty who were willing to mentor an angry and confused freshman, affirm my questions, and direct my interests.” Back home, many of his peers had embraced a militant form of atheism, abandoning faith as something foolish and intellectually untenable.

After four years at Dordt, he sees that learning and faith aren’t fundamentally incompatible. It wasn’t always clear as it was happening, but in looking back on his experience—the course readings, the hours spent talking with faculty mentors, the late nights surrounded by sawdust in the scene shop—he can see how deeply he has been formed by this place.

“Some of the things I’m most passionate about, I learned to care about through conversations and classes at Dordt,” he says. He began to think about the environment in terms of stewardship, food systems in terms of sustainability, and poverty in terms of justice. He sees the value of an education in the person it has formed you to be. After four years as part of the community at Dordt, Vreeken is more thoughtful, and less sure. He’s more willing to re-think his assumptions, and to engage with others who disagree.

Seniors Abigael Olson and Lauren Eekhoff say being part of the Dordt community for four years led them to encounter a variety of perspectives and challenged them to reconsider their own.

“I didn’t come to Dordt expecting to be challenged so much!” Eekhoff says. “Everyone I talk to has a new perspective on faith, or a new way of thinking about something that I’d never considered before. It forces me to question what I think and form my own beliefs.”

Olson, too, has felt at once supported and challenged by the Dordt community. She’s from Atkinson, Nebraska, and she didn’t grow up in a Reformed tradition. “When I came to Dordt, it was a huge shock. I didn’t realize how Reformed Dordt was, or really even what it meant to be Reformed,” she says.

Over time, she says, she’s seen that reformational learning isn’t stifling or narrow. “After four years, I think everyone opens up to a little more variety in their understandings,” she says. “There’s room here for people with different backgrounds and beliefs.”

Both say Dordt’s close-knit community, along with the Core Program, helped broaden their social circles to include students from different backgrounds and majors. “Conversations with friends—after chapel, after church, after class—those have probably been most integral to my faith formation,” Eekhoff says.

Olson and Eekhoff, who is from Hull, Iowa, were roommates for three of their four years at Dordt, and both undertook rigorous programs of study. Olson was pre-med and graduated with majors in chemistry and Spanish; Eekhoff was pre-genetic counseling with a biology major.

The two have excelled academically, and they’ve found time to get involved with other activities. Olson sat on Student Symposium, served as a Learning Community Assistant, and was involved in Dordt’s sustainability committee, which has been working to make the campus more energy efficient. Eekhoff ran cross country for three years, served as a tutor and teaching assistant in the biology lab, and helped coordinate Week of Welcome activities. The two were teammates on a championship-winning co-ed intramural volleyball team.

They say graduating from Dordt is bittersweet, but they’re excited for what’s next. This summer, Olson will travel to southern Africa, where she’ll spend two years serving in conservation agriculture with the Mennonite Central Committee. After that, she plans to return to the states to attend medical school at Boston University. Eekhoff will begin a master’s program in genetic counseling at the University of South Carolina this fall.

“It’s so strange to think about leaving,” Eekhoff says. “After four years here, this place has started to feel like home.”