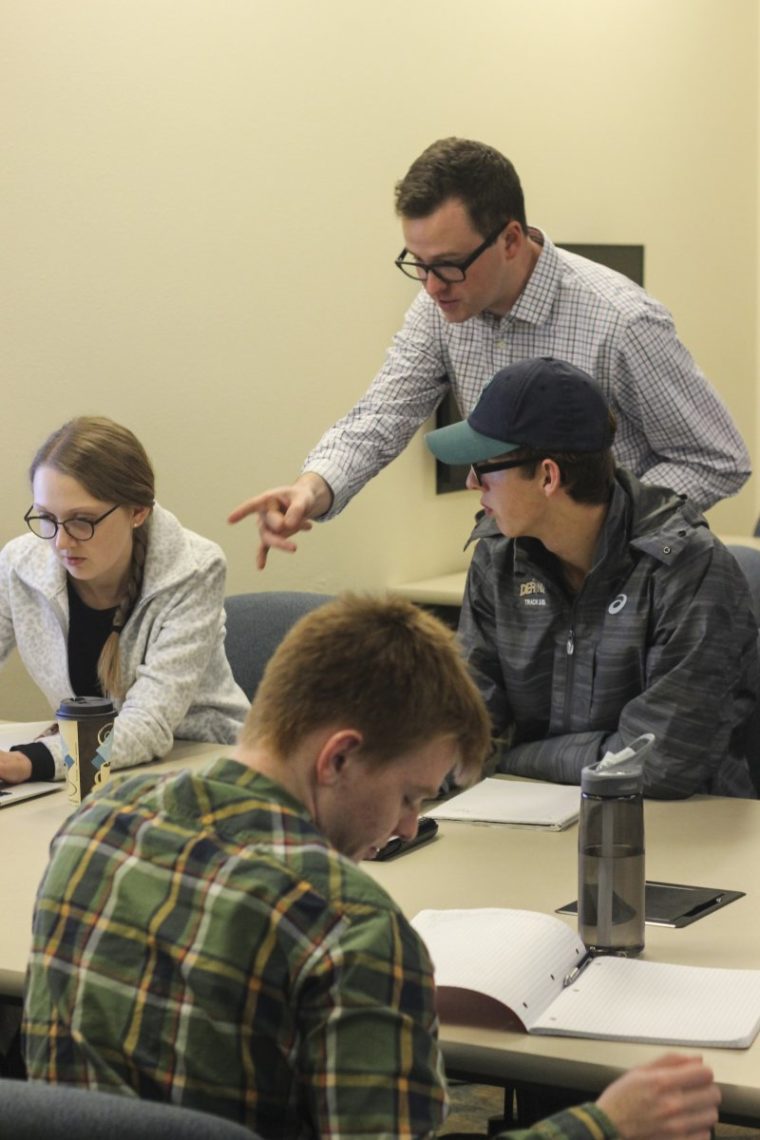 DISCRETE MATH FOR EVERYONE

Dr. Calvin Jongsma’s relationship with the Mathematics Department at Dordt has persisted into his retirement, and in addition to his Spot It! collaboration with Clark, Jongsma’s work has benefitted another new member of the department, Dr. Mike Janssen.

When Janssen started teaching at Dordt in the fall of 2015, he inherited Jongsma’s Discrete Math course. When Jongsma later asked him what he thought about the textbook he’d used, Janssen said he was underwhelmed. It was expensive, and the students weren’t particularly engaged with it.

Jongsma encouraged him to check out the discrete math text he’d authored himself, and used for decades in his own course, after he’d grown dissatisfied with the available options. When it came to teaching proofs and logical thinking, the other texts were a pedagogical mismatch.

“I kept contradicting the textbook we were using. Students hated that,” he says, laughing. So, he began writing his own and posted the pdfs online for free. Students responded enthusiastically, so he kept using it, tweaking and improving it over the years.

Janssen auditioned Jongsma’s text in his Discrete Math course this past spring. It appealed to him because it was free and open source, which would help keep costs down for his students.

“Plus, how often do you get to use a book that was tailor written for your course?” says Janssen.

So far, it’s gone over well with Janssen’s students. They’re not the only ones reading it, though, as Jongsma recently discovered. In fact, internet users across the world have been stumbling upon the book and downloading it from Dordt’s Digital Collections for their own use.

“People are reading it from all over the world—India, the U.S., Africa,” Jongsma says. “It’s a little perplexing to me. I have no idea who’s using it, exactly, or how they’re using it, or how they’re even finding it, except through Google and other search engines. It’s not advertised anywhere.”

Jongsma added the text to Dordt’s Digital Collections in January of this year; it joins the 40-some other articles and texts he’s published over the years. Since then, he’s used readership reports to track downloads of papers he authored on the site. In the last few months, he’s seen hundreds of downloads per month, most of them chapters of his Discrete Math text. Since January, chapters from the book have been downloaded more than 4,500 times at more than 350 institutions in more than 75 different countries.

At the moment, Chapter 7 of the digital textbook is ranked number one in the list of Most Popular Papers downloaded from the site, which hosts thousands of publications. Jongsma is pleasantly surprised. “I guess that’s not too shabby given its highly technical nature and the fact that it’s aimed at a fairly specialized audience,” he says.