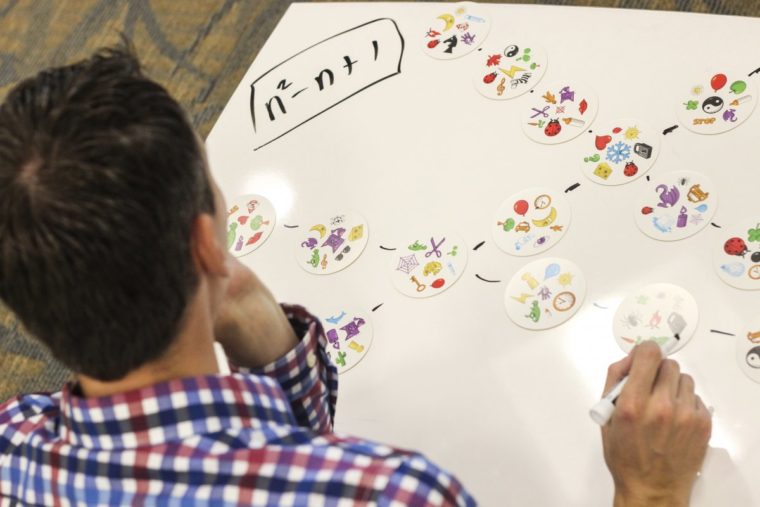 MATH AND MYSTERY IN A GAME OF CARDS

After Christmas dinner last year, Dr. Calvin Jongsma and his granddaughters sat around the dining room table, playing a simple card game called Spot It! Others in the house were napping. Dishes were stacked in the kitchen. Jongsma, a retired Dordt mathematics professor, watched as his granddaughters each flipped a card, then rushed to match one of its colorful symbols to the card at the center of the table. Each player would have a unique match; the first to spot the match kept the center card.

Amid the flipping and laughing and shouting—Anchor! Lightbulb! Ladybug!—Jongsma started to wonder.

How does this game work?

How is it that any pair of cards in the deck of 55 would have one—and only one—matching symbol?

Would it work with five symbols on each card instead of eight? Nine?

This is what it is to see the world through the eyes of a mathematician.

“Problem-solving requires imagination,” Jongsma says. “It’s a common misperception that if you’re really imaginative, you go into the arts. But imagination is just as important in mathematics and the sciences. It’s the only way to problem-solve.”

It’s this sort of imaginative problem-solving that builds bridges and designs financial systems. It can also unlock the mystery of a children’s card game.

“I started looking for patterns,” Jongsma says. “I wanted to know what made this game tick.” He began working systematically through the questions, exploring the relationships between variables in the game. This wasn’t textbook math—there was no answer at the end of the book. This was math from the ground up.

In Spot It!, the symbols on each card are bright and cartoonish. The concept is simple—a small child could grasp it. But as Jongsma continued to ask questions, he began to discern the outlines of a sophisticated mathematical structure hidden within the game.

He made that structure visible by creating a chart, with rows for each of the game’s cards and numbers assigned to the symbols. Working methodically, he plotted cards in groups sharing a particular symbol. To be sure they had no more than one symbol in common, he entered symbols in a diagonal pattern. The resulting algorithm helped him design a game with four symbols per card—or six or eight. But it only worked for certain values.

Wanting to share the fun and expand his resources, Jongsma sent an email to the Dordt Mathematics Department, issuing a friendly challenge: “How can you make a matching game in which any two cards have the same number of different symbols but exactly one symbol in common?”

He told them he had a solution—but it had limits. Whenever the value of s, representing the number of symbols per card, was one more than a prime, the algorithm worked. For other values, though, it didn’t.

Included on the email was Dr. Tom Clark, the professor who stepped into Jongsma’s position after he retired in 2013. Clark was intrigued. He’d never heard of the game, but he started typing search words into Google, curious if anyone had worked on the problem.

As it turned out, there was online literature about it. A key to explaining the hidden structure in Spot It! was projective geometry, a branch of mathematics with unlikely roots in Renaissance perspectival drawing. Unlike Euclidean geometry, the more familiar form taught in high schools, projective geometry sets out different rules, or axioms, about how points and lines relate to one another in space.

“In Euclidean space,” Clark says, “parallel lines never intersect.” But in projective geometry, there are no parallel lines; every pair of lines must always intersect at one and only one point.

“That right there—that’s all you need to know to see projective geometry at work in the game,” Clark says.

By translating the game of Spot It! into the language of projective geometry, Clark was able to state in mathematical terms how the game worked. Clark and Jongsma went back and forth over email, refining an argument about the game’s possible parameters and considering its potential as a teaching tool. They both saw Spot It! as a way to bring a more interactive, inquiry-based mathematics into the classroom.

For mathematicians like Jongsma and Clark, math begins with curiosity and questions. “When I look at the game of Spot It!,” says Clark, “it’s not immediately obvious to me how it works. I say, ‘Hmmm, I wonder how that works?’”

It’s this movement—to wonder—that drives mathematicians to seek answers. Clark often describes it this way: “Robert Frost famously said that poetry begins in delight and ends in wisdom. For me, mathematics begins in wonder and ends in understanding.”

Math isn’t just a process of working through a set of predetermined operations to get the right answer. When taught well, mathematics involves wonder, surprise, even delight.

Jongsma and Clark introduced Spot It! to a group of area K–12 math teachers, who convene on Dordt’s campus once a month for a Math Teachers’ Circle. Clark has led this circle for two years, having led another circle while a doctoral student at the University of Nebraska in Lincoln.

“Our goal was to give these teachers an experience with math based in inquiry—to show them how to start with a question and not the answer,” says Clark.

Unlike the systematic approach of most textbooks, inquiry-based math is messy. It takes time. Students might reach a dead end and have to scrap their work and start over. It requires perseverance, and the ability to recognize when concepts from algebra or calculus—even number theory—might come in handy.

Teachers in Clark’s circle sat around a table covered with Spot It! cards, and he and Jongsma led them through some of the same questions Jongsma had asked himself that Christmas afternoon, sitting at the table with his granddaughters.

Are there the same number of symbols on each card? Why?

How many cards are in the deck? Could there be more?

Next, they tried to solve the problem by simplifying it, building matching games for cards with only two symbols, then three. After working their way through the algorithmic solution devised by Jongsma, and coming up against its limits, they moved to reformulating the game using projective geometry.

The teachers at the circle responded enthusiastically. It went so well, Clark and Jongsma decided to collaborate on a paper, which was published as a resource on the Math Teachers’ Circle website. Clark went on to present the paper at MathFest, the annual summer meeting of the Mathematical Association of America (MAA), held this year in Columbus, Ohio.

“Math begins in wonder,” says Clark, “but it’s curiosity that pulls you through the process. Someone like Cal sees a game like Spot It!, and he wants to figure it out. That quality—that curiosity—is one of the most important traits of a mathematician.”

While the goal is understanding, says Clark, sometimes a problem like Spot It! leads you right back to where you started, with wonder.

There isn’t a supercomputer in the world that could run through all the possible permutations of cards and symbols in enough time for us to ever know the answer. It’s a matter of humans coming up against their limits as finite creatures.

“Sometimes in math there is no answer,” says Clark. “God knows, I suppose, whether a Spot It! game can be made with 13 cards. But we don’t. And we maybe never will—though I hope someone figures it out.”