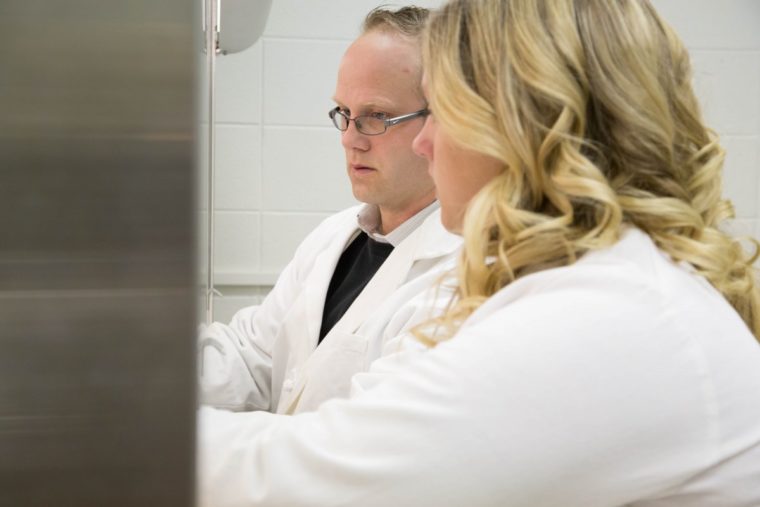 “This picture doesn’t fit with the way students understand the world,” says Dr. Robbin Eppinga. That dissonance leads the class to consider how Christians ought to read and make sense of Scripture, especially passages that appear to contradict modern scientific understanding.

These kinds of questions can lead to a crisis of faith. But Eppinga says Christians don’t need to be afraid of them. When handled carefully, they can deepen and enrich students’ understanding of both biblical interpretation and scientific exploration.

“We need to be humble enough to say that as finite creatures, we don’t have all the answers,” he says. “But we are privileged to live in a time when we can ask these questions—and we can seek honest answers.”

Supporting this kind of engagement is the aim of a new, grant-funded project, led by Eppinga, which will bring questions of science and faith to a broader audience of Christian adults. The $25,000 grant was awarded to Dordt College by the STEAM Project, a partnership between Fuller Theological Seminary and the John Templeton Foundation. Eppinga will lead a team of Dordt faculty, area pastors, and a Dordt biology student to develop online resources for college and post-college ministries in equipping Christian “emerging adults” (18 to 30 years old) to navigate complex questions at the intersection of faith and science.

“We have a lot of room for improving the way we engage these questions in our churches, in Christian schools, within families,” says Eppinga. “These resources are intended to create a space to ask questions, examine evidence, and explore implications.”

This is the approach Eppinga models for his students in discussing Genesis 1. After sketching out the picture of a flat earth and domed sky, he has them read the passage again, “this time looking for repetition.”

“In Genesis 1, God looks at one segment of creation and calls it good, then looks at another, and calls that good, too,” Eppinga says. “The narrative moves toward Genesis 1:28 and 2:15, where God entrusts us, as human creatures, with the responsibility of caring for and cultivating the earth and everything in it.”

In this way, Eppinga prompts students to take a step back and look at the way they look at the Bible.

“Leviticus says insects have four legs. The story of Jacob suggests that coat patterns in goats can be influenced by what a female goat sees, and observing strips of white bark can lead to striped offspring,” Eppinga says. Neither of these statements reflects what we know about species classification or genetic inheritance.

“But does that mean the Bible is a lie or untrue?” Eppinga asks. “No. It simply suggests that the Bible wasn’t meant to be a science manual. Instead, there’s a deeper theological truth revealed in the text—a deeper truth about God and God’s relationship with the created world.” The story about Jacob breeding goats isn’t a set of instructions for animal husbandry, he says. It’s a story about God’s faithfulness in taking care of Jacob.

Junior biology major Lydia Marcus, a member of the grant team, has spent her three years at Dordt engaging questions of science and faith under the guidance of professors like Eppinga. Marcus first seriously considered the scientific theory of evolution in Eppinga’s Zoology class.

“Evolution is the scientific concept that really got me thinking about the difficulties of integrating faith and science,” Marcus says.

Interested in exploring these tensions further, she picked up a book about evolutionary psychology, which set out to explain human nature and behavior in purely evolutionary terms.

“It really troubled me,” Marcus says. “The author put forward a very thorough argument about how God and religion are out of date, and as a race, we need to grow up. He argued that we should look to science to guide our morality, not myths and religion.”

She brought some of her questions to Eppinga. “I felt rattled by the book,” she says, “and I wasn’t arriving at very complete answers on my own.” Together, they worked through questions about how to read Scripture and reconcile it with what scientists have observed in the natural world.

“At Dordt,” Eppinga says, “we proceed from the conviction that all truth is God’s truth, revealed to us through both nature and Scripture. There should be no fundamental conflict between science and the Christian faith.”

Over time, Marcus began to develop a more nuanced approach to interpreting the Bible. She also learned to make distinctions between evolution—a biological process of adaptation and change—and evolutionism, an ideology that advances claims about human nature and origins that can’t be confirmed or denied using the methods of science.

Marcus has been putting this perspective to work among her peers, leading science-faith integration efforts in and out of the classroom. She leads Dordt’s Faith and Science Club, and she organized a book club for Eppinga’s Zoology students last spring.

Together, they read The Sixth Extinction by Elizabeth Kolbert and considered how Christians should respond to theories about ongoing mass extinctions or the effects of climate change. Marcus also led a group of core science students through a book about creation care this fall.

“It’s been really neat to see my peers think through these issues,” she says. “Being part of the book clubs helps us see it’s valid to struggle through these kinds of questions—that others are doing it too—and even if you come to the end of the process without all the answers, at least you’re not alone. That’s a really big deal.”

In partnership with Eppinga, Marcus has developed a survey that measures faith maturity and its relationship to student perspectives on science. It will be administered to students in Eppinga’s first-year biology course, then again when they take his zoology course the next semester.

Marcus’s survey will also measure the effectiveness of the science-faith integration resources developed by the grant team, which will eventually be available for free download online.

“I’m excited for these studies to be made available to a wider audience,” she says. “I’ve been very blessed by Dordt’s science program and my science professors. They really care about helping students wrestle with how to integrate faith and science. But many people don’t have access to that perspective—they don’t know it’s okay to ask questions. It’s okay to struggle with these things.”

Ultimately, Marcus says scientific study has enriched her faith—but she has also come to accept there are limits to its explanatory power.

“Faith is faith. You can’t judge faith empirically, and that’s okay,” she says. “Science is really cool—it’s necessary and important. But it can’t explain everything. As Dr. Eppinga often reminds us, our value ultimately is in Christ.”