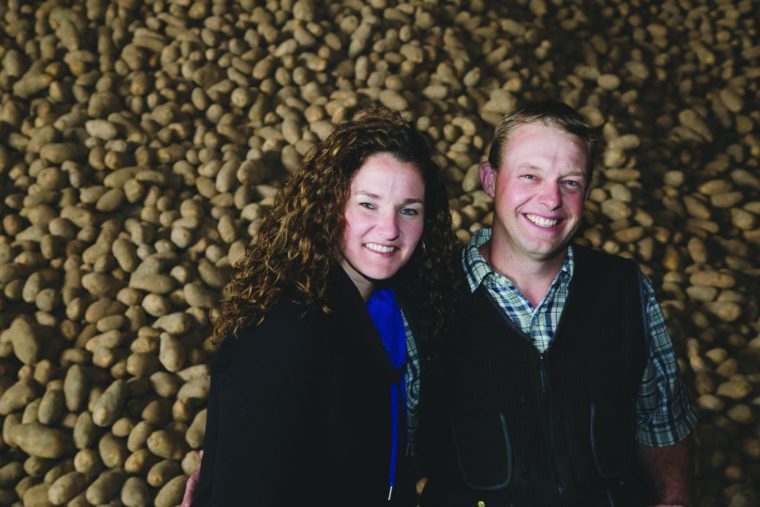 At the end of a long day on the potato farm, with five kids in bed, Jason and Yvonne (Vaags) Kimm have plenty of good humor to share, peppered with words of wisdom and stories from their two decades together.

The Kimms, who both graduated in 1998, are the 2016 recipients of the Dordt College Distinguished Alumni Award, and (surprise!) they met at Dordt.

“I fell hard for him; he swept me right off my feet,” Yvonne says with a smirk. The years have brought perspective and healing, but it’s not an easy topic for Jason, who accidentally dropped Yvonne on her head during a country swing dance. “There are some memories you don’t like to relive,” he says.

But Yvonne insists that God used the challenges they encountered as she lay in the hospital for a few weeks—“he fell in love with me sitting by my side at the hospital”—to bring them together and strengthen their relationship.

It’s one instance where the words of a favorite passage from Ephesians ring true. “What a comfort to know that God had and has all things planned out for us, long before we even begin the journey,” Yvonne says.

After the accident, it was a struggle to get back on track, but they both graduated—Jason with a major in agribusiness and Yvonne with a major in English (secondary education) and minors in communication and theatre. They found work in Montana, where Jason and his family farm potatoes, a legacy passed on from his grandfathers and his father. Yvonne taught high school English at Manhattan Christian School. In 2000 they were married.

“I taught for five years, and we had five miscarriages,” Yvonne said. “It’s part of our story. God uses all things, even those that are really hard.” She stopped teaching, when their oldest son, Willem, was born. Down to one income, they looked for creative ways to bring in extra money. On a small plot of land next to their new house, Jason grew a few potatoes with compost.

“We wanted to bring manure back to the farm, so we made a deal with a local dairy farmer to compost his manure,” he said. “I wanted to make sure that the herbicides would not persist in the compost, so we used that area as a test plot.”

They were pleased with the first year’s results. So, on Yvonne’s birthday, Jason took her to one of the nicest restaurants in Bozeman and let the server know his wife wanted to talk to the chef about her potatoes and whether he might be interested in buying some.

“He said he’d love to try a sample,” Yvonne said. They soon had two grocery stores and one restaurant as buyers, with requests for the next year as well.

In 2006, the organic part of the farm received organic certification, and in 2012-13 they received Montana seed potato certification. Jason’s compost tea and the farm’s change to farming sustainably also led to the National Potato Council’s Environmental Stewardship Award in 2012. Kimm TEA LLC continues to make compost tea for their farm and provides biological products and consulting to others.

Yvonne and the kids work together every week on potatoes. The children work hard and make a meaningful difference.

“I was joking with someone the other day that when my kids grow up and look back on their childhood, their only memories will be in the potato washing shed,” she says. But as anyone with children knows, time spent working with your kids can be the most precious and lead to the best conversations.

The organic potato farm and Jason’s compost tea and biological consulting grew naturally out of their circumstances and experience, but Jason says it surprised some of his former professors.

“When I was at Dordt I was pretty conventionally minded,” he said. “A number of the professors would have never expected me to be doing the things I’ve been doing now.”

Both Yvonne and Jason also had some health issues that were relieved by a diet based on whole foods, and it influenced their thinking about their work.

“As I started seeing relief, I realized it was just food, good food,” Jason said. “If food is doing this, what are we doing that can help people? We’re a high generation seed farm. The nutritional value we offer is important both for food and for seed.”

At the same time, the area they farm had a close encounter with potato blight that Jason says helped him see that chemistry might not always be the right solution. When an Idaho consultant suggested spraying natural plant microorganisms on the leaves, “I thought that was crazy. It was never going to work.” After a lot of reading and research, and after meeting many “good, smart people who’d spent their lives thinking about and doing agriculture in a very different way,” Jason says they experienced a paradigm shift.

“By God’s design, things came together so all of these factors were in play. Otherwise there wouldn’t have been enough reasons to change. We went from ‘way right’ to ‘way left’ thinking, and now we’re maybe back to the center a little more,” Jason says.

“We spent a lot of time thinking about how to interact with a creation that suffers the effects of sin and the curse of fall,” he says. “When we do agriculture as broken humans, how do we respect the best of conventional and traditional agriculture? Both science and heritage wisdom play a role.”

The Kimm organic operation takes just nine acres, half of which is green-cropped every year for fertility and soil microbiology management. It provides seed for potatoes grown in the Pacific Northwest and for Montana gardeners

As the Kimms look back, they’re thankful for many things. Jason appreciates that Dr. Chris Goedhart encouraged him to work on what interested him, which happened to be potatoes.

Yvonne says Dordt friends and professors are still like family to her. Her dad died when she was 15, and Dr. Charles Veenstra “sort of took on a role as second father.” When she was teaching, each year during the first week of school, Veenstra would call or email to tell her he was praying for and thinking about her.

Other stories about Christian community, growth, and a profound gratefulness for their blessings spill over.

“Most of us think far too much of ourselves and far too little about God,” Yvonne says. “He has accomplished these things for his purposes.”

Jason concurs. “God uses ordinary people in very ordinary sorts of ways. I hope that’s what people can gather from our award this year.”