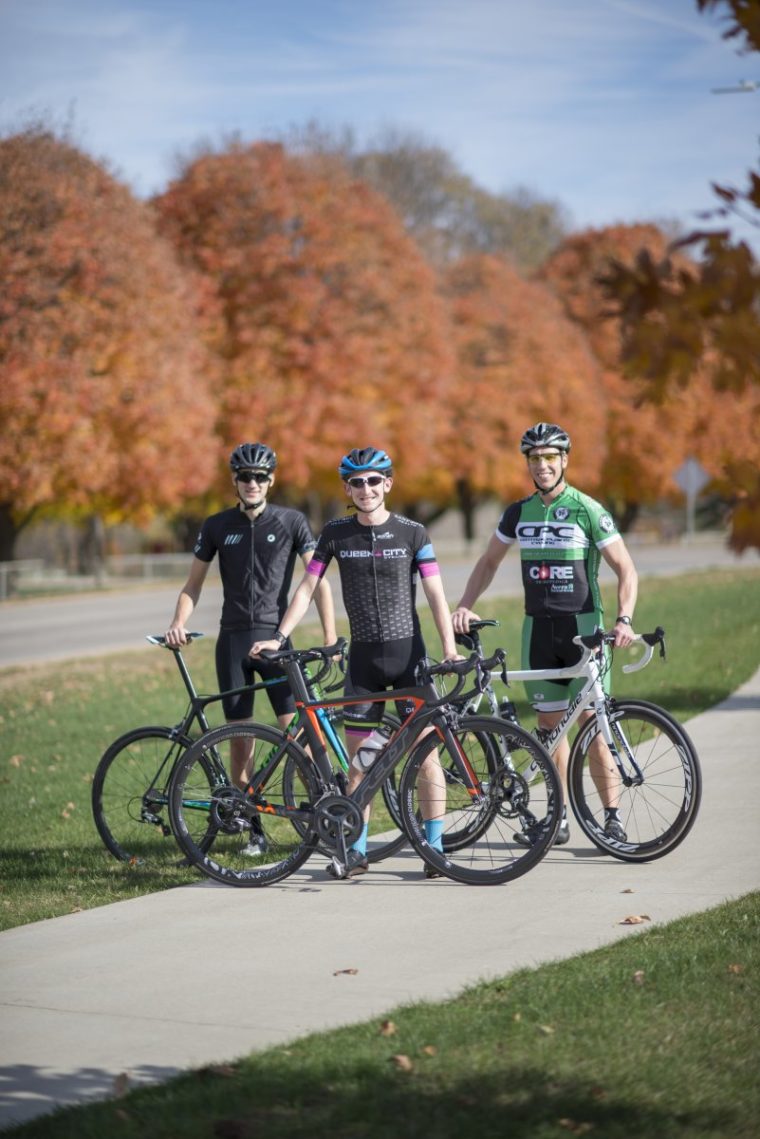 COMPETITION AND COMMUNITY IN THE WORLD OF CYCLING

The world moves by quickly on a bicycle. Well, it does when you’re Eric Tudor. Most afternoons, Dordt’s assistant director of admissions dons his helmet, clicks his shoes into his pedals, and sets out, flying past houses and mail boxes, beneath shade trees, toward the highway and fields beyond town. Blink once and he’s gone.

“For that hour, or two hours, everything slows down,” Tudor says. “I can’t really do anything else. I can’t have my phone in my hand, I can’t do grad school work. I think about one thing at a time.”

Slowing down, in this case, involves moving very fast. On an ordinary ride, Tudor reaches speeds of more than 40 m.p.h. It’s an elegant marriage of human and machine.

Tudor spent 10 years competing as a distance runner. At one point during his four years on the Dordt cross country team, a foot injury interrupted his training. “I spent a lot of time on an exercise bike,” he recalls. One day, staring straight ahead, going nowhere, he thought, “Well, this is kind of boring. What if I bought an actual bike?”

He bought one, and it sat in his garage for four years. That changed in 2012, when he graduated from Dordt and started to work as an admissions counselor. He learned from Jon De Groot, an avid cyclist and Dordt’s director of campus ministries, that there was a thriving cycling community on campus.

Tudor started logging miles on his bike, sometimes alone, sometimes with a group of Dordt colleagues and alumni. Eventually, for fun, he signed up for a nearby race. “After that, I was hooked,” he says.

Now he competes as a cyclist touring the Midwest. Recently, he upgraded to the highest division of racing, where he’s matched against some of the most competitive amateur and professional cyclists in the country. He also belongs to a Sioux Falls-based cycling team, Queen City Cycling, and he travels to Sioux Falls to train with them on weekends.

This summer, he competed for the third time in the Midwest Flyover Championship Series, which includes six weekend-long races in cities across the Midwest. The series, considered to be some of the best amateur racing in the country, attracts teams from 13 U.S. states and Canada. Two summers ago, Tudor won the series in a lower division. This year, he won events at each of the three weekends he was able to attend, placing fourth overall despite competing in only half of the Flyover events.

Tudor is somewhat unusual in the world of competitive cycling. He’s mild-mannered and slight of frame. He almost never speaks loudly. Cycling, by contrast, can be coarse and cutthroat. It’s also dangerous, with competitors maneuvering in tight packs at high speeds. It draws thrill-seekers and the affluent, partly because racing bikes and equipment cost well into the thousands.

“A lot of people call it the affluent man’s adrenaline high,” says Tudor. “When I was a distance runner, I really enjoyed the spirit of camaraderie. Runners tend to be very supportive of one another—even competitors. The culture of cycling is different.”

The demands of competition are different, too. Racing on two wheels is more strategic than racing on foot. You don’t simply lock into a pace and pound out the miles. Teammates often draft for one another, sharing the burden of the wind or positioning their strongest teammate for a top finish. Competitors also broker deals, shifting alliances based on elevation, wind, and their uneven impact on speed.

“Cycling is a very political sport,” Tudor says. “Since I’m a smaller guy, I do well on hills. So I might agree to draft someone up a big hill in exchange for their help on a straightaway.”

Races often take hours, and the atmosphere is intense. “It gets heated and, frankly, pretty vulgar,” Tudor says. While many employ verbal intimidation tactics, Tudor prefers to remain stoic and focused. He often strikes out on his own ahead of the pack, sacrificing the wind protection fellow cyclists provide.

“It’s an all or nothing strategy,” he says. “Either you’re fast enough that you win the race, or you can’t sustain it, and you come in dead last.”

CULTIVATING A COMMUNITY AT 20 M.P.H.

The world of competitive cycling often rewards aggression and intimidation, but the group of cyclists Tudor joins for long rides on Saturday mornings have built a culture on a different set of values.

These rides aren’t about winning, and even cyclists of different speeds and ability levels can ride together. “If one person is a stronger cyclist, they can be up at front, pushing the wind for everyone else,” Tudor says.

In the winter, relative speed matters even less. Tudor has transformed his basement into a stationary cycling gym, where cyclists gather during the coldest months. They set up their trainers, and everyone rides at their own pace, talking or watching television together on the 12-foot screen Tudor mounted to his basement wall.

De Groot, who first turned Tudor on to cycling, has been with the Saturday morning group from the beginning. A former competitive cyclist and now a triathlete, De Groot has participated in several Iron Man competitions, which involve running a full marathon, swimming 2.4 miles, and covering 114 miles on a bicycle.

De Groot says the Saturday morning rides are good training, but they’re also a catalyst for good conversation. Out on the road, as the sun rises and fog settles in the low places, the group has slowly cultivated a community of mutual trust and support. It’s also a great opportunity to spend time outdoors, De Groot says.

“It’s just beautiful out there, covering miles on a bike,” he says. “You see the countryside through a whole new lens.”

Over the years, De Groot has logged thousands of miles with some of the men in the group. They start in the spring with 25-mile rides and work their way to 60 by fall. The time and distance give them room to ease into talking.

“Sometimes, it takes 14 miles before anyone says anything,” says De Groot. “Then suddenly, someone will open up about something. They might share about a fight they had with their wife, or a fear they have about their career.”

Tudor, too, says there’s something about riding for miles with others that causes a shift in conversation.

“On the road, I feel more able to have open and honest conversations,” he says. “Most of the men I ride with are older than I am, and they have a lot more wisdom than I do. I’ve learned a lot from them.”

For Tudor, it’s a welcome break from the culture of competitive cycling, where individual egos trump the value of the collective and conversation is governed by intimidation more often than vulnerability.

“For me, the camaraderie that we sing about in the Alma Mater is most alive when I’m sharing life with those guys on our bike rides,” Tudor says. “We can be vulnerable, encouraging, and experience God’s creation all at once.”