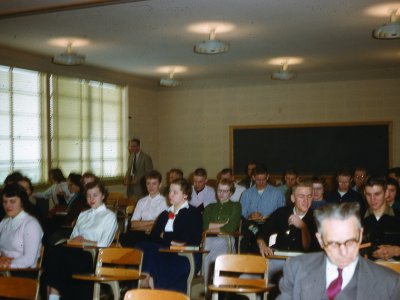 DR. DOUGLAS RIBBENS, A FOUNDING FACULTY MEMBER OF THE COLLEGE, DIED IN AUGUST 2016 AT AGE 89.

Ribbens served Dordt College for 37 years as professor, registrar, director of admissions and financial aid, academic dean, director of the library, and vice president for academic affairs. He played a major role in shaping and running the young institution as it moved from a junior college with fewer than 100 students to a thriving four-year college of more than 1,200. Today his name, along with that of his wife, Henrietta, appears on Dordt’s main classroom building.

“With Doug Ribbens’s passing, most of the founders of the college are gone,” said President Erik Hoekstra. “We give thanks to God for the lives and vision of these pioneers.”

Ribbens began teaching on the first day of classes in 1955. He set a high bar of excellence for himself and for the college.

“He always pressed us to grow, not just in student numbers, but in reputation as a quality Christian college,” said Hoekstra, noting that even in retirement, Ribbens wanted the founders’ vision for a biblically grounded education in all areas of life to remain central at Dordt College.

Ribbens was Dordt’s first education professor and was instrumental in laying out the early curriculum, serving as chair of the curriculum committee until his retirement. His varied titles don’t begin to describe the tasks he performed, however. In a 2009 Voice interview, reflecting on his years at Dordt, Ribbens described himself as the “utility infielder.”

So began an administrative career that spanned his professional life. He scheduled classes, supervised faculty, wrote North Central accreditation reports, submitted grant applications, managed the library, wrote computer programs to manage institutional data, and encouraged faculty to work out their Christian vision for the education they offered in their classrooms.

Dr. John Van Dyk, emeritus professor of philosophy and education, has used the term “practical realist” to describe Ribbens, noting that Ribbens pushed the college to put its vision into writing. “The Educational Task of Dordt College” was written under his watch and with his encouragement.

“Administrators and presidents don’t constitute a college; the faculty does,” Ribbens once said, believing it was his role as administrator to make it possible for the faculty to do their work. He expected much from them, but he also gave much and was a vigorous proponent of their role at the college.

“He had a heart for people who could be touched by the college’s mission and would bend to accommodate that,” Zylstra added, recalling the testimony of students who have told him of the “second chance” Ribbens gave them.

Today, the Douglas and Henrietta Ribbens Academic Complex honors the couple’s contribution to the college, including their financial contributions. Throughout his life, Ribbens continued to believe that a broad education that helps students develop a strong world- and life-view is the best preparation a student can have upon leaving college. To help make that possible, he and Henrietta funded several Ribbens Elementary Teacher Education Scholarships for Dordt students.

Ribbens kept a relatively low profile during his years at Dordt, but his visionary and administrative contributions played a major role in what Dordt College became during his 37 years of service and in what it is today.