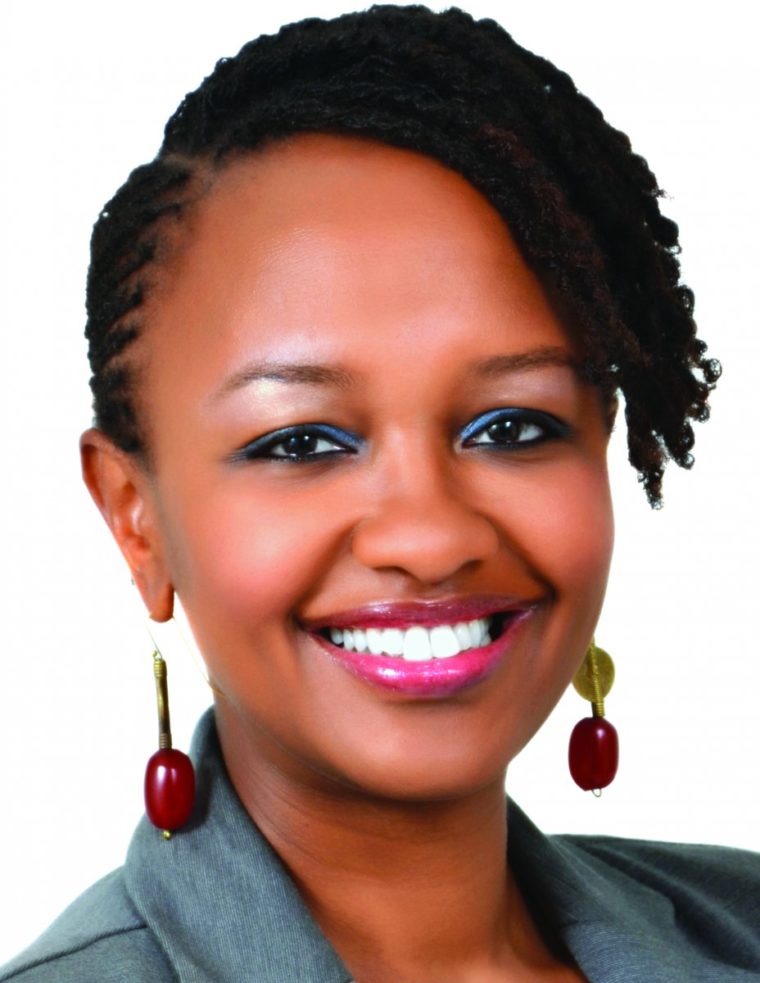 EUNICE MUTHENGI AT WORK IN KENYA

Eunice Muthengi (’01) remembers the moment she decided to change her major. It was at a Students Without Borders Club event, a model UN gathering of international students from Iowa colleges and universities.

“As we sat there discussing global policy issues, I realized how much I wanted to be involved in making change, to be a voice for other African women and girls,” Muthengi says. “I basically came back from that conference and went straight to my advisor and said, ‘I need to change my major. I need to be a change agent. That’s what my passion is, and I need to be a leader in helping to change things in Africa.’”

Muthengi tried to decide what kind of background might prepare her for that work: “Political science didn’t feel quite right; psychology felt too individual,” she says. “We ended up deciding on social work because it was a mix—some political science, some sociology, some psychology. I was especially interested in the macro level, how to bring change on the community level.”

It’s clear from just a short conversation with Muthengi, who is an associate at the nongovernmental organization Population Council in Kenya, that she is intelligent, competent, and cares deeply about the people she is trying to help. Speaking over Google Hangouts, her passion for her work is as clear as her voice, even from half a world away.

Muthengi wants to make the lives of girls in sub-Saharan Africa better in every possible way. As deputy team leader of the Adolescent Girls Initiative-Kenya for the Population Council, she conducts field research to determine which initiatives most improve the lives of adolescent girls in sub-Saharan Africa. This is a four-year randomized, controlled trial that tests the best package of intervention strategies for helping adolescent girls live better lives.

“There are a lot of organizations doing aid work, humanitarian work, implementing programs in Africa. If you’re trying to reduce school dropouts, and you spend all this money implementing the program, and only a small percentage of girls stay in school and you can’t significantly reduce the number of girls dropping out, you have very good intentions but no results. We don’t want to waste funds by implementing programs that don’t reach as many people as a different approach would,” she says.

A data-based approach requires good research, and that is Muthengi’s specialty. “We’re almost ready to collect baseline data for evaluating the Nia Project,” she says. In that trial, girls in 140 schools received either pads for menstruation, a reproductive health education component comprised of facilitated sessions and a health magazine, or both.

“There have been a lot of policies and programs around providing sanitary pads in schools,” she says, but there is a lack of rigorous evidence on whether providing pads will improve attendance and reduce school absences. This study will determine the impact on education outcomes, as well as increased self-sufficiency and improved reproductive health knowledge and behaviors.”

The trial will be conducted in Kilifi, in the coastal region of Kenya, an area with low retention rates from primary to secondary school, high percentages of teenage pregnancy, and high levels of poverty. “If interventions are shown to be effective here, they could be scaled up to other areas in Kenya,” Muthengi says.

Some of Muthengi’s research also looks at how to engage boys and men in a way that will improve gender parity and reduce violence against women.

“Adolescent girls are really vulnerable, and my focus is on how we can design programs that will best meet their needs and give them the skills they need to navigate the challenges they face.” Those challenges include early marriage, violence, poverty, lack of education, poor health, and lack of reproductive health education and services.

Muthengi felt well prepared for the work she does, in part thanks to professors at Dordt who encouraged her to customize her course work in a way that allowed her to pursue her passions.

“Whenever I had an opportunity to write a paper, I’d look at issues of women’s economic development in Africa and women’s health in Africa,” she says. “My professors encouraged me to feel free to bring in any international issues and learn about what was going on in Africa when we were looking at U.S. issues.”

Muthengi graduated from Dordt in 2001 and was accepted into her first-choice graduate school; she earned her MSW in social and economic development from Washington University in St. Louis. Following graduation she earned a Ph.D. and MPH from the Community Health Sciences Department of the University of California, Los Angeles (UCLA). While at UCLA, she landed a research internship at Population Council in Nairobi and was hired after finishing her degree in 2010.

Muthengi enjoys working for the Population Council and appreciates its data-driven approach.

“One of my main passions, which has really driven my career, is the importance of developing programs that actually work, and being able to use best practices and evidence to design programs and policies that help people,” she says. “So, for me, working at Population Council to use evidence to drive the agenda forward, to influence program design and policy for impact on a global scale—that’s very in tune with my own mission and goal, and it’s why I do research.”