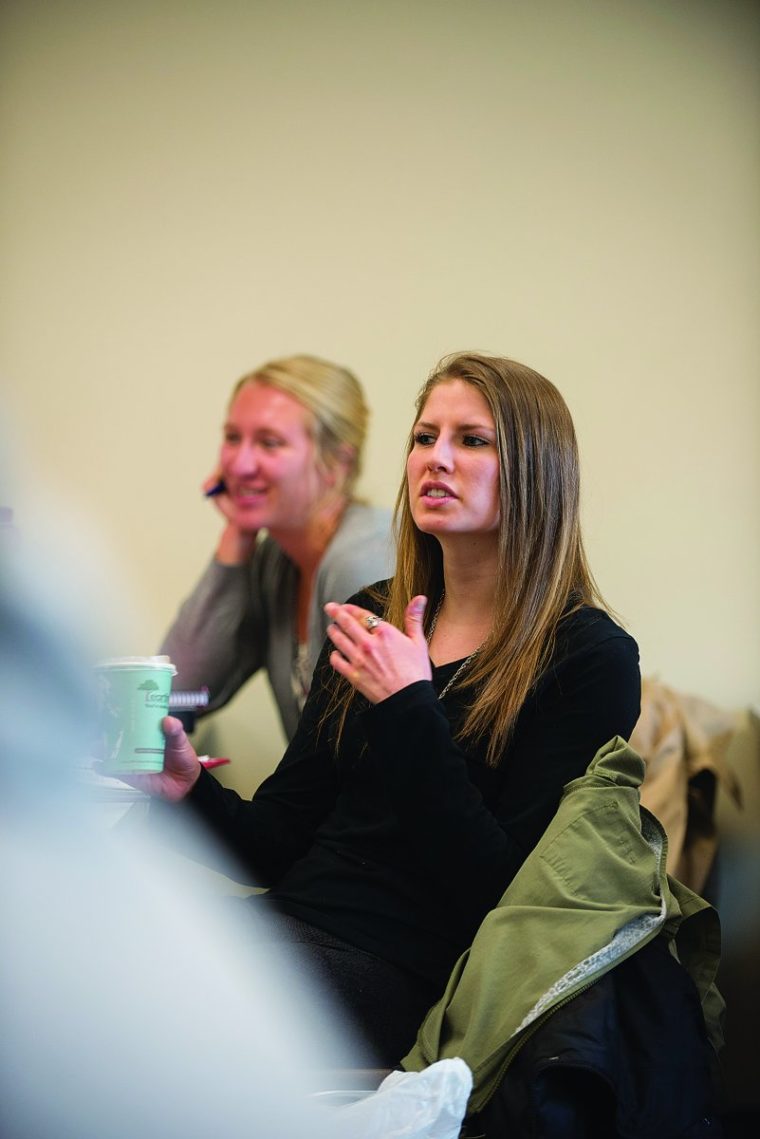 When new students arrive on campus each August, they show up in force, crisscrossing lawns and sidewalks, carrying laundry baskets, struggling under the weight of plastic crates full of books. The parking lots are packed. Vehicles host odd configurations of boxes, futons, wastebaskets, lamps.

It’s a zoo. Parents pitch in with the heavy lifting, but eventually they coalesce into little groups and stand watching, somewhat removed, not sure where to stand.

Each year’s crop of new Dordt students comes from across the country and around the world. They represent a variety of cultural backgrounds, have been nurtured within an increasingly diverse assortment of church communities, and are destined for dozens of different majors and programs.

But for all their differences, each of these new students has one thing in common: a single line on their Fall semester course schedule, “Core 100: Kingdom, Identity, and Calling.”

Core 100 is the 12-week course that initiates first-year students into Dordt’s academic and spiritual community. Professors from across disciplines take groups of 20 or so under their wing, walking them through the nuts-and-bolts of registration and, more importantly, grounding them in the language, concepts, and stories of the Reformed tradition. It’s some students’ first introduction to the breadth of a Reformed perspective, and it provides a foundation for the rest of their studies at Dordt.

“If that foundation had not been laid that first semester, college life would have been a lot harder,” says Victoria Cast, now a senior. “Core 100 was my first sighting of the thread that’s woven through every class here at Dordt. I looked forward to each class period because—even in the middle of the stress of college life—it brought my focus back to what was important: God’s kingdom and his calling and purpose for my life.”

Dordt Business Professor Shirley Folkerts has been teaching the course since 2008. She says it requires some patient hand-holding: “Students are learning to navigate the stresses and new responsibilities of college life, and this course helps them to get their feet on the ground their first semester away from home.”

But Core 100 is also meant to open students to the big, wide world of intellectual inquiry and to help them begin to see how that inquiry can be guided by a reformational perspective and rooted in the shared life and worship of the campus community.

“Core 100 helped take the stress out of choosing a major,” says sophomore Anna Christians. “When I started college, I thought I needed to know exactly what I was going to do with the rest of my life. I felt like I had to figure out exactly what God willed for me in choosing a major and that my major should lead right into a specific career path.”

In Core 100, Christians began to situate her story within a bigger story—God’s story—and she grew to understand that “all of life is mission.”

“We talked a lot about vocation in class, and I learned there’s no separation between work and our calling. You can be part of God’s redeeming work in the world no matter what job you’re doing or what major you choose,” says Christians.

That freedom—to choose a course of study knowing that, ultimately, all of life belongs to God—is what Folkerts hopes students will take from the course.

“For some students, this is the first time they’ve thought deeply about what we mean when we talk about ‘the kingdom of God’ or asked questions about what that means for how they live as Christ’s disciples,” says Folkerts.

“At many institutions, an orientation course like this would focus more on practical matters—the ins-and-outs of registration, major options, teaching study skills,” Folkerts says. “Core 100 brings these two things together. When we walk through the process of registering for classes, we also talk about kingdom work and about what it means that all areas of life are under the lordship of Christ.”

For some students, a focus on the kingdom of God and the narrative continuity of Scripture is utterly new. They may resist it. Or half-understand it. But for many students in Core 100, the seeds are sown for lifelong engagement with the tradition’s central ideas about Scripture, God’s work in history, and the pivotal role played by Christ’s resurrection in God’s plan for redemption.

In several early core courses, students are introduced to a “historical/redemptive” examination of the roots of Western culture in a global context.

Christians recalls being in three of those courses at once.

“Suddenly, everything was coming together. I was beginning to see how connected the whole Bible is, from the Old to the New Testaments, and to understand the narratives of Scripture as something that actually took place in history, in a political world and a certain cultural context. And I began to see more clearly the way that my calling—my story—fit into a much bigger one.”

Like Christians, many students come to college feeling anxious about choosing a major, but by the end of the semester, much of that angst lessens.

“The question isn’t, ‘Should I be a real estate agent, or a teacher, or an engineer?’ It’s bigger than that,” Folkerts says. “It’s, ‘How do I live life—my whole life—as a kingdom servant and child of God?’”

STORY IS THE WAY IN

Rather than focus on abstract terms and concepts—irresistible grace, sphere sovereignty, Christ-centered renewal—Core 100 students are invited to explore the Reformed tradition through story. Story, in Core 100, is central to helping students situate their own lives and callings within the narrative of God’s kingdom and within the plan of redemption God is working out in and through human history. Understanding how their story relates to God’s story puts students in the center of the paradox of the here and not yet here.

While Core 100 students are introduced to some of the key ideas and terms associated with the Reformed tradition, those concepts take human shape in the stories collected in Vivid: Deepening Your Colors, co-written by Dordt Dean of Chapel Aaron Baart and former Dordt Theology Professor Syd Hielema.

In the book’s preface, Baart writes, “The heart of God is revealed through stories, and our own lives are the echoes of the stories we read in Scripture. As we surrender our lives to Jesus these stories intersect and we are ‘made alive together with Christ,’ as Paul says. Or, to use an old English word, we are ‘vivified’—we become vivid, our colors deepen.”

Vivid, a refreshed and updated version of a book written by Hielema in 2003, is separated into three sections: “Identity,” “Kingdom,” and “Calling.” As they make their way through the book, students are challenged to discover what it means to live “in Christ” by asking:

What is God doing in the world?

And how do we, in light of who God says we are, enter into his work?

Baart opens the book’s first chapter with a story about being high—“very high”—and crossing the Canada border with a group of friends who’d been smoking pot. He’d left home on uneasy terms, was floundering a bit, and was trying to figure out what sort of life he wanted to live. From within his spinning, half-conscious mind, Baart recalls looking into the face of a border guard and seeing something unexpected: the face of Jesus.

Just when the reader begins to expect a conventional conversion story, Baart makes it less a story of personal transformation—a “come-to-Jesus moment”—and more about God’s invitation to let go of his own plans for his life and participate in something bigger.

Like the course itself, the text meets students in the middle of their social contexts, their test anxieties, and their uncertainty about the future, and it walks them toward a much bigger vision for their lives than simple doctrinal correctness and upright living.

“Before coming to Dordt, I mostly understood my denomination in terms of its stances on certain issues or by the way it approached certain questions of biblical interpretation,” says new graduate Caeden Tinklenberg, who grew up in the Christian Reformed Church. “Being Reformed was mostly about how we identified ourselves to the outside world or the positions we took on issues like the preservation of saints, or total depravity, or whether we affirmed female pastors or promoted Christian education.”

From Core 100 on, Tinklenberg was challenged to think more broadly about the world God created and the role he was called to play in it.

“During my time at Dordt, my understanding of my faith tradition evolved into something richer. It grew to encompass a mindset and not just a collection of beliefs. At Dordt, I’ve learned that I’m called to be a co-creator with God and to seek redeeming purposes and qualities in everything I do. This understanding gives purpose to everything,” says Tinklenberg.

As the stories in Vivid unfold, students begin to see that a life of Christian discipleship has little to do with their small desires and visions of “the good life.” Instead, God calls us to something bigger and

richer and more exciting than that. Vivid demonstrates how God turns us outward, pushing us beyond narrow self-concern and toward the world in which God is already at work, establishing shalom and restoring creation to the purposes God intended for it.

“Students begin to see that they can live their lives in service to God every day, in everything they do,” he says. “It frees them to pursue something they love.”

Senior Hannah Klos took Core 100 with Dr. Charles Veenstra, emeritus professor of communication who has taught Core 100 every year of its existence, even following his retirement last year.

“I came in as a very close-minded freshman who didn’t have much of a global perspective,” says Klos. “I’d never thought about calling in the way Dr. Veenstra explained it to me. He shared a Buechner quote with us, about how ‘your calling is where your talents meet the world’s greatest needs.’ I’d always seen college as a way to get a good job. But Core 100 taught me to see my life within God’s story, and to recognize that my life is not my own; I’m called to use it in service. It’s just a much more fulfilling, purposeful, and exciting way to view life,” she says.