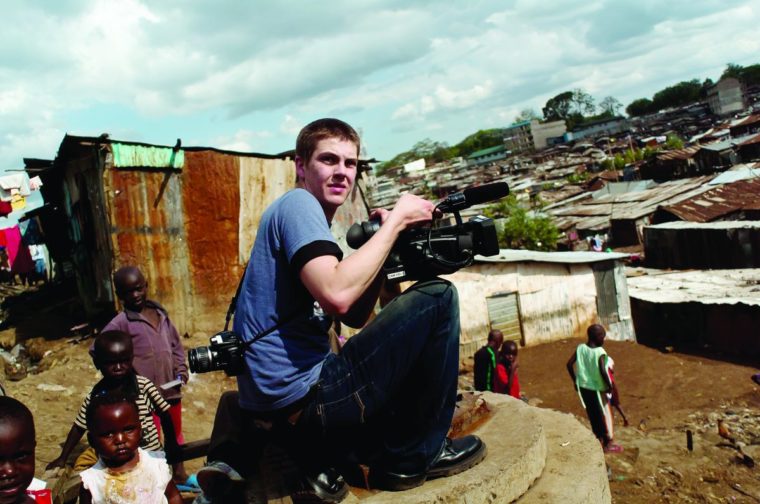 Dale Vande Griend (’10) travels the globe with a camera, filming in places like India, Kenya, and the Philippines.

Upon his return to the states, he goes through hours of footage, carefully piecing together a story about a place—and its people—that might otherwise seem impossibly distant to his North American audience.

Recently, he created a video featuring a volunteer at Tesoros de Dios, a school for students with disabilities in Nicaragua. On another assignment, he documented the story of a temple prostitute in India.

“I think of myself as a bridge between people back home and distant places and stories,” he says. “I bring these stories to people who need to hear them, and who may never be able to travel overseas.”

Vande Griend works for Christian Reformed World Missions (CRWM) in Grand Rapids, but he cut his teeth on international filmmaking at Dordt. As a student in Professor Mark Volkers’s digital media courses, Vande Griend traveled to the Philippines and Kenya. There he shot footage for Volkers’s feature-length documentary, The Fourth World, about slums in the developing world. Vande Griend has been travelling internationally, producing short videos, ever since.

Recently, he’s been exploring the power of visual storytelling. Evenings find him hard at work on his graphic novel, Doll, which tells the story of Roopa, a girl living in India and sold into sex slavery by her father “for two chickens and 1,000 rupees.” He hopes the story will raise awareness about human trafficking and the global sex trade.

As he traveled the world, shooting videos, victims of sex trafficking “kept popping up. Everywhere I went, I was meeting people who’d been involved in, or affected by, trafficking,” he says.

While filming in India, Vande Griend joined a local pastor scouting locations for a new literacy course. They wound up in a North Bihar red light district, where streets were lined with brothels and sex shops. He ended up in a living room with a group of Indian women, listening to their stories of sexual exploitation and abuse.

“Being there, hearing it from them, made me want to do something about it,” he says. But like any complex problem of global proportions, he wasn’t sure where to start. He started reading books and researching organizations who seek justice for victims of trafficking.

The global commercial sex trade exploits vulnerable, often-impoverished people by luring or forcing them into sex work. It is, put simply, “sexual violence as a business,” to borrow a phrase from the International Justice Mission. And business is booming: human trafficking generates about $150 billion a year, and two-thirds of those profits are due to the sex trade. An estimated two million children worldwide are currently victims of sex trafficking.

Sex slavery takes different forms in different parts of the world, says Vande Griend. But it’s everywhere, from the slums of India to the suburbs of Michigan, the state Vande Griend and his wife, Emily (’10), call home.

While Vande Griend was researching the issue, he picked up a couple of graphic novels. The popular genre marries the tone and visual appeal of the comic book with the length and thematic complexity of a novel. The two he read tackled dark and weighty subjects—one about the Holocaust—and he thought the hybrid form might lend itself to telling a story about the global sex trade. That’s when he began sketching plans for his story about Roopa.

“The novel is based on actual stories I’ve heard or read about,” he says. He’s been working on it for two-and-a-half years, posting glimpses into its pages on social media.

It’s painstaking work, and much of the novel still exists in thumbnails. A single page takes days to complete. Sitting in front of an 11”-by-17” piece of paper, he begins sketching in pencil, then moves to brush pen.

“I’ll ink a page in an evening, then I’ll scan those in and color it on the computer, which takes another couple of nights,” he says. Friends and followers read and respond to his serial installments online.

The novel’s pages feature vibrant colors and lush landscapes, but Vande Griend is unflinching in his portrayal of the harsh truths of the sex industry. It’s the same commitment to truth-telling that drives his video work.

“I’ve read novels about girls getting trafficked, and those books always ended the same way: someone would come in and save them. They’d be rescued in some way,” he says. But the girls and women he’s met in his travels who have been able to escape lives of forced prostitution haven’t enjoyed simple happy endings. Instead, victims of sex trafficking, and often their children, live with the stigma of sex work and the pain of deep psychological trauma for the rest of their lives.

Vande Griend wants the story to leave the reader unsettled. There’s no getting around some of the fundamental realities of the sex trade: young girls kept in dark rooms, visited by often-much-older men, and raped, often repeatedly. Still, he’s found ways to treat the graphic, often violent subject matter with sensitivity.

Ultimately, Vande Griend hopes to publish the completed novel, but for now, the images he posts online are raising awareness about the issue.

“Hopefully this story, and these images, can get people to realize that, yes, this is a real thing, it’s happening all over the world, and maybe there’s something I could be doing about it,” he says.