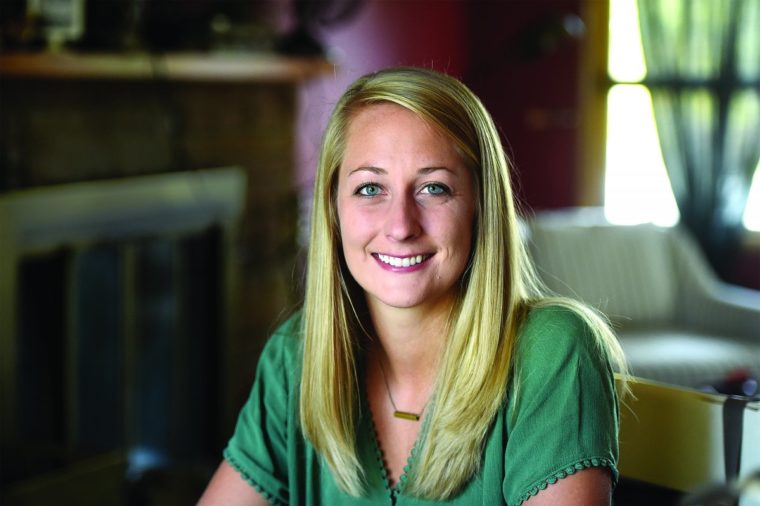 At first, Danielle Roos (’10) thought theatre might be a fun side-gig—a hobby. “Honestly, I was kind of afraid to commit my life to it,” she says.

When she was a student at Dordt, she learned to see theatre through new eyes.

“From the very beginning, my professors were challenging us to think about what stories are important for us to tell,” she says.

Since then, Roos has committed her life to telling those stories. After graduating from Dordt, Roos started her own theatre company, Yellow Rose Productions, in Knoxville, Tennessee. In 2015, a play she co-wrote and directed was accepted into the prestigious New York City Fringe festival, the largest multi-arts festival in North America.

Princess Cut tells the true story of a Knoxville woman who, as a young girl, was a victim of sex trafficking.

“I was introduced to this young woman, and as we became closer, she told me her story,” Roos says. As a five-year-old, the woman was exploited by an older male cousin, her babysitter, who was involved in a sex ring in one of the city’s suburban neighborhoods.

“People often think of sex trafficking as something that happens in far-off places, like Asia, but her story shows it could be happening in the house next door,” she says. The woman wanted to tell her story, so Yellow Rose Productions began working with her to write a play.

“We thought, ‘Knoxville needs to hear this story. We can’t hear this story and not tell it,’” says Roos. She and two co-writers sat down with the woman, often talking late into the night, to piece together a story. Eventually, they were surrounded by Post-it notes with plot points and scene descriptions.

“When we first performed the play, we’d scheduled a one-night show in a little venue downtown,” she says. “We’d set up chairs for about 50, but we had 199 people cram into the space.” Members of the press showed up, and shortly after that, a Knoxville paper ran a large feature about sex trafficking in the area. Interest was so great, they eventually performed the show in cities across the Southeast.

Roos and her team soon began to realize they didn’t really know what trafficking looked like at the local level—and most people in Knoxville probably didn’t either. “We didn’t want people to leave and think, ‘Oh, that’s just a story. It’s fiction.’ We wanted to honor her story by giving people resources to better understand and respond to the issue,” she says. So after each performance, they asked a panel of experts to debrief the audience, including law enforcement officers, an FBI victim specialist, and providers of mental health care and other forms of aftercare for victims.

Roos learned this practice of post-show discussion while a theatre student at Dordt. “It’s a great way to open up a space for dialog about really difficult and challenging subjects. People often leave with more questions than answers, but it starts a conversation,” she says.

“We didn’t intend this to be a Christian play, but the woman we’ve called ‘Sara’ grew up in the church and wanted to address the effectiveness and ineffectiveness of the church in responding to her situation as a victim of sex trafficking,” Roos says. Discussions about sexual purity in her church left her feeling alienated and kept her from seeking help due to feelings of shame. “We wanted to highlight where she was helped by the church and where the church could do better,” Roos says.

As a student, Roos didn’t shy away from difficult subjects. Among other projects, she produced a documentary about domestic violence, and she directed a staged reading of The Laramie Project, about a young gay man, Matthew Shephard, who was murdered in 1998. She has continued to tackle challenging subjects as a playwright and producer, and she says that writing and performing a play like Princess Cut can build empathy among audience members and, ultimately, be a way to seek justice for vulnerable and oppressed people.

“There’s an energy that happens in the theatre—an electricity in the air,” she says. “As an audience member, you’re so close. You’re watching the actors’ faces—you can see every facial tick, the beads of sweat. You become part of the story.”

It’s that opportunity—to make the audience part of the story—that makes the theatre such a powerful place, she says.

“Theatre brings things that are distant near—it helps audience members imagine themselves in another’s shoes. It can move them to care,” she says.