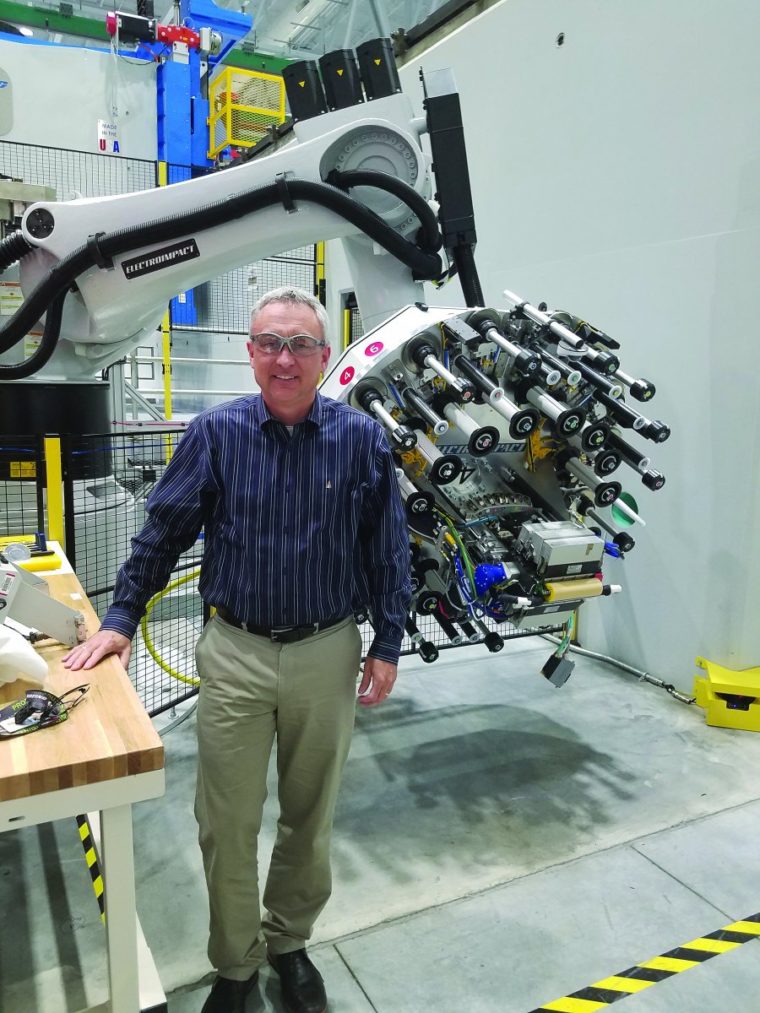 “If, back when I was in high school, I had to write a script for my life, I would’ve said that after Dordt I’d be an engineer somewhere in the Midwest, maybe involved in agriculture since I was a farm kid,” says Mike Vander Wel (’89). “I never would have written back in high school that I’d be living in Seattle, have a beautiful wife and family, have these job experiences and the ability to be in aerospace and travel the world—I never would have written that down.”

Vander Wel, who works as chief engineer in production engineering at The Boeing Company in Seattle, Washington, is the 2017 recipient of the Distinguished Alumni Award. Although his adult life turned out

differently than he imagined as a high school student, Vander Wel knew for certain that he would attend Dordt.

“As a Dutch kid in a Dutch immigrant household in a Christian Reformed church with very Reformed-minded parents, Dordt was a family school,” he says. “By the time I, as the youngest of four, graduated from high school, there wasn’t a lot of debate as to where I was going. It was more of a check that the engineering program was legit.”

Begun by Dr. Charles Adams in 1979, Dordt’s engineering program was less than ten years old when Vander Wel began his freshman year at Dordt. Vander Wel says his Dordt experience prepared him to be competitive in any academic and professional environment in which he found himself—in part because his professors gave a lot of valuable one-on-one attention to engineering students.

“I could go talk to Professor Van Gaalen any time I wanted, and he’d make time for me,” recalls Vander Wel. “So would Professor Adams. I think that’s a big deal.”

“I graduated with eight engineers out of Dordt,” says Vander Wel. “Three months later, I walked into a classroom in Seattle and introduced myself as the T.A. to a class of 120 people. I had an eight-inch stack of papers to grade. They got to see the professor every once in a while, but I was supposed to be the front line for those students. As you can imagine, my four hours of open office time every week didn’t go very far.”

Even though he’d known since his sophomore year at Dordt that he wanted to earn a master’s degree in mechanical engineering, Vander Wel never expected that he would end up on the West Coast for graduate school.

After applying to the program, Vander Wel received a teaching assistantship, which included a monthly stipend and a tuition waiver. Then he met another Christian who became his roommate and a close friend.

“It wasn’t quite like a Gideon moment with the wet fleece, but there were some signposts that I think God put in place that helped me feel comfortable with going to the University of Washington,” he says.

Once finished with his master’s degree in 1991, Mike decided to backpack through Europe.

“I bought a Eurail pass and saw as many countries as I could in three weeks,” recalls Vander Wel.

During that trip, he accrued enough credit card expenses that, when offered a position at The Boeing Company back in Seattle, he decided to take it.

“I didn’t think that I would work there very long,” he says. “I thought I would be back to the Midwest in time.”

Instead, he found opportunities to grow and thrive at Boeing; 26 years later, he sees himself as a “lifer” at the company.

“I tell people that I get out of bed in the morning and speed to work because I can’t wait to be here,” says Vander Wel. “A lot of people can’t say that after 25 years of working.”

Vander Wel’s title is chief engineer for equipment and tool engineering and manufacturing engineering. What exactly does that entail?

The aspect of his job that he most enjoys is influencing and problem-solving matters related to the production system.

“I can affect and influence a broad swath of what goes on in building commercial airplanes technically and from a leadership perspective, which is what my education background has primed me to do,” says Vander Wel.

Looking back, Vander Wel recognizes a few key career moments that helped him reach where he is today. One such experience happened three months after he started working at Boeing.

“There was a guy who told me that I had to take these CAD classes,” says Vander Wel. “I had just finished 25 years of school, and I did not feel like taking classes on my own. But he nagged me until I signed up for them.”

Vander Wel says that, a couple weeks later, Boeing canceled the B2 program, which was where Mike was working. A program manager came to Vander Wel’s department and asked how many people had skills in CAD design.

“I put my hand up with six other people out of twenty,” says Vander Wel. “They told us, ‘Pack up your stuff—congratulations, you’re now on the Triple 7 program,’ which was a major commercial jet program. I went off and did some really cool stuff for the next two years. It gave me a jump start in my career.”

Another key experience for Vander Wel was being chosen out of 30,000 Boeing engineers to enroll in M.I.T.’s Leaders for Manufacturing Fellows Program. There he earned a master’s in business administration and a master’s in civil and environmental engineering.

“That was an amazing experience, too—to get paid to go to M.I.T., one of the premier engineering schools in the world,” says Vander Wel.

In sum, Vander Wel holds four master’s degrees. “I’m looking to trade a couple of these in for a Ph.D., but nobody is biting,” he jokes.

Vander Wel believes Dordt graduates have the ability to succeed professionally and personally through their Dordt education.

“I’ve been in classes in a business environment with almost every educational institution out there, from M.I.T. on down. And the reality is, if you come with the right worldview, hard work ethic, and the right kind of academic training—which is what Dordt provides—then you can hang with anybody.”