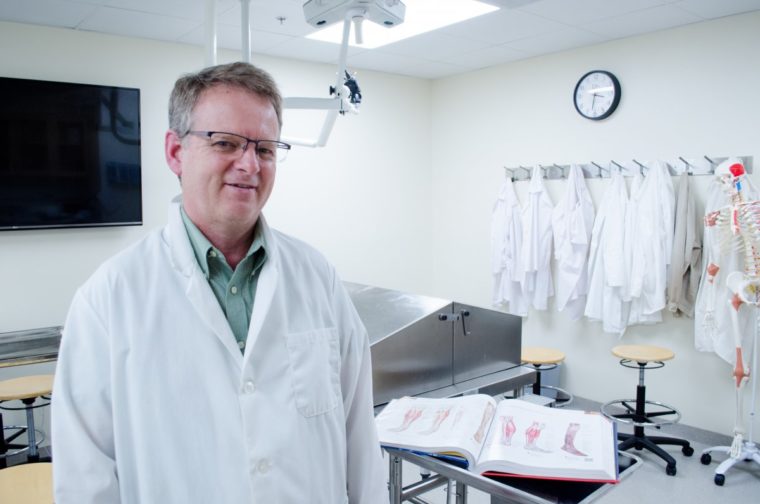 For five days under Jelsma’s direction, the students spent eight hours per day dissecting a male and a female body as part of a weeklong intensive cadaver course.

“At the end of the first day on Monday, we were exhausted,” says Jelsma. “The work is quite detailed, and you realize that this is a human being, which emotionally can be hard.”

All eight students who participated in the cadaver lab had taken Jelsma’s anatomy class, so they were well-versed in human anatomy. However, Jelsma believes having access to a cadaver course and lab will help anatomy students better understand and retain the information they’ve learned.

“In the past, anatomy students have dissected cats; they have had photographic atlases in their textbooks that show pictures of human bodies,” says Jelsma. “But that’s not the same as looking at a human body.”

Julia Bos, a senior biology major who participated in the cadaver course, agrees. “It’s a better way to learn than by looking at a diagram in a textbook,” says Bos. “These are real muscles that you are revealing, for example. It was such a different experience to see it in a real body in 3D. I feel like I can remember it so much better now—the different muscles and their positions.”

Students who plan to attend medical or physical therapy school will especially benefit from taking a course in the cadaver lab.

“Bigger universities typically have cadaver labs, but I don’t know how much access an undergraduate student would have to a cadaver lab at a large university,” says Jelsma. “So when students go on to medical school or physical therapy school, they will have knowledge that will make them that much better prepared.”

The cadaver lab is smaller than a classroom, with room for two dissecting tables and a storage closet.

“We would usually not have more than four students on one body,” says Bos. “Any more than that would get crowded.”

A monitor on the wall, attached to a camera on a moveable arm, allows Jelsma and the students to project muscles, veins, and arteries. The bright surgery lights let students see minute details of the dissection.

“The fascia and the tendons are actually iridescent under the lighting,” says Bos. “It was amazing to see the variety of tissues, how everything looks so differently—and it’s all designed for specific functions.”

The cadaver lab was designed to preserve and respect the bodies.

It will take much longer than forty hours to dissect the two cadavers; the students in the cadaver lab mainly worked on revealing the muscles and opening up the chest cavity. Later this fall, Jelsma’s anatomy course will slowly finish the dissection; students taking non-major human biology courses in the fall and spring will observe the dissected cadavers.

Now that he has access to the new lab, Jelsma is rethinking the way he teaches his courses.

“We usually learn the different organ systems in isolation from each other,” says Jelsma. “However, as you’re dissecting, you have to watch out for this blood vessel or identify this nerve or muscle. You see how tightly held together the person is; everything is integrated. Now I’m planning to teach regionally rather than system by system.”

Dissecting and studying cadavers has reminded Bos of God’s love for his creation. “It shows how much detail God put into designing the human body,” reflects Bos. “It is a picture of his love for us. It is a labor of love to make the body that detailed and well-designed when God could have made our bodies simpler.”

“I’m really grateful to the donors who gave us the funds to complete the Science Building renovations,” says Jelsma. “We were doing good things before, but we can do so many more good things now.”