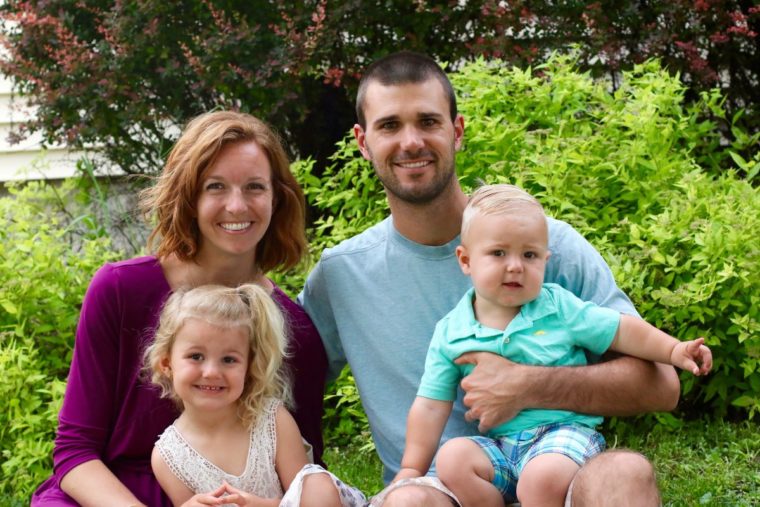 Kendra (Potgeter) Broekhuis (’11) “embodies what it means to be hospitably reformed, and she does so in a way that is open and honest,” says Brandon Huisman, Dordt’s Director of Alumni Relations. Broekhuis is the first Dordt alumna to be given the Alumni Association’s Horizon Award.

“The most significant things I learned at Dordt were not facts or dates as much as they were attitudes and postures,” says Broekhuis. “The professors who gave me personal, valuable training in the field of education taught me that the work I do is an act of worship to our Creator. The people in the community who invited me – a complete stranger – over for meals taught me about living generously. The friends I met taught me that within the Body of Christ, there is home, even when you are 11 hours from your parents.”

Broekhuis was drawn to Dordt because it offered her support both as a volleyball player and as a student. She didn’t have to choose between academics and athletics; she majored in elementary education with endorsements in reading and English as a second language (ESL) while playing competitive volleyball.

“During my junior year in high school, I thought I was going to graduate, forego college, and immediately move overseas as a missionary,” says Broekhuis. After a missions recruiter advised her to “study first” and suggested that becoming a teacher would bring opportunities to work overseas, Broekhuis tentatively declared herself to be an education major.

“I loved the first education courses and practicum hours that I did in an elementary school, and that helped me make my decision to continue majoring in education.”

After graduating in 2011, Broekhuis married her husband, Collin (’09), and one month later they moved to Quetzaltenango, Guatemala, to teach at Inter-American School, a Christian English immersion school.

“Living in Guatemala changed us and challenged our perspective on many things, and I don’t think that’s something you can ever really prepare yourself for,” says Broekhuis. “One of the most significant things we experienced was coming face-to-face with the privileged lives we had been living up until that point. We chose to fly on an airplane and move to a foreign country to work. And when we lived among obvious poverty and injustice in Guatemala, we learned that having the option to choose is wealth in itself.”

This realization made the Broekhuises recognize that their wealth was not meant to be “hoarded in some unattainable quest for the American Dream.” Rather, it must be used to advocate for their

neighbors, especially those in poverty. They were also reminded that their faith in Christ ties them to the community of the global church and that unity transcends differences in nationality.

“For three years we were the ‘strangers,’ but we were graciously welcomed in,” says Broekhuis. “We really gobbled up Guatemalan hospitality. The slower pace of life there was sometimes very infuriating to our timely-minded selves, but it also taught us the beauty of not always rushing to get to the next thing. Offering our full presence to the people in our everyday lives is often a lost art in the United States, but not so in Guatemala.”

While in Guatemala, Broekhuis began a blog to stay in touch with family. “After two years of teaching first grade, I decided to stay home with our daughter, and I used her nap time not to shower or to cook or clean our apartment, but to write. I fell in love with writing. I was able to articulate better than when I speak and put my endless thoughts into clear words,” says Broekhuis. “It has become like therapy for whatever ups and downs we are going through in life. Our six-year marriage has been filled with a lot of change, a lot of heartache, and a lot of joy, and writing has helped me process it all.”

Broekhuis was prompted to write Here Goes Nothing (2017) because she wanted to apply what she and her husband had learned in Guatemala to their lives when they moved back to the United States. In the book, she seeks to recognize the ways God says “I love you” in the everyday moments as well as how he prompts us to share that love with the people in our lives.

“The book captures tensions I feel day to day—for example, finding value in my work as a stay-at-home mom, yet knowing that if we are Christ followers we will love people outside our own walls too,” says Broekhuis. “There is also tension between feeling jaded by various aspects of the American church when we moved back from Guatemala, yet knowing that shunning the Body of Christ was not the answer. And there is tension between knowing God loves me enough to let me rest, yet he also stretches me in uncomfortable ways on behalf of other people.”

Just as Broekhuis tried to apply her gifts of organization, hospitality, and encouragement in her Guatemalan community, she is now doing so in her new community in Milwaukee, Wisconsin.

“There is a lot of brokenness—poverty, broken families, loss—and while I can’t fix all of the brokenness, I enjoy using hospitality and encouragement to walk alongside people in their pain,” says Broekhuis. “I hope I can be an advocate for people like our neighbors. And I hope that as I share my own faith journey, other people will realize they are not alone in their emotional and spiritual battles or daily grind.”

“I hope that we can live a long time in our new neighborhood, and that we may become an established presence of Christ as we fully invest ourselves here. I hope on behalf of our neighbors—who are fighting what feels like the losing battle of poverty—that God’s kingdom will come in powerful ways even before Christ returns,” says Broekhuis. “I hope that my children will learn to love Christ, and that his love in their hearts will pour over for even the people who are most different from them. I hope that Collin and I will continue to genuinely enjoy being married to each other. I hope that I will continue to have the opportunity to write, and, if not, that I will find contentment in whatever work God has prepared for me to do. I hope that one day I will meet Jesus and our baby girl who died. And I hope that in everything we do—whether it’s working or resting, eating or praying, going out or staying in—that Christ’s name will be glorified.”