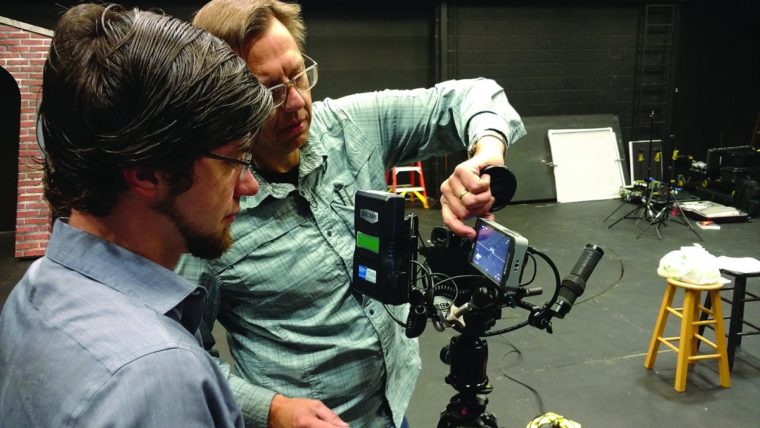 LUKE SEERVELD (’85) SAYS HE’S USUALLY THE “OLD GUY” ON THE SET THESE DAYS-BUT PRODUCERS KEEP ASKING FOR HIS SERVICES.

Thirty years as a gaffer and the wealth of expertise he’s gained keep him busy lighting film and video shoots in and around Silicon Valley and the San Francisco Bay area. In fact, people around the world have benefitted from his expertise through the more than 40 posts on his YouTube video blog, “Meet the Gaffer.”

“I’m just a small outfit,” he says, but the list of people he’s made look good by the way he lights them ranges from Apple CEO Tim Cook to Basketball player Stephen Curry to House Minority Leader Nancy Pelosi to pop star Lady Gaga. Lighting setups for companies like Google, Netflix, Apple, Microsoft, Oracle, NFL films, and many others make up a photo record that helps him recall how he solved specific problems, provide a teaching tool for lighting seminars, and remind him how to bill his clients.

Seerveld notes with irony that he usually enters buildings from the back, through a loading dock or service entrance, but then ends up going to the CEO’s office to set up for an interview.

“It’s a sort of blue-collar-meets-white-collar experience and a perspective I always enjoy,” he says.

As he flips through some of the photos that document the jobs he’s done, Seerveld uses words like “rigging” and “C stand,” “key light, scratch light, fill light,” “hard light and soft wrap.” Over the years, as he’s built up his expertise, he’s also built up his collection of gear, moving from a van to a two-ton truck to carry his equipment from job to job and regularly upgrading his equipment to keep up with the dramatic and rapid changes in lighting technology. The evolution of digital and LED technology means being a gaffer is dramatically different from what it was when he started as a recent Dordt graduate, but that also keeps it interesting. One thing has remained constant, though—his faith continues to shape the way he sees the world and does his work.

“Lighting can be done from a Christian perspective,” he says. A philosophy major and film buff in college, he learned the nuts and bolts of his profession through experience, but his education gave him the tools to think and learn and relate. He likes to use a cardboard frame to help show how he—and everyone—frames the stories they are telling, whether the message is verbal or visual. At workshops, he hands each participant a piece of poster board and has them cut a hole to make a small frame.

“You choose which frame to use—not only what you put in but also what you leave out,” Seerveld says. He gets involved in the whole process of a video shoot, interacting with his clients and trying to make sure that the way he lights the shoot fits the producers goal and the integrity of the people involved.

“The face is important,” he says. “How you light a face tells the story on an emotional level.” It also shows respect for the person being filmed and for the producer’s intentions.

It takes much more than a good camera to tell a story. A close look at ads or films on your screen gives some clues, but comparing a final product with photos of the setup used to shoot a scene might surprise you. The lighting possibilities are many and involve problem-solving skills and creative thinking. Some assignments give a gaffer plenty of time to plan. Some demand quick action following minimal pre-planning. A major corporate announcement builds in time to carefully think through and work with a company on the kind of impact they want to make. A quick, live announcement by a politician doesn’t. And lighting experts learn what techniques soften the effects of an aging chin when shooting an older person or how to effectively light a person who shows up with thick, reflective glasses.

In the black-and-white video world of a generation ago, camera lenses were not only less sharp, but camera people often wanted a softer look—sometimes even putting a nylon stocking behind the lens. Things are very different today.

“With 4K or even regular HD, you see everything,” says Seerveld. And he means everything. Working with the director of photography and the make-up artist, an experienced gaffer can help the viewer focus on the intended story—not an unintended distraction.

After graduating from Dordt in 1985, Seerveld moved to Minneapolis/St. Paul to attend Film in the Cities, a small two-year program. Based on his work on a few professional shoots landed through a family friend, he was exempted from the first year and ended up leaving before he actually completed the program. But it was enough to launch him into his life’s work. A family friend from California doing a shoot in Minneapolis hired him as an assistant camera person. They liked his work and took him on other assignments. At a local video production company, he became the “fix-it guy,” a grip, an electrician—whatever was needed.

“It was a great experience,” Seerveld recalls, so much so that he decided to load his few belongings in his pickup and head for San Francisco where he had a couple of contacts. He “did some free stuff”—assisting producers, helping electricians, working as a Grip. He traveled between San Francisco and Los Angeles working on some low budget films, a miniseries, joining the IATSE union, and learning the ropes for a couple of years. Marriage and a daughter changed his focus. He bought his own gear and began to take on corporate work, not sorry to give up the life that went along with the longer form work.

He still likes the work—the challenge of finding the right solution to a lighting problem; the unpredictability of a shoot and of what job will come next; the relationships with camera people, other gaffers, producers, sound technicians. Freelance work comes mostly through word-of-mouth contacts, but it always seems to be there.

“It’s about who you know and what you know,” he says. “Your reputation is as good as your last job. Your word is your bond.”

And he likes the people he works with. Freelancers join together as needed for the demands and size of the job.

“There’s a lot of trust among people in the field,” he says. He may get a call from a producer scheduling a job two weeks later. “There’s no contract. You agree, you show up, you send an invoice. The money almost always comes in—although TV networks and nonprofits sometimes take a long time to pay,” he adds wryly.

“There’s often a tension between the creative desires of the camera person and the financial constraints of the producer,” he says. Experience helps—and Seerveld’s easy-going friendliness. He can suggest alternatives based on what he’s learned on other jobs, and he jokes that he often “produces from below,” helping come up with lighting options that the mostly younger crews or the producer may not have thought about. His contributions and varied experience beyond lighting, as a line-producer and as an audio recordist, continue to make him a valuable team member.

Would he do it again? Absolutely. He’d even tell students interested in the field not to worry too much about specific training.

“You learn as you go,” Seerveld says. “What’s important is having something to say and a way to say it. A liberal arts education gives the best preparation. It also helps you keep life in perspective.”

“I’ve worn a lot of hats,” he says. He’s also gotten to know many different people, enjoyed the self-starting and flexible nature of his work, realized his love for building things (but not too permanently), and become a thoughtful citizen, husband, father, church member, and friend in the process.

Thinking about his original goal of becoming a documentary producer, Seerveld says, “What I thought wasn’t my ideal of a wonderful life has actually turned out to be a very wonderful life.”