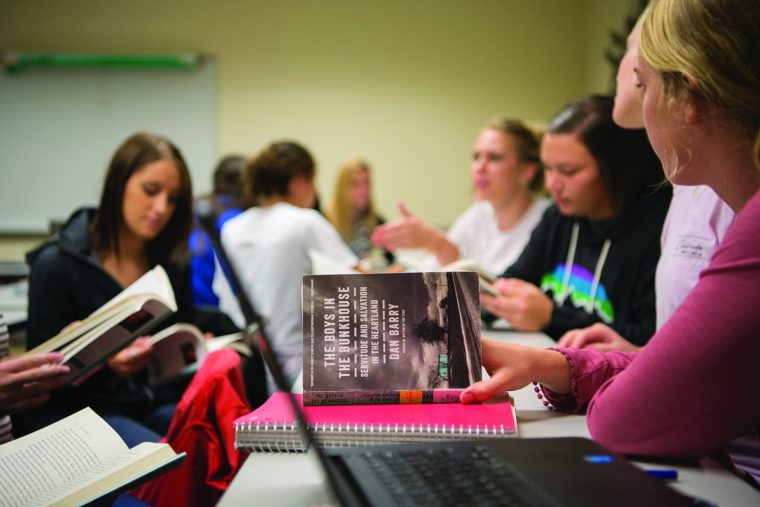 BRINGS DORDT AND SIOUX COUNTY TOGETHER

The Hulst Library at Dordt College has joined ten public and academic Sioux County libraries in a reading program called “One Book, One Sioux County.”

“The point of the community reading program is for students to dialogue with people they may not have conversed with otherwise,” says Jennifer Breems, director of library services at Dordt’s Hulst Library. Breems sees the program as an opportunity to bring guests speakers and authors to the area as well as a way for public and academic libraries in Sioux County to work together.

“We had seen other counties do it with great success, and we thought Sioux County could support it as well,” says Becky Bilby, director of the Sioux Center Public Library.

The program, now in its second year, is essentially a community book club. The academic libraries at Dordt, Northwestern, and Northwest Iowa Community College take turns hosting a program related to the book. Last year, residents and students read Ordinary Grace by New York Times bestselling author William Kent Krueger; Krueger came to Northwestern to speak about his work. This year, the program highlights Boys in the Bunkhouse by Dan Barry. The book tells the true story of a group of men in Atalissa, Iowa, who were exploited because of their intellectual disabilities, and the efforts of those who worked to help them reclaim their lives.

At least one Dordt professor is also taking advantage of the program in her classroom. Dr. Kathleen VanTol, associate professor of education, is excited that this year’s book relates so closely to the field of special education. “One of the objectives for my course is for students to understand the historical foundations, major legislation, and current issues in special education. This book really supports those objectives,” says VanTol.

Student, staff, and community readers had the opportunity to come together on Dordt’s campus on Tuesday, October 17 for a screening of the “Men of Atalissa” documentary and on Thursday, November 9 in the B.J. Haan Auditorium for a panel discussion on the book.

“Dordt students spend most of their time on campus—they aren’t necessarily as connected to Sioux Center as a town. To have the same book read at the public library and at Dordt breaks down the barrier between the college and the town,” says Breems.

“I think this is a great way for Dordt to promote and be involved in community events and activities,” adds VanTol.