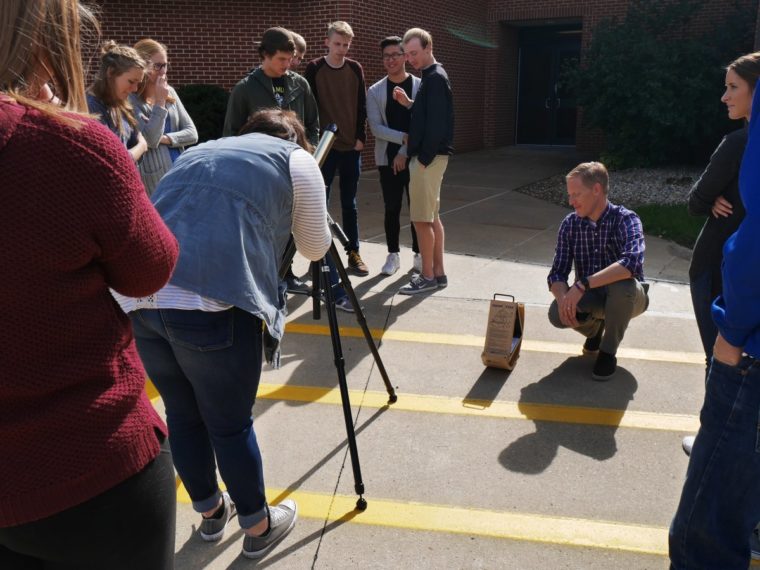 To see this summer’s solar eclipse, Dordt senior Ashley Huizinga drove through the night from her home in Grand Rapids, Michigan, to Dordt’s campus on Monday, August 21.

She picked up some Dordt friends and continued on toward York, Nebraska, a town in the path of totality. On the interstate heading into Nebraska, flashing signs read, “Turn your headlights on during the eclipse.” Her friends used apps to keep track of the eclipse’s movement. By the time they reached the Utica, Nebraska, exit they had about fifteen minutes before the eclipse was supposed to peak.

“We took off through the cornfields down dirt roads,” remembers Huizinga. “My car was not thankful, but it was worth it because we got out to the middle of the cornfields just at the point of totality.”

As they took off their eclipse glasses and looked around, “everything faded to dusk,” says Huizinga. “The bugs started chirping, and the birds stopped singing. When the eclipse was over, I thought, ‘Did that really just happen?’”

Huizinga’s efforts to get into the path of totality were a direct result of taking Dr. Channon Visscher’s astronomy course.

“I really wanted to see the totality of the solar eclipse because that class taught me that it was a once-in-a-lifetime experience,” says Huizinga.

About 100 miles away from Utica, Visscher (’00) and his family stopped at a state park in Loup City, Nebraska. As the Visschers set up their folding chairs, they were greeted by eclipse watchers from all over the United States. They met people from Texas, Minnesota, and Wisconsin—including a small group from the Omaha astronomical society.

“This was my first total eclipse,” says Visscher. “I’ve seen a lot of partial eclipses, and the partials are amazing and cool, but that moment of totality is just—there’s nothing like it.”

How does a planetary science expert describe what it was like to see a total solar eclipse?

“During the totality, the moon is a sharp black disc, and you can see the corona,” says Visscher. “You can see a few stars. You can very easily see Venus, and Mercury is a little closer to the sun. The sky looks like a 360-degree sunrise or sunset because every direction has a pinkish, reddish hue, since there’s still sunlight shining elsewhere. As you look up to the sun the sky gets darker because the sunlight is being blocked out directly above you. The way I’ve been describing it to people is that it felt a bit like looking behind the curtain.”

Seeing the total solar eclipse was a moving experience for Visscher, but sharing it with his family and other eclipse watchers in that park in Loup City made it even better.

“One of the really cool things about the eclipse is that it’s best enjoyed in groups,” says Visscher. “That park—there was a sense that we were sharing this together. We formed friendships with a couple from Texas and a group from Omaha, because we’re sharing and participating in this event together. That’s far more edifying than seeing it alone.”

THE SCIENCE OF PAYING ATTENTION

In Visscher’s solar system astronomy course, Dordt students get that same sense of sharing and participating as they learn about planets, stars, and galaxies together.

“There’s something about the night sky that is such a shared thing,” says Visscher. “The same sky is above all of us. It’s a really great thing to experience together as a community.”

Visscher and his astronomy students spend Monday nights looking at the night sky. Sometimes they end up in the Dordt prairie, each student using binoculars to get a closer look at constellations, planets, or star clusters. They jot down notes in their workbooks as they look up.

Huizinga, who took Visscher’s astronomy course last fall, recalls how much fun it was to participate in those labs.

“In Grand Rapids, you don’t see a lot of stars because of the city lights,” she says. “At Dordt, when you walk into the middle of the prairie, there’s nothing to block them.”

“A big part of science is paying attention,” says Visscher. “How do you teach someone to pay attention? I think astronomy has an advantage in that it is so captivating. I don’t have to convince people that galaxies, stars, and black holes are interesting.”

Visscher wants his students to pay attention not only to spectacular events like a total solar eclipse but also to slightly less spectacular sunrises or distant stars.

“That eclipse was one of the most incredible things I’ve ever experienced in my life,” says Visscher. “But I don’t see it as any more beautiful than the clouds at sunset that I saw later that evening. One of my goals in my astronomy class is not only to give God credit for the most spectacular but also to recognize that everything is spectacular once you start looking.”

Marta Vander Top, a 2017 Dordt graduate who took Visscher’s class in the fall of 2016, recalls how the astronomy course helped her put things in perspective.

“We wrestled with the tension that there’s this God of the universe who knows everyone and everything on this planet, and he also knows things the human race doesn’t even understand,” she says. “And, he knows every hair on my head. It really helped me to see that the world is not all about me, that there is so much more than me, but still God cares about me.”

This fall, the twenty students in Visscher’s astronomy course are just as varied as the eclipse gatherers in the Loup City park, hailing from states like Missouri and Michigan and from countries like Canada and Indonesia. All the students except for one are juniors and seniors, and their majors span from elementary education to political science to accounting.

During the second week of class, Visscher stands at the front of the classroom holding what looks like a large glass ball. On the outside blue lines mark the constellations; on the inside, a medium-sized model represents the earth and a tiny yellow ball the sun.

“This is a model of a celestial sphere,” says Visscher. “It’s great, but it’s also horribly wrong—the wrong conception to have of the cosmos. It essentially treats the sky as if it were a fixed two-dimensional glass sphere around us with stars on its surface.”

Visscher walks closer to the students’ tables, pointing out that the model of the celestial sphere is helpful because it assigns positions to distant stars. He shows where the north celestial pole and the south celestial pole are located.

Visscher’s teaching style is intended to help students think about topics beyond the northern celestial pole and the fact that the earth’s axis is at 23.5 degrees.

“I’ll ask a lot of questions,” says Visscher. “Many great questions have counterintuitive answers until you really think about the movement of the stars or the sun. We all walk around knowing that the earth is rotating, but we intuitively treat the sun as moving around us.”

The engaging questions that Visscher poses make his students consider why they think the way they do. That reflective, intentional teaching style sticks with his students, even after they have graduated.

Vander Top appreciated how much Visscher cared for his students and the subject of astronomy.

“Visscher is so good at that type of community building—at making his examples relatable to everybody,” says Vander Top. “He is the perfect combination of being passionate about his subject and about his students. What he wanted at the end of the day was for us to get a little of the passion he has for astronomy.”

As Visscher sets the model of the celestial sphere on the table, the conversation shifts to the stars that can or can’t be seen in the northern hemisphere. He talks about how the Big Dipper and Polaris will always be visible to those in Northwest Iowa, whereas the Southern Cross is always below the horizon.

A student puts his hand in the air. “During the eclipse in August, did you see other constellations than you’d usually see at night?”

“I think the basic question you’re asking here is, ‘What determines whether or not I can actually see a constellation?’” says Visscher. “And you’re also probably thinking, ‘That’s totally not my question, but sure, go ahead and rephrase it in a way that you can use the slide you prepared ahead of time.’”

The student smiles, and a few others laugh.

“There are two main factors,” says Visscher. “First, where are we on the earth? I can’t see a constellation in the northern hemisphere if I’m down in the South Pole. It depends on your latitude, not your longitude. If I’m at a different longitude, all I have to do is wait for night. And second, which constellations are visible depends on what time of year it is. Right now, I would have a hard time seeing Virgo and Leo because they’re behind the sun. Six months from now, no problem.”

The students nod, some jotting notes down into notebooks.

It is evident that Visscher wants his students to see the practical as well as the theoretical nature of studying astronomy. “Visscher is really invested,” Huizinga says. “That made the course that much better—he is so enthusiastic about it all.”

Visscher has always been interested in science and space.

“As a kid, I paid close attention to the space program,” he says. He remembers the Challenger disaster on January 28, 1986, how he stayed home sick from school that day so he could watch the television coverage.

“In 1990 when my family was on vacation, I picked up this magazine somewhere about when Voyager first arrived on Neptune.” He still has the magazine on his bookshelf in his office; he pulls it down to page through it.

“This was the first time I saw Neptune up close,” he says, pointing to a picture of the deep blue orb. “Before we just saw a pale blue dot, and now we’re seeing the planet—its moon, the rings. The Voyager mission certainly spurred on my love of space.”

As a chemistry major at Dordt, Visscher says he took any astronomy course he could. He chose to study earth and planetary sciences at Washington University in St. Louis because they had research projects focused on chemistry within their planetary science program. After graduating with a Ph.D. in 2006, he worked in Houston at the Lunar and Planetary Institute and then at the Southwest Research Institute in Boulder, Colorado, before returning to Dordt to teach in 2013.

“We’re all born with curiosity. I try to approach astronomy with humility, knowing that there’s so much we don’t know,” he says.

He also loves uncovering and exploring things—which he says is important in astronomical sciences. That curiosity and humility motivates Visscher to chase eclipses and make learning in community engaging for his astronomy students.

“Astronomy is a blast to teach,” says Visscher. “I’ve been thinking about some of these questions for a long time, and I don’t think I’ll ever say, ‘Now I know.’ We’re stretched every time we encounter something bigger than ourselves. It’s exciting to be part of that with students.”