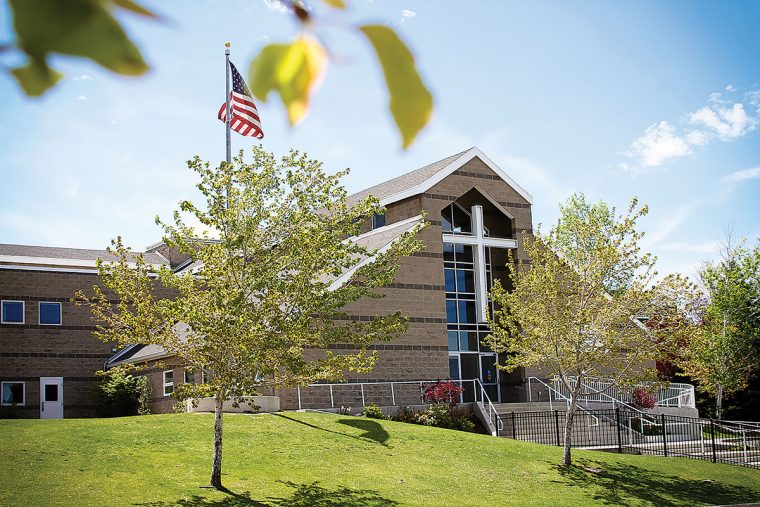 Mitch Menning (‘96) grew up in Edgerton, Minnesota and went to Southwest Christian High School, where, he says, 18 of the 42 graduating seniors—his classmates—drove south down Highway 75 to Sioux Center and Dordt College. He wanted no part of the herd—wanted almost anything else.

That’s why he went to Michigan, to Calvin College.

Where he lasted for one semester.

It wasn’t soybeans that brought him back, or sweet farmland aromas; it was Michael, his brother, a kid with special needs. He just missed his brother. If you understand that about Mitch Menning, you’re on the road to understanding him.

He was, back then, as he remains today, determinedly and joyfully devout. When he told Ron Rynders (’67), his Dordt adviser, that someday he wanted to teach Bible, Rynders told him he’d need some other major because Dordt offered no “Bible teacher” major. Every class was biblically based, Rynders said, a line Menning claims to have heard more often during the next four years.

Still, it seemed wrong that a Bible teacher would have no training in Bible teaching, so he walked into the theology department and asked them the same question. The theology department back then was a formidable bunch—Profs. Mike Williams, Mike Goheen, John Vander Stelt, and Wayne Kobes (’69). The four of them pressed him to get a theology major, which he did—and for which he’s greatly thankful, even though he hasn’t “taught Bible” for years.

Make no mistake: Even though he once wanted no part of it, his Dordt education has played a starring role in his life. He met his wife, Kara (Van Heyst, ’97) at the fall Okoboji retreat, which he and his really tight roomies—Ted Kamp (’95), Kendal Walhof (’95), Garry Eriks (’95), Kevin Vos (’96), and Kirk Vander Pol (’95)—made sure to attend because, he says, they wanted to not only be living group leaders but also to get a good close look at the new freshmen “women.” He and Kara met there, but they didn’t date until after a PLIA trip to Jackson, Mississippi, where Mitch led devotions and Kara, he claims, was the only one who agreed with what he was saying. After PLIA, things got serious; both Kara and Mitch committed to Christian community development—and each other.

There’s more. His last year at Dordt, Mitch pulled a student teaching assignment on the west side of Chicago to be closer to Kara, who’d transferred to Trinity to get a nursing degree (before Dordt had a program). When they graduated, a good job offer meant they could stay in Chicago.

But they didn’t. Mitch had interned earlier for a couple of Dordt grads, Stan (’81) and Alice (Veluw, ’80) Weber, in an inner-city ministry in Nashville, Tennessee. When the opportunity arose to move to Nashville, the Mennings took it. Mitch started his teaching career at Christ Presbyterian Academy, where he coached soccer (“they took me along to drive the bus”) and taught, mostly math.

Math, you say? He claims he tells this story monthly at least. A couple of years before, when he was a student of Dr. Calvin Jongsma in a math education class, he’d handed in an assignment, a lesson plan. Jongsma thought it was great, then handed it back. “Now do the same lesson plan as if you were teaching in a public school but still from a Christian perspective,” said Jongsma. That moment, that comment, he claims, taught him something fundamental about Christian education.

In 2000, Kara finished a master’s in nursing at Vanderbilt University, and Mitch started to wonder about raising a family on the salary he was taking home as a high school teacher. He loved teaching, loved math, but when the opportunity came to move back to Kara’s hometown of Salt Lake City, they took it. Mitch thought he’d leave the classroom and take up accounting. He began working for Byron DeStigter (’87), a CPA married to Vonda (Broek, ’88) DeStigter, whose coaching class Mitch had taken while he was at Dordt.

This may be starting to feel like Dordt Bingo, but there’s only one more. Or two.

After a few years in Utah, Mitch and Kara had four kids—three biological and one adopted—and were vitally interested in one more adoption. As a couple with significant social concerns, they were very aware of the 160 million orphans in the world.

One afternoon, Kara found the picture of a little girl on the website of organization in Ohio. “I really don’t know where she is,” Kara told Mitch when she called to tell him that this particular face really caught her eye. “I think she’s in Barbados—I’m putting some things together.” It was the Fourth of July 2011.

The organization told them the child they’d spotted was Haitian, and the care center she where she lived, should they want to proceed, was “Children of the Promise.”

The Mennings keep in touch with their old roomies, including Mitch’s long-time buddy Kirk Vander Pol (they were baptized together and made profession of faith together—same church, same Sunday!). So Mitch texted Kirk, who lived in Prinsburg, to see if he knew anything about “Children of a Promise.”

“Well, yeah,” Kirk said, dumbfounded. Not only that, but he and his wife Christina (Breems, ’95) had just returned from a trip to Haiti and were thinking of moving back there. “Why are you asking?”

“Kara was looking online and there’s this little girl named Natalie,” Mitch told his old friend. “We’re feeling like we’re being called to adopt her.”

“Get Kara on the phone,” Kirk said.

“Why? You know something?”

“Yeah, we know her,” Kirk told them. Then, profound silence. “That’s the little girl we are thinking of adopting,” Kirk said.

“Oh, there are more kids,” Kirk said. “Maybe we both should adopt from there?” The lifelong friends decided to proceed with the adoption process, and COTP eventually asked the Mennings to adopt two children.

Mitch and Kara gave it some thought—some, and then said yes.

For the record, Kirk and Christina Vander Pol did move for a time to Haiti. While all the paperwork for the Menning adoptions was accomplished, the Vander Pols kept an eye on a brother and sister, Cyndi-Love and Lou, who, in 2013, became residents of Salt Lake City, name of Menning.

Today, Mitch likes to describe these two as part of Intermountain Christian School’s classes of 2027 and 2029, where he is now Head of School.

The years Mitch spent in finance and accounting were good years; but up there in his office pod, he couldn’t stop looking across the street toward a building that enrolled all of his beloved kids. He couldn’t stop sneaking peeks, couldn’t stop thinking about that school, a Christian school, about its focus, its spirit, its energy.

He says he never held any designs to return to the classroom and certainly didn’t seek a job across the street from his accounting office. Quite simply, he loved his work tending books. But it happened. He moved across the street, eventually, and became part of the staff of Intermountain Christian School (ICS).

There’s still one more Dordt story that must be told.

As Head of School, Mitch Menning was naturally concerned about what was happening in the classrooms. To get some perspective on the difference between what he was seeing and what he was dreaming for ICS, he attended a gathering of Christian school administrators where he met two consultants from North Carolina, who offered to come to Salt Lake City and give some advice from their storehouse of experience.

The consultants came twice. They called Mitch a week after the visit. “Hey, listen,” one of them said, “We’ve got an idea here. You ever hear of a place called Dordt College?”

Mitch claims his diploma was standing up so high on the book case they hadn’t seen it. Yes, of course, he’d heard of Dordt College, he told them. And then, “I’m a grad.”

These consultants, a couple of Southern Baptists, told Mitch that he should really touch base with a guy named Tim Van Soelen (’90), who teaches there, because Van Soelen helping start an organization called the Center for the Advancement of Christian Education (CACE). “That’s who you need to call,” those consultants said. “You need to get them there.”

What did he learn? A lot, he says. It was a great experience.

The ICS mission statement is scribbled at the top of the white board in the office of the Head of School. That statement is a rephrasing of what he’d learned long ago from a host of profs at the college he once wanted no part of.

“ICS is a Christ-centered learning community that equips and    inspires students to thrive in God’s world.”

It’s heady stuff and a real challenge to live through, he says; but it’s not at all unfamiliar territory.