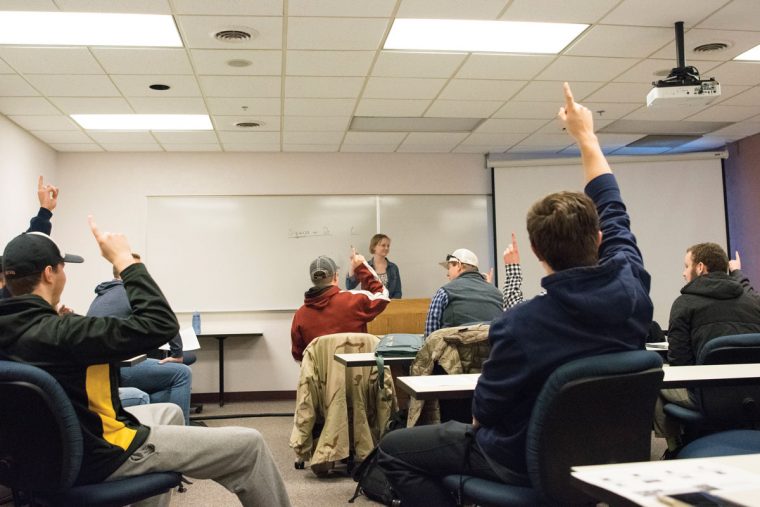 “Did you hear what happened? The president was assassinated between classes!”

In the back of the room, two students whisper shadily together. Asked what they’re talking about, one responds in a hushed tone, “I’m going to take over the government,” and glances around to make sure no one is listening. “Military action. Shhh.”

The class is called to order. A student steps to the podium, gavel in hand. “A lot of bad things have happened since my presidency ended,” she begins. “Pancho Villa escaped, and there was another assassination…”

“That happened before I escaped,” Pancho Villa interjects sullenly, slouching down in his chair. “I had nothing to do with it.”

With a sharp motion for him to be silent, the president continues. “We are here to consider the petition allowing women to run for presidency. Votes in favor?” Hands begin to rise.

Suddenly the peaceful meeting is interrupted by a loud voice from the back of the room. Pascual Orozco strides to the front of the class. “I’m taking over the government by force!” The now-former president protests, but is quickly silenced. “And the new Secretary of War shall be…” continues Orozco, “…Pancho Villa!”

Pancho Villa lets out a loud whoop. “We’re goin’ to war with America!”

It’s obvious: this is no ordinary history class. It is a simulation from Reacting to the Past, a series of elaborate games designed to immerse students in a specific historical event. A variety of simulation units are used in Dordt history classes: the French Revolution, the 1787 Constitutional Convention, and Henry VIII, among others.

In each simulation, students are given specific persons, situations, and conditions to enact. They read original sources to understand how to accomplish their character’s goals, and students must stay in character—even when it goes against their own personality. Their grade is based on how well they achieve their objectives, how they participate in debates, how much effort they put in, and how well written their assignments are.

“Dordt’s Task and Framework talk about the importance of Christian perspective,” says Dr. Paul Fessler, one of Dordt’s history professors. “Students hear these words often, but don’t understand how it comes into practice. When you give them a different historical perspective to embody—using the same texts, but arguing different things from it—everything becomes clearer. They realize, oh, this is what ‘worldview’ means. It gives them a greater understanding of different perspectives without shaking their own.”

For Fessler, even though they are only one of many teaching styles to use, simulations help students discern the spirits of the age and see how concepts, policies, and actions emerge from different worldviews.

They also teach students to develop empathy in their own lives.

“Students are fully immersed in the time period,” says Culpepper. “They feel what it’s like to be this real person in history, who is very different from themselves. This understanding goes beyond the classroom, which is really magical.”

Reacting to the Past simulations are only one of the things that make Dordt’s history department remarkable. The history department is known for the strong community they develop with their students. In addition to two annual get-togethers, faculty members host students for events like movie nights, game nights, and even a cookout that simulates colonial cuisine.

Each semester on the first night of finals, the history department hosts what has become known as “Quarter Dog Night.” They set up around 9 p.m. in the Campus Center and sell hot dogs and root beer for only a quarter. Students get a break and some food to power through their studies, and the history faculty get to connect with the campus community. Often the professors’ entire families come to serve hot dogs.

“I really appreciate how engaged with students the history faculty are,” says junior Jonathan Beltman. “They are really willing to put themselves out there. They show you why history is so important and how to use lessons from the past to tackle current issues.”

“I’m continually amazed, in each class I take,” adds Anna Bierma, a senior. “They’re so knowledgeable. Ask them any question, and they’ll know the answer. And they work in a cross-disciplinary way; they see our goals and shape what they’re teaching to our needs.”

Students remember this deep investment years after graduation. “My history professors were probably one of my favorite parts of Dordt,” says alumna Maria TeKolste (’16). “They were amazing teachers. I still keep in touch with all of them.”

President Erik Hoekstra has dinner with every freshman student at Dordt, and he always asks them about their favorite class. “Over the years, the core history courses come up with inordinate frequency—and it doesn’t seem to matter which professor the student had,” says Hoekstra. “These are core classes that students at most colleges think of as ‘ugh’ classes, but at Dordt, they’re favorites. It’s a credit to the history faculty’s commitment to excellence in teaching and their team approach to their work.”

Fessler is the most longstanding member of the department, arriving at Dordt in 2002. Fessler’s smile is mischievous, his hilarity contagious. He received his master’s and Ph.D. from Texas A & M University.

“I wanted to teach somewhere that had a purpose, a mission, somewhere that would make a difference,” he says. “I was previously at a college that called itself Christian, but didn’t have an integrated Christian perspective at its core. When I read Dordt’s foundational documents, I saw a holistic approach—where history was tied to all other areas and the curriculum was held together by a common framework. It was the kind of Christian education I was looking for, helping students grow and gain the wisdom that comes from the fear of God.”

The other three faculty members were hired in 2012. All shared a deep excitement about the mission and vision of the college and, in particular, about the core program.

For Cosgrove, Dordt’s core program was reminiscent of his Jesuit education at St. Louis University, where he earned his Ph.D. Cosgrove dresses professorially in vests and scarves and, as a medieval expert, adorns his office with reproductions of exquisite works of sacred art.

“Jesuits have a strong emphasis on liberal arts and believe that all students should be taught in an integrated, cross-disciplinary way. Protestants aren’t always good at that,” says Cosgrove. “But Dordt is different. Dordt’s Task and Framework are very intentional in setting up what education should look like.”

Culpepper was also drawn to Dordt because of the cross-disciplinary focus of the core classes. With degrees in history and theology from both seminaries and universities, Culpepper was uniquely positioned to teach in the core program. Before earning his Ph.D. at Baylor University, he was also a pastor in Louisiana and Mississippi. His areas of interest include early modern European history and U.S. religion and popular culture.

Warm and welcoming, Culpepper bedecks his office with paraphernalia from a wide variety of fandoms: Marvel, Doctor Who, Star Wars, and more.

“I love teaching the core classes because I get to interact with students from other disciplines,” says Culpepper. “It’s exciting to me that we’re training not only history teachers, but people who may go into government or law or other fields.”

McCarthy has a delightful, dry sense of humor. After completing a master’s in Russian literature and a Ph.D. in European history from the University of Notre Dame, he taught for eight years at Montreat College in North Carolina.

For McCarthy, one of the chief draws of Dordt was the shared Reformed Kuyperian worldview. “It’s a way of taking academic work and faith seriously,” he says. For him and his colleagues, the two are inextricably intertwined.

Asked what they most loved about the history department, the history faculty all agreed: the close connection they share within the department.

“This is by far the best departmental situation I’ve ever been a part of,” says Culpepper. “It’s a great community of Christian scholars. We have fun. We love what we do. We may enjoy it a little too much sometimes,” he adds with a chortle.

“We all get along,” adds McCarthy. “That might not seem like a big deal. But it really is.”

“Often, we’ll kid and mock each other,” says Fessler. “I get mocked more than anybody else—maybe because of my tribble.” He lifts a strange furry ball off his desk and sets it in his lap. It purrs when he touches it. “It’s from Star Trek. Walker makes fun of it…”

“Because it’s creepy,” Cosgrove quips from the other room. “None of us take ourselves too seriously. We’re like a family. We accept each other for who we are, regardless of political or theological differences—or idiosyncrasies. Everyone can both give and take. That’s rare in the academy, where there are a lot of a fragile egos. I appreciate that. Most of the time,” he adds wryly.

The comradery and whimsy grow out of what truly draws the department together: their shared vision. That close personal connection allows them to work toward a common purpose.

To nurture this collective vision, the four professors meet regularly to study and talk together. They have read and discussed more than a dozen books—along with monographs and articles—to help them explore and think about a Reformed perspective in history. They have read books such as Confessing History by John Fea, Dealing with Darwin by David Livingstone, and Roots of Western Culture by Herman Dooyeweerd. What began as an orientation for new faculty quickly developed into a commitment to grow as a department.

“Anybody with a degree of humility would admit that it’s hard to get a grasp on how to think ‘Christianly,’” says Cosgrove. “By meeting on a regular basis, we can pursue that together. It ensures that a similar perspective will guide our core classes, which we all love teaching. Even if the classes are different in pedagogy and style, the overriding viewpoint guiding them will be the same.”

For Cosgrove, the key to understanding worldview is not talking about it, but living it. He feels strongly enough about this that each semester he sits in on a colleague’s course—for every single class. By observing how others live and teach, he tries to understand how they think about teaching Christianly.

“I could sit down and ask them what teaching ‘Christianly’ means to them, and they could give me good words,” he says. “But watching them live it out gives me a better answer. The best teachers teach out of who they are. It helps me reflect on myself and how I approach my own teaching.”

“In Core 140 and 145, we look at the development of worldview,” says Fessler. “How has truth been considered throughout the ages? How does a Reformed perspective pull things together? That’s not an overarching theme you’re going to get if you take history at most places. Students may not remember all the names and dates, but they will learn that ideas are important, and they will know how to discern the religious spirit they come from. Nothing is neutral.”

All of Dordt’s history professors believe that history offers an opportunity to wrestle with big questions—to help students understand human beings as religious creatures, as worshippers.

“We might disagree with how that plays out,” says Cosgrove, “but the key is understanding that what we worship affects all that we do—whether politics, economics, warfare, or scholarship.”

“History is not an objective science,” he adds. “There are no definitive answers; you’re always coming at it from a perspective. And any worldview comes out of our deepest heart convictions. Dordt’s Educational Task describes how who we are as Christians is integral to everything we do. It’s not that I’m a historian and I need to integrate Christianity into my discipline and teaching. Christianity is at the core—of who I am as a human and how I teach history. I try to help students see that.”