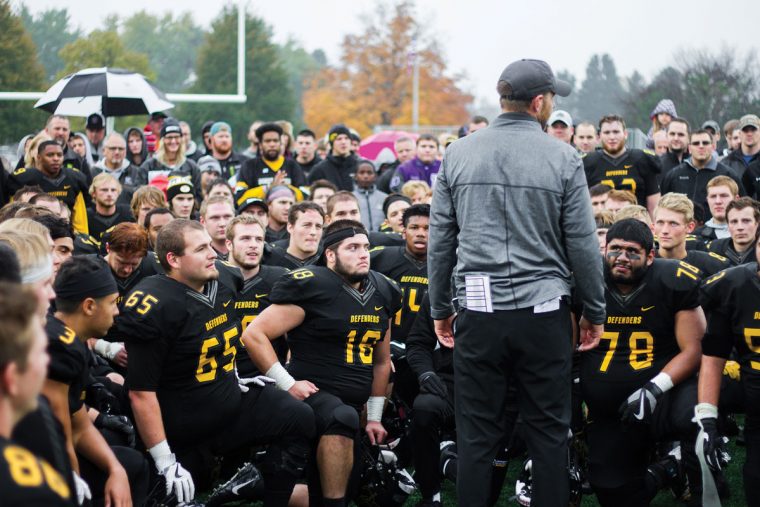 MORE THAN A GAME

Dordt’s football team under Coach Joel Penner had its best year in team history, but its impact has extended far beyond the field’s boundary markers and goal posts.

Rod De Boer, a Dordt football fan since the team began in 2007, has watched the program grow through several winless seasons to last year’s 5-5 record-breaking year.

While De Boer has enjoyed seeing the team become a serious competitor for opponents, the most rewarding thing for him has been to be a part of the host family program that pairs families from the Sioux County area with Dordt football players from all parts of the country.

“The host family program allows you to meet a lot of great kids who also happen to play football,” says De Boer.

This program may be one of the reasons many people seem to be buying into Dordt football. The team’s growing popularity is partly because of the way players execute the game, but it is also because of the way they live their lives outside of football.

On the field, the team has adopted the term “the ninth team”—those who sit on the sideline. “It refers to the energy that players who aren’t in the game bring to the team,” says Nicholas Carbone, freshman offensive lineman. The sideline is called the ninth team because they aren’t on one of the eight major parts that make up a football team: defense, offense, kickoff, kickoff return, punt, punt return, field goal, and field goal block. However, those sitting on the sideline can have a big impact on the game; Dordt’s ninth team does, and their energy has crept its way into the Dordt community.

Kuyper Scholars Program Director and English Professor Mary Dengler describes the football players in her classes as “dedicated, hard-working, and academically serious young men.” She appreciates their diligence in their studies despite the challenges that being involved in football can bring.

Dordt football players are standing out in a beleaguered sport.

“I enjoy two things about the football players in my classes: They fill the front rows, and they call me ‘sir,’” says English Professor Bob De Smith. “It’s not that I need to be addressed that way, but it’s a nice reminder that respect between teachers and students is worthwhile.”

Dordt football players get into the community, too. Many of them volunteer at local elementary and middle schools as mentors, tutors, and friends.

Team members make up about eight percent of the student body on campus, but the way they move in packs makes their numbers appear even larger. The team shares a brotherhood—an inclusive one, where even non-football players are welcomed.

“Great college football in our rulebook is bigger than just the score after the game or a record after a season,” says Penner. “When it is all said and done, football at Dordt ought to be a light in the often dark world of competition.”

Dordt’s football team is using their sport as a platform for positive change in both the college and community.