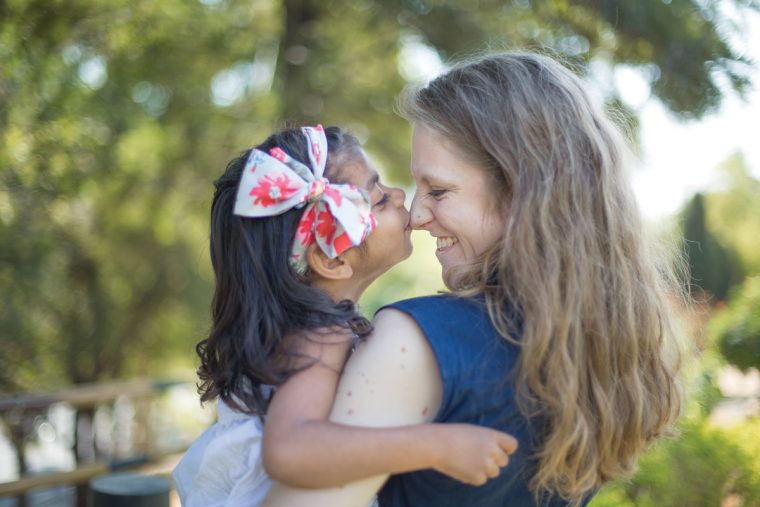 AGENT OF RESTORATION IN A BROKEN WORLD

Merissa Harkema (’13) is a planner. Even before she attended Dordt and majored in psychology and exercise science, she knew that she wanted to work in occupational therapy. She ended up at Washington University in St. Louis for graduate school; from there, she set her sights on using her skills to help others.

“I knew I wanted to work with vulnerable populations and do something health-related that was also hands-on,” says Harkema.

She didn’t realize that, only two years after graduate school, she would end up working as a foster parent for 12 children at Sarah’s Covenant Homes in Hyderabad, India, and adopting a four-year-old girl named Divya Jane.

“I was planning to go back to get my doctorate, but I met another occupational therapy student who had been on a short-term mission trip to SCH,” says Harkema. “She mentioned SCH in passing, and I was really interested and asked to see photos and hear more.” In the end, Harkema and her friend decided that, after graduation, they would go work at SCH together.

“I had never been to India or even heard of SCH before talking to my friend, but it felt as if everything aligned,” she says. “I find big decisions difficult to make sometimes, but God made it really clear that working at SCH was the next step I was supposed to take.”

SCH provides alternative housing for children with disabilities who have been abandoned or relinquished by their birth families in India.

“Across India, a high numbers of kids with disabilities are relinquished to institutions by their birth families partially because of the cultural attitudes, which are very negative toward people with disabilities,” says Harkema.

In government orphanages, children with disabilities can be extremely neglected. At SCH, however, children get to live in foster homes where ayahs—local women who serve as nannies—help with basic care. The homes typically have foster parents, too.

“That’s my role—I’m a foster mother in one of the homes,” says Harkema. She co-fosters 12 children with Nikki, who has worked at SCH for five years and specializes in working with blind children. As a skilled occupational therapist, Harkema provides therapy to her foster children. She also serves as teacher for some.

“We set goals for all the kids in our home,” says Harkema. “For our kids who attend a community school part-time, I work on developmentally appropriate academics such as literacy or math skills, often through play. For our kids who are non-verbal and have no opportunity to attend a community school, I focus primarily on alternative communication such as an eye-gaze controlled computer to give them a voice and an ability to express their thoughts.”

In total, SCH has seven family-style homes where staff care for 150 children and young adults. SCH’s goal is not to replace loving biological or adoptive families but to be the closest alternative while children wait to be adopted or reunited with their biological families.

“SCH is a forerunner in progressive child welfare in India, and it’s really awesome to be part of a cultural shift toward acceptance of people with disabilities,” says Harkema. “It is such a gift to be able to show these kids God’s love each day.”

One way in which Harkema has chosen to share God’s love is by adopting her daughter Divya.

“I always knew that, if I were to adopt, it was going to be a child that was getting overlooked by other prospective adoptive families,” says Harkema. “The majority of kids adopted from India are under three years of age. Most have minor disabilities. Divya is four years old, has cerebral palsy, and can’t walk. She’d never had a family inquire about her.”

Why did Harkema decide to adopt? She says that, among many other reasons, she wanted to “put my money where my mouth is.”

“My heart is drawn to kids with disabilities and adoption, and I’m trying to open people’s eyes to how incredible these kids are and how great the need for adoption is,” says Harkema. “I am grateful for my current role as foster mom, but it is blatantly obvious that what these kids need is a permanent family. While I can’t be the permanent family each of the kids needs and longs for, I am so grateful to God that my time in India has resulted in one less child without a family.”

In January, Harkema got word that she could move forward with adopting Divya. “I look at Divya and think, ‘How did I get you as a daughter? You’re so wonderful,’” she says.

Harkema sees her experience at Dordt as directly influencing her decision to move to India, work at SCH, and adopt Divya.

“Dordt was instrumental in shaping my worldview,” says Harkema. “When I made my decision to move to India, I had several people tell me that it was a foolish choice and that I was sacrificing my future and financial stability, because it’s a volunteer position. But, through what I learned at Dordt, I know that Christians should be agents of restoration in a broken world. I see myself as having a role in bringing some restoration to this brokenness.”