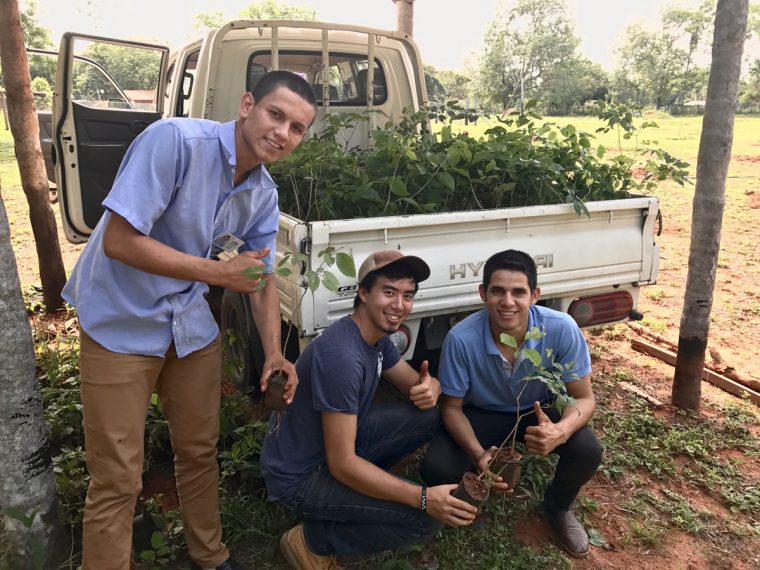 ROSKAMP CREATES HIS OWN OFF-CAMPUS OPPORTUNITY

What do you do if you are a Dordt College agriculture major itching to get some international field experience, but Dordt doesn’t offer an ag-specific off-campus program? You design your own, of course.

Senior Sam Roskamp worked with his academic adviser, Dordt’s global education office, his parents, and local contacts to arrange a semester program in Paraguay last fall. Roskamp stayed at a high school where, in addition to taking academic courses, the 150 high school students maintain and manage the school and the school’s farm. Roskamp oversaw a new hydroponic system and participated in a reforestation project. He also worked with other agricultural institutions to graft mango trees and tomato plants, market medicinal plants, tour with a Korean extension group partnering with poor farmers, and work in a Taiwanese extension group’s greenhouse.

“I went to Paraguay not necessarily to help teach other students what I had been learning, but to get a pulse on the country’s culture, political infrastructure, worldviews, economic well-being, and everything that defines it,” says Roskamp. “Before we can think of aiding and assisting those living under poorer conditions than ourselves, we need to understand the various forces that influence the conditions and circumstances that they are in.”

Roskamp’s father, who spends much of his time in Paraguay, agrees that it is important to live in a culture to understand it. “General principles, whether in ag or other areas, need to be applied uniquely to the challenges of local situations,” says John Roskamp. “Seeing how things work in agriculture, language, climate, economic and religious environment deepens one’s understanding and challenges one to see where he or she is lacking or up to the task.”

Roskamp’s semester abroad began by meeting with the global education and agriculture departments to explore what it might take to earn Dordt agriculture credit while living in Paraguay. His parents—who served in Paraguay for 12 years and plan to relocate there again in the near future—were familiar with local Christian schools and agriculture organizations. Part way through the process, they discovered that Roskamp had accumulated enough credits to take the semester off; so, instead of being a Dordt student while in Paraguay, he was a Dordt ambassador, helping build relationships between Paraguayan administrators and Dordt faculty and staff.

“Sam’s motivation and dedication to learning agriculture in Paraguay allowed him to persevere and overcome many challenges,” says Dordt’s Director for Global Education Adam Adams.

And because of Roskamp’s time in Paraguay, Dordt’s agriculture department became acquainted with the organizations he served, possibly opening the door to other students who may wish to spend a semester there.

“We hope that other students will visit Paraguay to study, apply what they have learned, and, frankly, come to grips with a different part of the world,” says John Roskamp. “We have had wonderful students from Paraguay study at Dordt, and it would be wonderful to have some come the other way.”