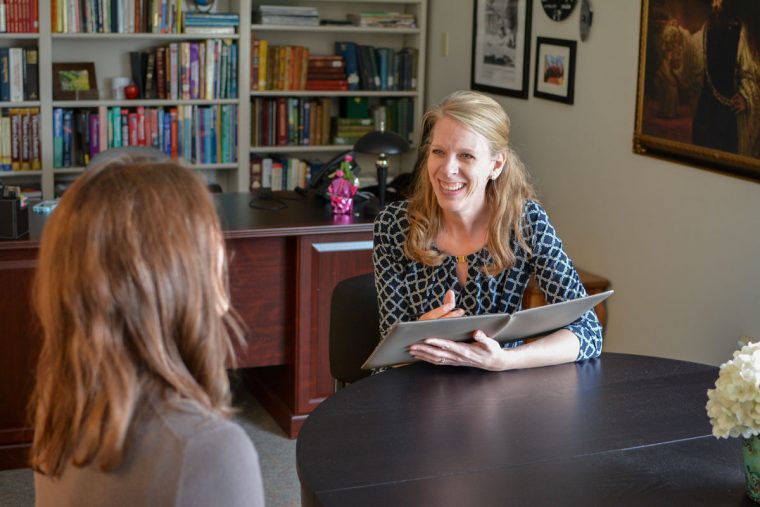 Sarah Eekhoff Zylstra (’01) grew up in Kanawha, Iowa—a tiny pocket of people in northern Iowa. Her parents and uncles all went to Dordt, so she decided to as well.

Zylstra majored in English and communication. Back then, students interested in journalism majored in either English or communication and chose a journalism emphasis. When Zylstra was a student in 2001, only three people picked that option, but her experience was a good one. The small group of students worked closely with and were mentored by former Communication Professor Dr. Tim Vos, who also worked as news director at the college radio station. Zylstra took classes in broadcast, writing, and design.

But Zylstra’s most formative journalism experience at Dordt was working on the Diamond, Dordt’s student newspaper. For a couple years, Zylstra served as editor of the newspaper; she can recall the revolutionary moment when she suggested that writers email their stories rather than turn them in to her on floppy disks.

After graduating, Zylstra moved to Chicago with her husband, Adam Zylstra (’01). She enrolled in Northwestern University’s master’s program in journalism. The training she received and the contacts she made there were invaluable for launching her career.

“Going to Northwestern was an automatic credit for me: It was super invigorating and challenging and all-consuming,” says Zylstra.

Northwestern was a top-ranked journalism school in the country and, in the journalism industry, a Northwestern degree meant that you could write. The graduate program offered a practical program where students learn how to do journalism, rather than about its history or theories. In Zylstra’s first quarter, she covered the police department in Evanston; she visited the station almost every day, riding along with the officers or asking them about programs they were working on.

Each subsequent quarter, students were given a different “beat”–a specific topic to cover. For Zylstra, this included trips to the courthouse, trying to track down interesting stories.

“You’re on your own, sniffing around, thinking, ‘Please let this be a murder trial!’” Zylstra recalls with a laugh.

Her favorite quarter was spent in Washington, D.C., armed with a press pass, covering the news for a daily newspaper in St. Joseph, Missouri. Several times a week, she would receive a copy of the paper with her story on the front page.

It was while working as a graduate assistant for a class on religion reporting that she connected with Christianity Today. After field trips to Sikh temples, Muslim mosques, and Jewish temples, the class headed to Wheaton College to learn about “the strange species of the evangelical.” She met a journalist from Christianity Today, who asked her to write for him and began her 13-year career with the evangelical magazine. Today, she writes about news and issues that affect Christians all around the world, issues such as persecution in the Middle East, how Compassion International was forced to pull out of India, and the closing of 240 Family Christian Stores.

Last year, Zylstra also began writing for The Gospel Coalition, a website that aims to “serve the local church by providing gospel-centered and Christ-focused content.” She writes in-depth features for The Gospel Coalition and covers topics such as “What does Reformed Christianity look like in China?” and “What does Seattle look like after Mars Hill?”

“These stories are fascinating,” Zylstra says. “We look for where the Holy Spirit is doing something amazing, and cover those stories. Sometimes there are hard or sad or difficult things within those stories, but in the end, it is always good news.”

What does it look like to do good journalism as a Christian? For Zylstra, it requires remembering the way God created communication: perfectly. The reality, she says, is that we live in a fallen world where communication is broken. This shows up in egregious ways, such as deceit and manipulation, but it can also happen in subtler ways—people simply not knowing the whole story, or inadvertently passing on misinformation that they believe to be true.

“All of this contributes to the brokenness,” Zylstra says. “As a Christian, I want to focus on redeeming that communication through God’s power in me, since I am as broken as the next person. I try to shine a light of truth on things as best I can.”

Because she’s aware of her own weaknesses both as a reporter and writer, Zylstra prays over each story before she writes it.

“I can’t tell you how much it helps me to tell God, ‘These are your stories. Please help me to see and tell them clearly, the way you want them to be told,’” she says.

Another part of broken communication is bias; everyone comes to a story—either to tell or hear it—with his or her own background and experience. To be a good journalist, according to Zylstra, requires listening carefully to all points of view and pushing back gently when necessary.

Today, Zylstra divides her time between The Gospel Coalition and Christianity Today. But in all her work as a journalist, she continually finds herself coming back to the worldview that shaped her in her undergraduate years.

“Dordt gave me a solid philosophical understanding of the Reformed framework, shaping how I see and understand everything,” she says. “Living on campus with friends who were learning the same theology was more influential than I could ever have predicted. My college roommates are still some of my very best friends, and we still help each other wrestle with life’s big questions – faith, family, church, career – using the thoughtful Reformed worldview I learned at Dordt.”