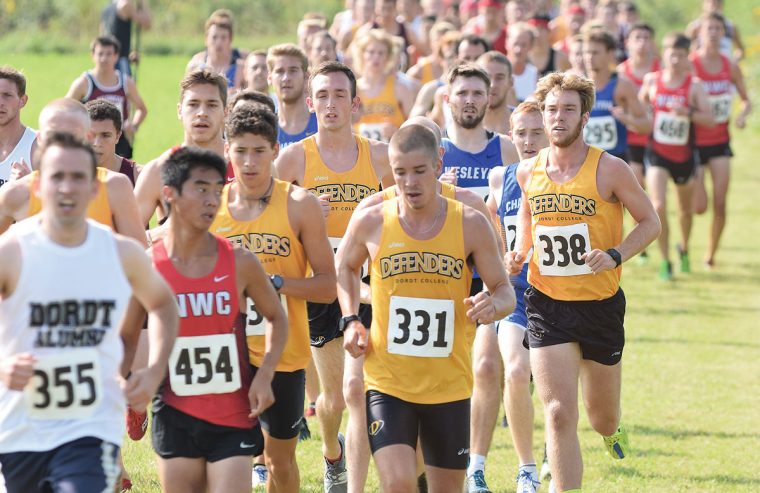 Success has been a long-time attribute of both the men’s and women’s cross-country teams at Dordt; this past fall was no exception.

Dordt hosted two cross-country events this year: the Defender Holiday Inn Express Classic in early September and the GPAC Championships in early November. The women’s team won both of those meets, and the men placed fourth and third, respectively.

Hosting the two meets was significant because, for the past several years, Dordt has turned down the opportunity since the college did not have a good course. Last summer, with the help of Dordt maintenance staff, a new course was created in Dordt’s restored tallgrass prairie.

It began in the summer of 2015 when President Hoekstra asked Dordt Cross-Country Coach Nate Wolf if the team could host a meet in the prairie. Wolf began plotting a course, frequently running through the prairie using a GPS.

Dordt’s prairie is not large enough to run the race in one large loop, so maintenance staff and Wolf measured out a course that had two loops for the women’s race and three for the men’s.

“We had to reseed the start and finish area, rolling it three times to smooth out the bumps and pack it down,” says Wolf. “Because it was farmland, this required some work. The maintenance guys were great to work with. The first time we ran on it, the grass was cut to three inches. I asked them to cut it a quarter inch shorter, and they did.”

The course began and finished on the east side of the soccer fields. The women ran a five-kilometer (3.1 miles) loop that extended from East 1st Avenue on the south side of the prairie to 5th St. N.E. behind the Campus Center.  The women ran the 1.5-mile loop twice.

The men’s eight-kilometer (4.97 miles) course had a similar but slightly longer 1.65-mile loop, taking them behind the Southview apartments. They ran it three times.

Many cross-country races are held on golf courses, but the distances can make it hard for fans to see as much as they would like. Dordt’s course combined what both runners and spectators want—wide-open, pleasant spaces and many good places for fans to watch individual runners.

“A lot of courses have few viewing areas for fans,” Wolf says. “Dordt’s course allowed fans to watch the athletes make their moves. At most races, fans see the runners for a short while before they disappear from sight. When they see them again different runners are out front.”

Dordt’s prairie is a space shared by the entire campus. Maintenance, the biology department, agriculture groups, students, and the community use it in a variety of ways: research, relaxation, recreation. The new cross-country course may have added one more group of regular users, but there is still plenty for everyone to enjoy.

“It is a great course to run on,” says Britta Provart, a senior cross-country runner. “To be able to share our talent with the campus and share our beautiful campus with our competitors was an experience I will not forget.”