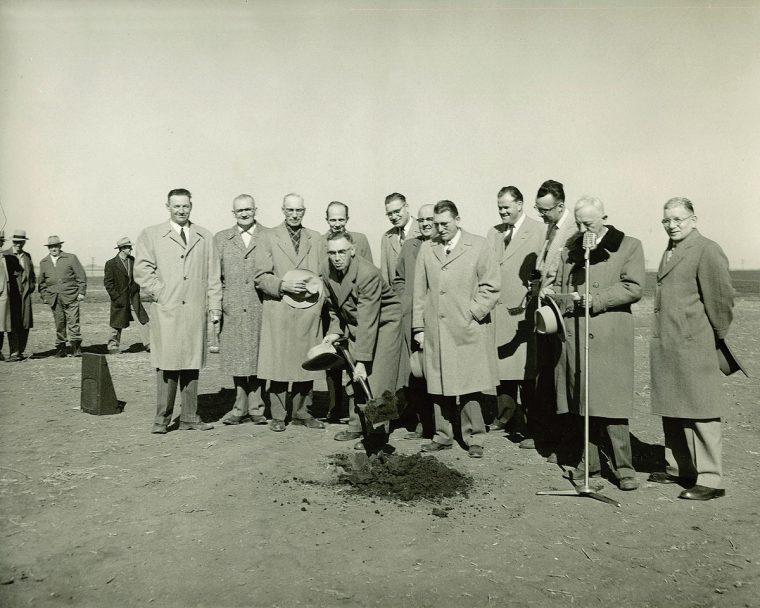 Emily Hageman is exactly what Dordt College wanted, way back when. Ordinary folks from a region called Siouxland understood the time had come to build an institution of higher education right here on the continent’s most fertile ground.They were thinking about hundreds of Christian school teachers needed for the crowd of “covenant children” soon to be school age, children of war vets and their spouses, thousands of them. There was going to be—no, there already was—a dire need for good Christian teachers. That mission created Dordt College.Those pious gents in fedoras and gray suits and ties were not thinking of Emily Hageman herself, and yet they were. They hoped and prayed that Dordt would turn out wonderful teachers for dozens of “Schools for Christian Instruction.” That’s why a spirited young pastor named Reverend B. J. Haan first stuck a spade into that fertile ground to start a building.And all of that is a good thing to keep in mind when you read Emily Hageman’s story. She’s what Dordt was—and still is—all about.

The instructions Emily Hageman (’12) received for the All-State award ceremony said she should sit somewhere close to the stage, up front, where the big announcements would be made. Should is the operative word—they should get a place up close, just in case.

Miss Hageman and her students didn’t, but then, who was Siouxland Christian High School anyway? They’d never taken the stage at an All-State venue before. Besides, the competition was huge: big schools from Dubuque, Des Moines, Iowa City, schools with long-established programs. Most had orchestras larger than the entire student body of Siouxland Christian, Sioux City, Iowa. (If you’re thinking of David and Goliath, go ahead.)

The powers-that-be wanted all contenders up close so they could get to the stage in a flash. But Hageman, who teaches music and drama at Siouxland Christian, and her gang took the only seats they could get, third floor balcony— “I don’t know how many flights of stairs,” she remembers.

When the judge stood up front and opened the note to name the “Critic’s Choice” Award, Miss Emily and her crew were a mile away, just happy to be there.

“And first place goes to ‘Back Cover,’ by Siouxland Christian,” the judge said.

Not a student in her troupe would have expected Miss Hageman to do anything other than she did. She stood there and screamed. As did they.

They’d won. All-State. Tiny Siouxland Christian, in their first year of competition, had won. Goliaths tumbled. Emily Hageman turned sprinter all the way up to the front because they’d won.

President B. J. Haan would have been proud.

Say what you want about technique and thorough lesson plans, the best teachers are what they are because they pull the very best from their students. Hageman’s kids will tell you in no uncertain terms that she pushes them hard, often a furlong farther than they believe they can go. In so doing, she gets their best. And they know it. That’s why they love her.

Acting requires some displacement of self. If you want to play Lady Macbeth, you don’t have to be her, but you have to understand her. Hageman’s students claim that when they go through a script, she asks them to undertake something very difficult, to understand human beings, to understand life itself.

“She teaches us to be real,” Sarah says.

“Miss Hageman helps us understand people,” Mikelie says, “and even understand ourselves better.”

Rachel says, “She teaches us how to be real.”

Austin remembers playing a kid whose father had walked away from the family: “I had to feel what it might feel like if my dad left. You learn what happens when we depart from God’s will.”

Hageman’s students can be deadly serious, but they’re kids, and in a flash a laugh becomes a chorus. “Miss Hageman,” Austin says, “is a hoot.” They have plenty of stories to back that claim.

In 2008, when, as a high school senior, Emily Hageman visited Dordt, she says she felt immediately at home. “I had this sense that I could be there, that I could live there,” she says

In September, she came to Dordt alone. She’d grown up in Denver, was a graduate of Denver Christian High, the daughter of educators, a dad who directed plays in the high school where he taught, and a mom, a Dordt grad herself (Cheryl Van Kooten, ‘79), who works in special education.

“Teaching is in my genes, I guess,” she says.

But she also claims she’d come to understand that a classroom bestows both blessings and curses.

“I watched my parents,” she says. “Teaching filled them up—but it also wore them down. I knew it wasn’t always easy.”

So, she started college majoring in psychology, thinking she’d avoid teaching. She soon realized, though, that what she really loved was music and theater. Those passions required a major other than psychology, so she changed to education, then walked over to Sioux Center High for her twenty-hour practicum.

Just observing choir practice at the school a block away from campus was transformative.

“Teaching seemed to me both attractive and scary at that point,” she says. But watching those students made her believe that teaching—music and theater especially—was something she could do.

Performance was important to Hageman and still is. At Dordt, she appeared in seven mainstage productions and sang with the Concert Choir for three wonderful years. For a time, she considered a major in music performance, but stayed in education because she knew—as did her parents—that someday she’d need a day job.

At Dordt, she says, she learned two distinct directives: the importance of excellence and of love. The two don’t always pair easily. In her significant experiences (“I had an awesome time”) in both theater and music, she learned from directors she felt loved her, but pushed her hard towards excellence.

“That helped me so much,” she says.

Student teaching greatly encouraged her. Her supervising teacher as well as her mentor made it clear she wasn’t perfect—no one is; but they also said, “Hey, you could do this—and you could be good at it.”

She came to believe that God had given her a gift, so she began teaching music and directing choirs.

“When I worked with students, I got the sense that they were responding, really responding—actually listening to what I was saying,” she says. “I just loved being around the kids. They’re right on the brink of adulthood, and there’s so much shaping that goes on their lives.”

Hageman graduated with an education degree in December of 2012, when teaching vacancies were few. To fill in, she took a job as a teller in a credit union back in Denver, even told herself she’d be okay with the job.

“I was comfortable, safe, no pressure,” she says. But in late spring, she started sending off résumés, including one to a Christian school in Sioux City.

When she visited, everything about Siouxland Christian looked affirming, despite the fact that it was really small, and the building wasn’t even a school. Kids met in a church. There was no choir room to speak of.

No matter. Somehow, she felt a part of things.

“I remember walking through the hallways of the old school, and thinking, ‘I need to be here.’” Classmates were finding jobs in schools that had been around for a century. To her parents, the choice seemed, well, questionable. But convictions count, and Hageman was convicted: Siouxland Christian was calling, and it was the right place.

This year, there’s a brand-new 12.4 million-dollar campus, a good-looking place just off the freeway, hard to miss if you’re driving south from Sioux Center. She has her own spacious room now, a real band and choir room with big windows.  She teaches a theater class that involves a lot of reading and rehearsing.

Six years ago, when she came to Siouxland, not one student had signed up for choir. No one. This year, Miss Emily Hageman directing, Siouxland Christian staged The Sound of Music. And this year, Siouxland Christian will send four performing groups to All-State, only their second year of competition.

There’s one more part to the opening story. When Hageman stood in that packed theater and screamed at the announcement that “Back Cover,” from Siouxland Christian High School, had won “Critic’s Choice,” she wasn’t just happy for her students. Hageman herself had written “Back Cover” and turned it into a piece her students could perform.

As she began preparing her students for their first year of competition, Hageman noticed that what played well was something historical, “something with a foundation.” She’d been reading a book about 9/11, and suddenly, while out walking one day, the idea came to her fully outfitted, an entire plot line.

“I wanted to write something ‘coming of age,’ something that asks, ‘Who makes you?’—‘Who makes you who you are?’ And this whole story just came to me,” she says, still shocked. “It was from God because that’s not at all how I work.”

“Back Cover” is a generational saga about a young woman who reads the letters of another young woman and learns, by identifying closely with her, that what’s inside a person is something that can be built by dedication and perseverance. When she discovers the 9/11 death of the letter-writer, she’s thrown into darkness.  The voice that was so confident was stilled, gone.  It seemed a waste.  But a teacher helps her understand that you can’t judge a book by its back cover. The play is realism, and its themes are life and death, nothing frivolous.

“What are you going to do if we win Critic’s Choice, Miss Hageman?” one of the kids had asked.

They went bananas. “Well it’s not going to happen,” she told them, meaning winning first place.

The trip back was a triumph. “We rode the bus back to Sioux City, and it was beautiful,” Hageman says.

Just for the record, here’s her principal, Steve Peters: “Emily Hageman has been an invaluable part of our staff at Siouxland Christian. She is far and away the best band and theater teacher I’ve had the honor of working with. Emily is a godly and effective teacher who exemplifies what Christian education is all about.”

Old President Haan would have loved her story, would have smiled that big toothy grin of his.

Maybe he did. Maybe he was there, in that theater, somewhere behind the cast, with a whole cloud of witnesses in gray suits and ties.