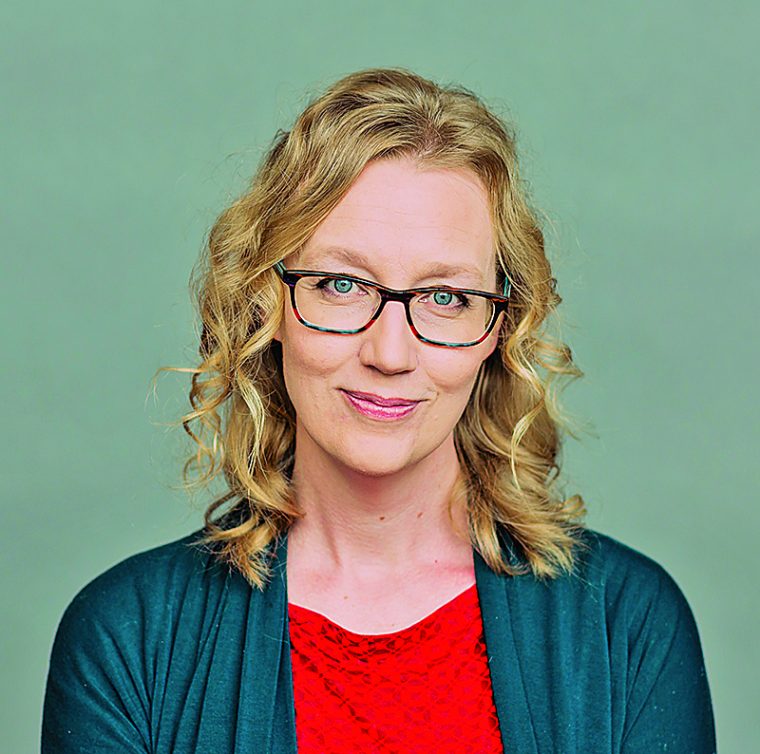 It’s evening in Dordt’s library. Off to the side, near the journal shelves, are the carrels. A group of students from a variety of majors are tucked into desks, bent over their books, sipping coffee from Dordt-issued recyclable mugs. It’s a quiet space—except when it isn’t.

Students lean over one another’s desks. Conversations on a host of topics waft through the air, one quickly leading to another: social justice, race, urban issues, poverty, environmentalism. Excited plans for PLIA trips to Philadelphia spring up. The students share their thoughts, wrestle through difficult questions, and push one another and themselves to seek answers.

This was the “carrel community,” self-designated by those who virtually lived there, especially during end-of-semester crunch time. Among these students was a young woman named Kristin Kobes.

“Sometimes things got a bit rowdy,” says Kristin Kobes (’97) Du Mez. “The librarians probably have a less-rosy recollection of us. But the people who spent their evenings in the library were the nerdier sort—perhaps ‘intellectual’ is a better word? We found each other and created that intellectual community.”

“One day, he came by my carrel and insulted the sculpture I had on my shelf—a dog made by my sister, who was in grade school. He said it looked like a cow. I later brought my sister in to confront him, but he didn’t back down,” she says with a laugh. “Now, they’re family.”

She and Jack would meet again five years later, at a friend’s New Years’ Eve party at the turn of the millennium. A few months later, he would propose.

Kristin’s father, Dr. Wayne Kobes (’69), taught at Dordt for many years. Du Mez always knew she would be a Dordt student—and that prospect excited her. The daughter of a theology professor, she grew up with words like “reformational” floating around the home, but she had never quite fully understood them. Dordt, she knew, would be a place where she could delve into them more deeply.

While she loved all four years at Dordt, Du Mez says that her best memories are from the carrel community.

“We learned to practice critical thinking: to articulate our own ideas and test them out in a group of friends. It was challenging, loving, and deeply Christian,” she says. “We were seeking the understanding that our faith could bring to a whole slew of cultural issues. And Dordt was small enough that you could have a common conversation. If a speaker came to campus, we would all go to hear it. I found it to be a really intellectually rigorous environment.”

Du Mez says Dordt gave her a solid theological grounding, from courses on Calvin and basic theology, to philosophy from Dr. John Vander Stelt and history from Dr. Hubert Krygsman. It was at Dordt, between talking with other students and learning in the classroom, that she first developed an understanding of justice as part of the Christian tradition. Speakers on campus would challenge students to wrestle through issues of race and environmental stewardship. Much of her thinking and writing today, she says, was shaped by that formative time at Dordt.

Though a history major, Du Mez was also pre-med for a portion of her college career. She recalls one of her most interesting courses: an engineering capstone course with Dr. Charles Adams. It was interdisciplinary, comprised of engineering students as well as philosophers and historians. The class topic was designing an engineering business, but doing so in a way that considered all aspects of business: not just how to run it, but how to do so as faithful, obedient Christians.

“That kind of holistic thinking was really generative at the time,” she says. “It opened my eyes to the different ways you can love your neighbor, seek justice, and care for those in your midst and for the world.”

After four years at Dordt, Du Mez knew she wanted to keep learning. Following graduation, she studied at the University of Notre Dame for her Ph.D. in American history, under Dr. George Marsden.

“When I first got to Notre Dame, I was intimidated,” she recalls. “I was from the middle of nowhere, sitting in class with famous professors. I wondered if I would measure up. But what I quickly learned was that Dordt had prepared me really well. All the questions about a reformational approach to subjects, the way every professor forced us to critically engage with the knowledge we received—all of this set me up well for graduate work: looking more deeply into a text and bringing my own questions to it.”

Her experience as an exchange student in Germany during her senior year of high school had drawn Du Mez to want to study her own culture: hence, American history. Beyond that, she hadn’t found a specific area that intrigued her. But in her first semester of graduate school, she was assigned to read a book on gender history by Kathleen Brown.

Du Mez recalls how as an undergraduate, she wasn’t interested in women’s and gender history, because in Christian circles in the ‘80s and ‘90s, it was often reduced to the narrow question of women’s ordination. But in reading Brown’s book on masculinity and femininity in colonial America, and how issues such as power and race played into ideas of manhood and womanhood, she found the subject to be much more fascinating than she’d originally thought.

“I had gone to grad school to study intellectual and religious history, because I thought that was the history that really mattered and made the world work,” she says. “But when I started reading more cultural history, I began to understand that those views shape our experiences more than I had ever realized. ‘Christian ideas’ of masculinity and femininity have changed over the centuries, and are subtly interlinked with so many other values. That really changed the course of my studies. I declared a field in women’s history, and I haven’t looked back.”

While finishing her degree, Du Mez taught at Williams College for a semester and worked for the Five College Women’s Studies Research Center Five College Women’s Studies Research Center at Mount Holyoke. After graduation, she accepted a position as a professor of history at Calvin College, where she currently teaches courses in U.S. history, women’s history, and world history.

“I love digging into a text in community,” she says. “As a class, we really wrestle with ideas together. There are so few spaces where you can engage ideas with real people, not in a virtual space, and not just throwing around opinions but having a text in common to shape the conversation and bring it to a much deeper level. It’s a privilege to get to do that on a daily basis. To create that space, to challenge students to think more carefully, to foster those conversations, is what I love about teaching.”

Du Mez’ 2016 book, A New Gospel for Women, is a biography of the 19th-century Methodist and social activist Katherine Bushnell and has been called “a dazzling hybrid of history, biography, and theology.” It explores the relationship between Christianity and feminism in American Protestantism. This led her to one of her current projects: a study of Hillary Clinton’s religious formation in progressive Methodism, focusing on her views on women’s rights, civil rights, international development, and progressive activism.

While teaching at Calvin, students often shared with her books that they were reading in their dorms. One in particular stood out: John Eldridge’s Wild at Heart—a book described as having “revolutionized Christian manhood.”

“There were dozens of books around that time which argued that to be a man of God is to be aggressive, macho, a warrior,” she says. “It’s a very militaristic model, with a correspondingly-distinct view of femininity. With my background in gender studies, I found the appeal of this fascinating from a cultural lens. But I also had some nagging doubts. Then, with the Trump election, it started to click for me: The masculinity that Trump embodied was not far from the model of masculinity portrayed in this type of evangelical literature.”

In 2017 Du Mez wrote an article for the online journal Religion & Politics on evangelical masculinity and the rise of Trump. The article soon went viral, and eventually she was asked to write a full book on the topic, which she hopes to complete sometime next fall. She has also written linguistic analyses on Trump’s campaign rhetoric.

Besides writing and teaching, Du Mez has given presentations at numerous conferences and served on panels at venues such as the University of Notre Dame, the University of Iowa, Harvard Divinity School, and Calvin’s Festival of Faith and Writing.

A rising scholar in the world of Christianity and gender studies, Du Mez says that her time at Dordt shaped her to be the person she is today. She remembers with fondness the formative years spent with friends in the library carrels, wrestling through ideas, and laying a foundation that she could build upon for the rest of her life.

When asked what advice she would give to current Dordt students, Du Mez responds, “Make the most out of the time and space you have. Really push yourself. Build skills of critical thinking, relationships with fellow thinkers and critics, and a strong theological foundation. At a place like Dordt, that foundation doesn’t just come from theology courses; it is everywhere. So be intentional—cultivate the intellectual and spiritual habits that you will take with you when you leave Dordt.”