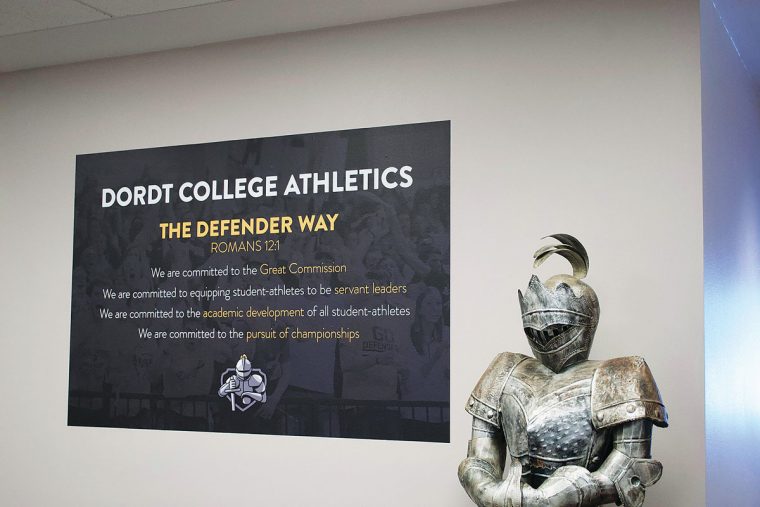 Athletic director Ross Douma has made implementing the Defender Way concept a top priority during his first few months on the job.

“Many collegiate mantras like ‘Defender Way’ have performance and behavioral-based initiatives and targets,” Douma says. “We have that as well, but we add a Christian component that is meaningful and enriching.”

Douma is quick to point out the order of the four components. For him, the first and most important is the Great Commission. Dordt men’s basketball team has traveled to Chicago in recent years to lead a camp at West Side Chicago Christian School, and the football team has partnered to assist with the Special Olympics. Douma sees both as opportunities to spread the love and good news of Christ.

Servant leadership and academic development are close behind in importance for Douma.

“We want our athletes to become great people who excel in the classroom,” Douma says. “The Defender Way brings a greater degree of accountability to our athletic program.”

During the 2016-17 academic year, Dordt athletes achieved a 3.27 combined GPA. Coaches now require their athletes to have instructors sign progress reports that confirm that they are performing to their potential.

The fourth component is winning championships. While producing top-notch athletic teams is important, Douma believes the first three are a priority for the long term.

This summer, Douma and the coaching staff of each team will sit down and discuss how to make each of these elements function in their programs.

“It will look different for each team,” Douma says. “The basics are the same, but each coaching staff knows their team and the best way to get the most from them.”

Douma acknowledges that the first two aspects of the Defender Way, in particular, are hard to quantify, but that won’t stop the athletic department from working to put them into practice. He believes that as seniors pass on these values to juniors and juniors to sophomores, the goals and ideals embraced in the Defender Way will become an integral part of the program.

“I hope when high school students are introduced to our athletic department, they see us living out these four components,” Douma says.