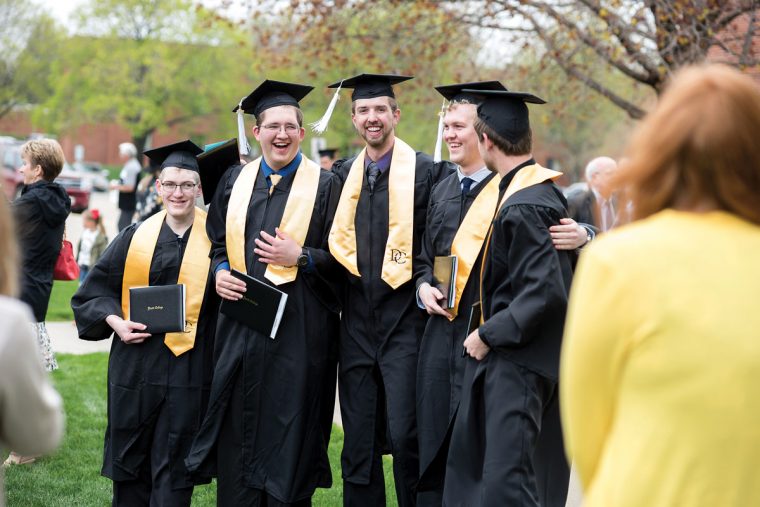 “Commencements are backward events,” said engineering professor Dr. Ethan Brue in his commencement speech. “No matter how many times people note that to ‘commence’ means ‘to begin,’ everything today suggests that we are at an end. You are finished—binders emptied, textbooks shelved, dorms cleaned. For better or worse, commencements will always feel like backward beginnings.”

On May 11, 307 students graduated from Dordt; of those, 27 were engineering majors. For the past four years, they had learned from Brue and other engineering faculty. They had spent afternoons poring over lab assignments and late nights calculating equations with fellow engineering majors.

“’Class of 2018, this is an important day.’ Do you know how many commencement speakers are out there saying the same thing?” said Brue. “I don’t mean to disappoint you, but commencements, like births and, yes, even funerals, are rather ordinary occurrences.”

One soon-to-be graduate sitting on the B.J. Haan Auditorium stage was engineering major Micah Tjeerdsma, who had long anticipated the day he would go through this “ordinary occurrence.” Engineering had always been part of life for Micah; his father, Brent (’93), is an engineer at Trane Manufacturing in Sioux Falls.

“I really became interested in engineering because of my dad,” says Tjeerdsma. “I’d visit him at the office, and he’d give me little tasks to work on. He talked to me about how he would design things and, essentially, make them come to life. I thought that was pretty awesome.”

Another senior engineering major at the commencement ceremony, Laura Baridon, had the opposite experience when choosing a major. She considered math, music education, and graphic design before setting her sights on engineering.

“I didn’t have much exposure to engineering in high school,” she says. “I liked math and science, and I knew that starting in engineering was better than coming back to it later.”

No matter how they ended up in engineering, most majors agree that the program’s small class sizes and caring professors made the difficult coursework easier. Jordan Severson says that his first semester at Dordt as an engineering major was also spiritually transformative.

“I remember calling home during my first semester and telling my dad how I’d learned how my faith can tie into my job as an engineer every day of my life,” he says. “I hadn’t experienced that spiritual aspect at my public high school, so it was really amazing to learn that at Dordt.”

“Dying with Christ and becoming dead to sin, day after day, is a non-negotiable for our lives lived coram deo,” said Brue at commencement. “Dordt’s curriculum has one critical prerequisite: You can’t get into Resurrection 101 if you’re not dead yet, and Resurrection 101 is a co-requisite for every other course at Dordt. If Dordt is to stay true to its mission, this will not change. My hope is that very little of what you learn here will make any coherent sense to you apart from the resurrection of Jesus Christ and the initiation of the cosmic re-creation and restoration project that he is busily working on, even as I speak.”

“One of the most important things I’ve learned at Dordt is that we’re called to be stewards of the earth,” says Baridon. “We’re working toward reformation and the restoration now; this isn’t something that should wait for later.” Dordt’s engineering faculty have taught her that the cultural mandate calls engineers to fill the world with technology that brings glory to God, helps others, and helps creation.

“In engineering classes we talked about bringing out the inherent properties of materials—a tree, for example, can flourish as it grows, but God has also built into its wood something that we can bring out,” says Baridon. “Our job as engineers is to look at things and see what might be the best use of them and how God might have intended them to be used.”

“Part of being a Christian engineer is, as Professor Timmer puts it, ‘learning how to be able to identify problems and then prescribe healing,’” says Severson. “Engineers are not exclusively the healers of creation, but we see problems caused by sin and then we get to seek a solution.”

“Without the resurrection, every lab report, paper, composition, design project, or work of art—even every diploma—is nothing more than a meaningless wisp of smoke,” said Brue, “and to hold it out to you this morning as otherwise is to send you chasing after the wind with only a piece of paper, as our colleague in Ecclesiastes reminds us.”

Following in his father’s footsteps, Tjeerdsma has accepted a sales engineer position with Trane in Appleton, Wisconsin. He will spend two years training with other sales engineers before building up his own customer base.

“I’ll meet with customers, learn about their businesses, and show them what we have to offer,” says Tjeerdsma. “When I’m in the office, I’ll design heating and air conditioning systems to meet specifications for certain buildings. But I especially like getting out of the office and visiting with customers; that’s probably my favorite part.”

Baridon will return to John Deere, where she interned last summer, to be part of their two-year rotational development program in the agriculture and turf division.

Severson has been accepted to the University of Nebraska-Lincoln’s engineering program to pursue graduate work in aerospace engineering.

“My Dordt professors told me that I’d do well in graduate school, and they encouraged me to apply,” says Baridon. “After I got accepted, everything just fell into place.”

“You need to know that for however many years you have been here, you have made Dordt a better place, and the name ‘Dordt’ is now a richer name,” said Brue. “Thank you. Thank you for carrying our interesting and odd little name with you. I hope it will always make you look out of place, backwards, and somewhat foolish in a ‘good news’ sort of way.’”