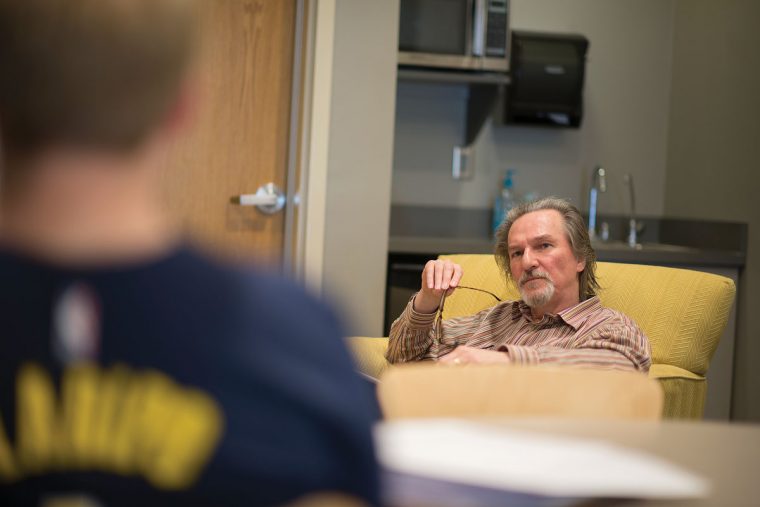 Stop by the coffee nook outside of the philosophy pod on any weekday afternoon, and you might run into Dr. Mark Tazelaar conversing with students. This isn’t an ordinary conversation; it’s a tutorial for Tazelaar’s Introduction to Christian Philosophy class.

“I want to help students develop confidence in their ability to verbally present their thoughts,” says Tazelaar, a philosophy professor. “In life, most conversations happen one-on-one or in small groups. Will students be able to speak up and articulate their thoughts? I think the tutorial format encourages them to learn this skill.”

Tutorials are a nod to the Oxford University tutorial system, where faculty meet individually with their students to engage in discussion. Tazelaar prefers to hold tutorials with three students at a time; he wants his students to engage in conversation, and he has found that, in pairs, students either tend to agree or take sides against each other.

“With three students, it’s harder for them to land on the same page,” says Tazelaar. “Three keep the conversation going, and it’s harder to be dismissive of two voices—to conflate them into one voice—than it is to dismiss only one other voice.”

“In no other class would I have been asked—required—to unfold my entire theological background and then be blown away in the next five minutes by someone else telling their story, which was so fundamentally different from mine,” says Huizinga. “Nowhere else would I express an opinion and then be encouraged to trace that opinion back historically, with a professor sitting right there and helping me along in painting that path.”

Tazelaar requires all students in the Introduction to Philosophy course to participate in the first tutorial; after that, they can choose between taking a written test or continuing with the tutorial. Huizinga chose to stick with the tutorial because she felt she learned something new there.

“Few college classes teach you how to listen to others as they articulate their opinions,” says Huizinga. “In tutorials, talking over each other doesn’t do any good, grade-wise. You’ve got to be eloquent but fair about the things you say and how you interpret what others say. It was essentially a crash course in learning to converse in a small group setting.”

“The tutorial is really less about testing them in the ordinary sense than it is about introducing them to the process of inquiry and discovery,” says Tazelaar. “My hope is that they better understand the need to deepen, revise, and correct their thoughts. What I hope to develop and see in students is an ability to make discoveries—to gain new insights through these discussions.”