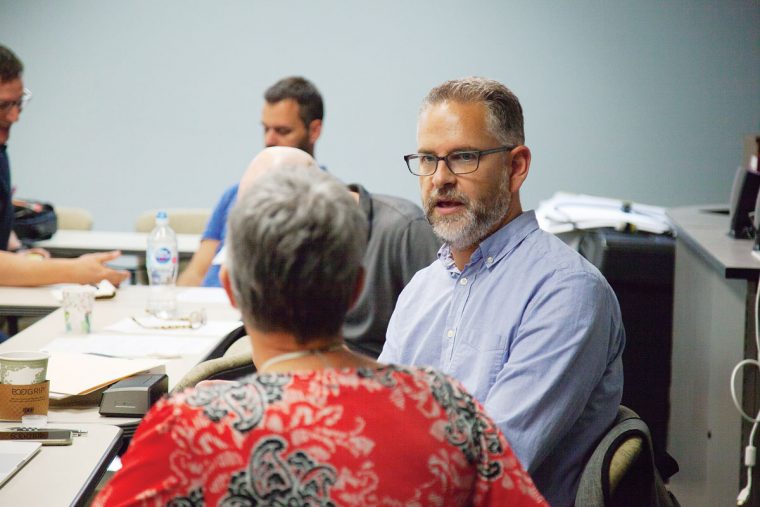 The 2018 recipient of the Distinguished Alumni Award Dr. Chuck DeGroat (’92) began his college career studying aeronautics at Dowling College on Long Island. But, after a year and a half, he realized that his vision and his mathematical abilities would prevent him from becoming a pilot.

“My pastor at the time was a graduate of Dordt,” says DeGroat, “and he said, ‘I think if you go out and visit Dordt, you’ll fall in love with the place.’” DeGroat’s pastor was right, and DeGroat transferred into Dordt’s philosophy program in the spring of his sophomore year.

“Being a philosophy major and studying with Professor John VanderStelt was an incredibly formative season in my life; it changed the way I thought about the world. It stretched me theologically,” says DeGroat. “When I went to seminary in the 1990s, I found the work incredibly easy. I was taught to think at Dordt College. I was challenged to write substantial academic papers, to make good arguments, to read writers who were hard to read. The education I received was spectacular.”

After graduating from Dordt, DeGroat earned both an M.Div. and an M.A. in counseling from Reformed Theological Seminary in Oviedo, Florida. He served at Willow Creek Church in Orlando for six years and began a counseling center at the church. He also did some adjunct teaching at Reformed Theological Seminary and eventually became director of spiritual formation. In 2008 he moved to City Church in San Francisco, where he also started a counseling center, and co-founded Newbigin House of Studies, a seminary with a nine-month lay-training program. Now, DeGroat is a professor of pastoral care and Christian spirituality at Western Theological Seminary in Holland, Michigan.

Reflecting on his career of teaching and writing, DeGroat notes that the books he read and the thinkers he met while at Dordt reappeared in the programs he developed later in his career. In fact, DeGroat says that he wouldn’t have even known about theologian Lesslie Newbigin—the namesake of the Newbigin House of Studies— had he not studied with Dr. Michael Goheen at Dordt.

“Dordt laid the philosophical foundation for me to think of people as whole,” says DeGroat. “I came to Dordt with a very dualistic theology, but I left with a vision of humanity and the world that was deeply holographic and redemptive. In sum, I discovered a God who isn’t merely interested in plucking souls from evil bodies for some heavenly worship service, but a God who sent his beloved son into a world he deeply loves to unleash its flourishing.”

DeGroat has written several books in which he invites people to flourish and enjoy “worthiness in Christ,” including Wholeheartedness and The Toughest People to Love. The book he is working on currently, When Narcissism Comes to Church, stems from his experience working with pastors who have narcissistic tendencies.

“These are pastors with a bent toward grandiosity, a sense of entitlement—not humility,” explains DeGroat. “One of the features is a very low empathy for other people. That seems counterintuitive in people who are pastors. What happens is that they have a spiritual persona that they wear, but they do it mostly for their own ego. We’d actually say that the ministry attracts people with narcissistic personality disorders.”

Unsurprisingly, having a narcissistic pastor deeply impacts a church’s culture.

“The current #MeToo and #ChurchToo movement, alongside stories of renowned pastors being caught in narcissistic and abusive patterns and, of course, the horrific scandal among Catholic clergy, combine to create a fertile moment for the church to confront narcissism—narcissistic leaders and systems,” says DeGroat. “In many respects, we’re asking narcissistic leaders to take a hard look within, something they are not prone to do. My hope is that the book is a wake-up call, that it puts words and stories about what people often intuit but can’t really name, and that it casts a vision for honesty and transformation, for individuals and systems.”

This commitment to the “soul of the church” has caught the attention—and the hearts—of a wide audience, including a Dordt alumnus who nominated DeGroat for the Distinguished Alumni Award.

“The Distinguished Alumni Award is given to those who have distinguished themselves in some fashion, who give evidence of living out of a reformational worldview, and who are able to make a valuable contribution to the Dordt academic community,” explains Alicia Bowar, associate director of alumni and parent relations. “Chuck was chosen for the Distinguished Alumni Award because of the way he is equipping others through his pastoral care and because of the transformative influence he is having in lives of others as he grapples with finding our wholeness and center in Christ.”

“The award has prompted in me some self-reflection on the good teaching and experiences, but also on my own immaturity and need for significant growth and maturation over the last 25 years,” says DeGroat. “I hope that people I know who’ve never heard of Dordt find themselves intrigued, and that this creates a pathway for continued friendship and partnership for the kingdom.”