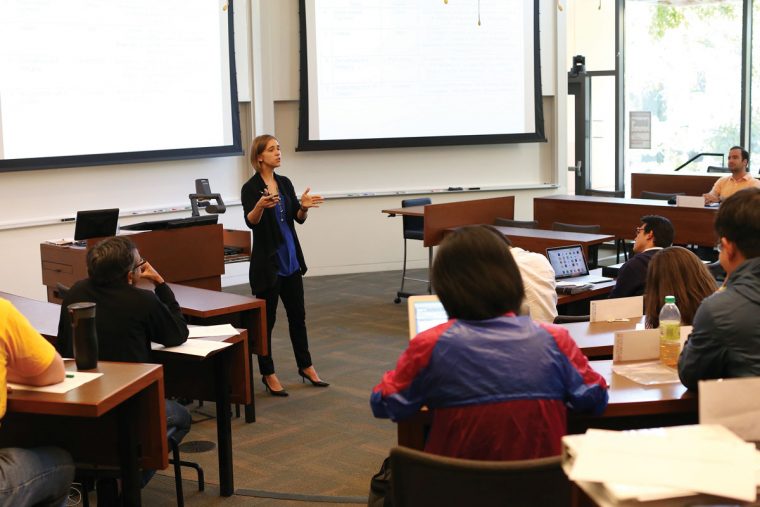 “Receiving the Horizon Award this year was unexpected,” says Dr. Elizabeth (Vander Ziel) Blankespoor. “I am grateful that Dordt encourages graduates to go out and influence the world and honored that they appreciate my actions. When I look at my fellow grads from Dordt, though, I see that they’re all doing great things and living out God’s will in their communities. So receiving this is a challenge to continue striving and looking for opportunities to bring positive change.”

Raised in a missionary family, Blankespoor spent her childhood living in Puerto Rico and the Dominican Republic.

“I remember thinking it was normal for the lights to randomly go out and to play charades by firelight,” recalls Blankespoor. “I didn’t realize that was unique until I came back to the Midwest.”

She also lived in Ohio, Idaho, and South Dakota before enrolling at Dordt.

“I’ve been able to learn about different cultures and people and to have unique experiences, and that has opened my eyes,” she says. “It’s helped me realize that you can adapt to a lot of different places.”

When considering where to go to college, Blankespoor applied to a few Christian colleges but decided on Dordt once she visited campus.

“It felt like home; I liked the people and campus,” she says. “In retrospect, I laugh a little to think that an 18-year-old chose my life. I had no idea at the time how much I would appreciate Dordt. Dordt’s intentional focus on teaching a Reformational worldview is so valuable. Every day there was living and interacting with a small community of people in a meaningful way, and challenging each other to keep Christ at the core. We were taught to think deeply about what it means to be a Christian and how that affects our daily lives.”

Blankespoor first became interested in accounting in seventh grade after winning a math competition. At that point, she knew she wanted to become an accountant, but it wasn’t until she enrolled at Dordt that she became passionate about the subject.

“I love the logic and the structure of accounting. It’s about thinking through transactions and how to represent the underlying economics. At its core, though, it’s about communication—the whole point of accounting is to understand and communicate what is going on in a business,” says Blankespoor.

Blankespoor realizes that many people perceive accounting as uninteresting.

“It’s an area that people are quick to dismiss—they see it as bookkeeping and as unimportant—but it underpins much of how we think about things, how we allocate money in the stock market,” she says. “It’s often called the language of business. When I talk with students, even if they’re not accounting students, I tell them that they need to know accounting because it’s how they’re going to understand business and communicate with people. It’s relevant and important in so many settings.”

After double-majoring in accounting and computer science at Dordt, Blankespoor served as an accounting analyst for JCPenney and worked as an auditor at Ernst & Young.

“After Dordt, I thought about grad school and even started a few applications, but I held off. I wanted to work first to make sure I enjoyed it and had a sense for how accounting really played out. After doing that for a few years, I realized that I wanted more space to ask questions and explore.”

“I chose to focus on archival data for my Ph.D. research because I was excited about the programming and data analysis that comes with it. I was also drawn to the topic of disclosure research—how firms communicate with their investors and what they choose to share in their financial statements. This comes back to communication—what should be communicated when.”

After finishing her Ph.D. program, Blankespoor landed a job at Stanford University where she did a combination of research, teaching, and service.

“It was a fun combination in that I could ask questions, use data analysis to try to answer those questions, and then communicate that evidence back to other researchers, the media, policymakers, and my students as I worked to show them the importance of accounting.”

She particularly enjoyed opening her students’ eyes to the breadth of accounting.

“We talked about how accounting standards change all the time and that they’re set by people, which means that sometimes they work and sometimes they don’t,” she says. “Understanding that nuance brings the topic alive. I also appreciated learning from the students and understanding their experiences. Working at Stanford was a great opportunity for me to learn more about the world of academia and business.”

This summer, after six years at Stanford, Blankespoor, her husband Adam (’00), and their two children moved to Seattle.

Her current research continues to focus on how companies communicate their financial information to their investors, what costs investors face when gathering and understanding that information, and how technology can change the way information is conveyed and used.

Looking back on her Dordt experience, Blankespoor appreciates how Dordt faculty taught her to think holistically about living her faith.

“It’s easy to say, ‘As a business major, the way to serve Christ is to donate money,’ but it’s so much bigger and richer than that. I appreciated Dordt’s worldview and its challenge for us; many conversations at Dordt centered around the call to bring shalom in all things. In business, that could mean solving meaningful problems with a product or service, creating opportunities for people to work and unfold their calling, and making sure resources are being used well. To do that, you need to know what’s happening with those resources, to monitor the business’ performance. Accounting plays a central role in making sure that we are allocating resources wisely, whether in a for-profit or non-profit organization.”