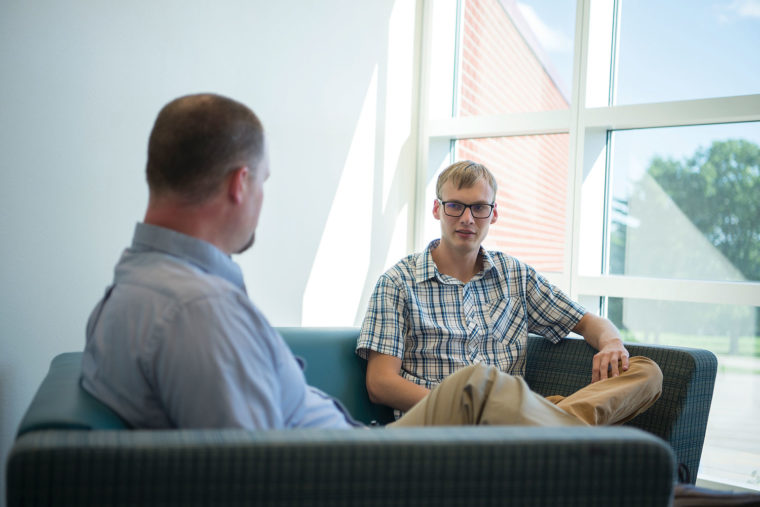 Machine learning, big data, artificial intelligence—today, it seems as if technology is advancing and changing at warp speed. What do such developments mean for responsibly creating and using technology? What does it even mean to create and use technology responsibly?

Everyone uses technology, and people in many professions have a hand in creating the many new technologies that keep springing up. However, it is computer programmers and engineers that are usually on the front lines of major developments. Whether building better software for the latest version of the iPhone or designing earthquake-proof schools, engineers and programmers are shaping our culture and our future.

“When you create a tool and let it loose into the world, it’s going to have consequences,” says Dr. Nick Breems, computer science professor. “That’s why we make tools—we wish to shape the future in some way.”

Breems co-teaches Technology and Society with Dr. Kevin Timmer, an engineering professor. The class challenges senior engineering and computer science majors to wrestle with what technology is and what a biblical perspective on technology might include. Breems, Timmer, and their students talk about the theories and philosophies behind technological developments, including how engineering and programming are—at their core—about relationship design.

“Think about the iPhone,” says Timmer. “Its design shapes our interactions with other people and with creation, because phones are used every day. Design isn’t only about making a product physically safe—it’s about contributing to healthy, flourishing relationships of every kind.”

With the power to create technology comes great responsibility. Kari Sandouka, a computer science professor, tries to help her students grasp some sense of that responsibility by teaching them about the Association for Computing Machinery’s code of ethics and professional conduct. She challenges her students to adhere to the code of ethics as they create code and build software.

One part of the code states, “Ensure that the public good is the central concern during all professional computing work.” Sandouka says that’s important, but it can be difficult for computer science students to understand the impact of what they’re creating.

“When it comes to the ‘public good,’ you have to think not only about what the software you’re creating is meant to do, but also about how people are going to use it,” says Sandouka. “That’s the point of having customers involved with the process; if you’re designing software, you need to get feedback and involve others with testing. You can’t just think you know everything, because you’re probably going to use the software differently than someone else.”

Sandouka cites the Hawaii false missile alert that went awry in January 2018 as an example of why testing matters.

“My students and I looked at pictures of the missile alert interface, talked about the poor design, and considered what could have been done,” says Sandouka. “Was it the programmers’ fault or the users’ fault? Unfortunately, there are a lot of examples like that out there.”

Sandouka admits that it’s not always easy to know how a client will use a product.

“Most of the programmers did not even know what the final outcome should look like,” Sandouka says. That made it nearly impossible for them to think about “the public good.” So she asks her students to think about helpful questions they might ask as they want to write programs that promote good rather than harm.

To Sandouka, wrestling with complicated issues such as these is an important part of a programmer’s education.

“I put the questions out there, but I can’t always answer them for my students,” says Sandouka. “Students need to think about where the technology they create is going to go.”

Sandouka and Breems hope that this sense of responsibility continues after students graduate. This past summer, Breems and recent Dordt graduate Josh Heynen (’18) decided to study whether Dordt alumni who work as programmers feel responsibility for what they are creating.

“For this research project, we don’t care as much if people follow the rules established by their employer or industry, as whether or not they have their own rules,” says Heynen, who majored in psychology and minored in computer science. “We want to know if programmers feel personally responsible, if they put the responsibility for their work on their employer, or if they do not care.”

Based on what Heynen uncovered in his literature review, he and Breems created a survey they plan to send to Dordt alumni who work as computer programmers. Heynen’s work on the project concluded in July when he began work as a technical coordinator at Premier Communications in Sioux Center, but the research will continue into next summer.

“As Christians, we’re called to be stewards and take care of the earth,” says Heynen.

“But if you’re a low-end programmer and only a little piece of a giant puzzle that creates something for your organization, there’s a great distance between you and the end product. There’s also a huge diffusion of responsibility. If something goes wrong and everyone believes that it’s someone else’s fault, that’s bad.”

Breems hopes that programmers take a macro view of their work.

“We need to look further than the next debug cycle and say, ‘If this software actually works, what is it going to do to the world? Is that a better place to be?’” he asks.

How about for the average technology user—what level of responsibility should consumers feel when it comes to utilizing technology?

Facebook offers a good example of how the lines of responsibility of the consumer and of the creator can become blurred.

“In some recent commercials, Facebook has talked about trying to go back to being a platform where people can connect with friends,” says Sandouka. “Facebook creators probably didn’t foresee that their creation would be used for cyberbullying, personal data collection, and ad manipulation. Now they’re saying, ‘We’re reducing ads and the algorithms that target people for particular reasons.’ But bad things are still happening on Facebook and other social media platforms. Is that the company’s responsibility, or is it the responsibility of the people who use it?”

Dr. Ethan Brue, an engineering professor, sees a connection between producing and consuming.

“In the world of technology, production and consumption are integrated,” says Brue. “Products are designed for consumers, and they dictate how a person consumes them in many ways. But consumers need to understand how their desires shape products and their production.”

When thinking about how people use technology, Brue prefers the term “co-creator” to “consumer.”

“To ‘consume’ means to use or burn something up. So using the word ‘consumer’ tends to dictate the way we buy and use things—everything becomes consumable,” he says. “But we should see ourselves as responsibly stewarding a product, asking whether there are ways that we can take care of it, and not considering it as something to use and throw away.” He challenges his students to think about how many people a product can impact and engage during its lifetime.

Brue suggests that focusing on the word “responsible” can help us understand what it means to co-create technology responsibly.

“Sometimes the word ‘responsible’ can feel like a command or another rule to follow, but the root of ‘responsible’ is ‘response,’” says Brue. “It is relational—I’m responding to someone who’s said or given something. We’re not the first voice—we’re the second.”

“Another thing to remember is that the first word for creation always begins with God,” adds Brue. “He invites us to respond to brokenness but also to delight in the joy of creating.”

It is a fine line, says Heynen, between creating something and letting it master you.

“I think it’s important as a user to not let the technology control you,” he says. “Ask, ‘How can I use this and not let it use me?’ Have a good reason for why you’re using it.”

Breems also encourages technology users to keep in mind that “nothing is really free.”

“If you’re not paying for a product, you are the product,” says Breems. “When you’re on Facebook, they’re selling you to advertisers. I think we would be creating a better world if we were willing to pay for services and not have ads do so.” He admits that it’s hard to give up something that is seen as free, though.

And, Breems and Sandouka say, programmers and engineers should keep in mind that what they create doesn’t end with them.

“Fifty percent or more of the code a programmer writes is given to someone else,” says Sandouka. “You don’t own it for your lifetime. I teach my students that it’s not just about getting your product out there and making sure it’s okay for the public to use. You need to pay attention to how it’s further developed, because it will have a life beyond you.”

“Responsibility for programmers and engineers is more than just providing quality products and avoiding ethical lapses,” says Breems. “It involves choosing one possible shape of the future over another. We want students to take ownership of the future they’re creating—they need the technical skills to accomplish the task at hand, and they need to have a biblically-based understanding of the larger world which will be shaped by the consequences of their handiwork.”