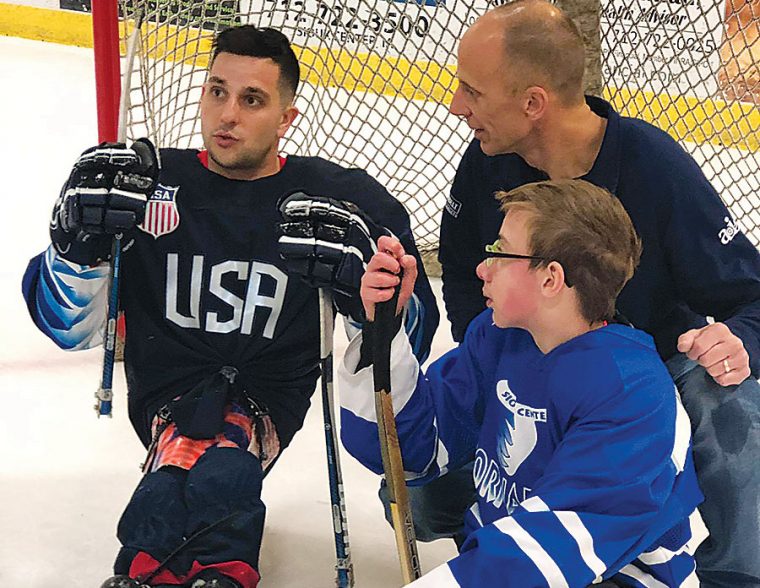 Each September, the Dordt Blades hockey team holds a youth hockey camp as a fundraiser for the team. In years past, the money earned has been used for anything from operational expenses to new equipment.

This year, Hockey Coach Nate van Niejenhuis was pondering what to do with the proceeds from the camp, when he heard that Siouxland Adaptive Sports (SAS) was raising funds for a sled hockey team.

Now a popular winter Paralympic sport, sled hockey has allowed participants with a physical disability to play ice hockey since the 1960s. Players sit on a metal frame atop two skate blades and use double-sided sticks to both propel the sleds forward and hit the puck.

“My 12-year-old son was at the rink,” van Niejenhuis recalls. “He’s skated since he was three or four, but he’s never played with his friend Eli Horstman, because Eli can’t skate. They’ve been in church nursery together since they were little. My son got to play hockey with Eli that weekend. You always want your kids to be inclusive of others, and to see my son do that with someone who wouldn’t have had that opportunity before was kind of a big deal.”

Van Niejenhuis told his team what he wanted to do with the fundraising money. “They were a bit startled at first,” he recalls with a laugh. “But there was a really positive response.”

On December 12, the Blades brought Kevin McGee, a two-time gold medalist para-Olympian, to play sled hockey with the kids at Siouxland Adaptive Sports. It was a night to remember for everyone.

“The sled hockey experience was one of the best of my entire hockey career,” says Blades Player Pieter Gesink. “Having the opportunity to give back to the game was something truly special. Hopefully this partnership with the Blades will continue for years to come.”

“Hockey is so much fun,” says Eli Horstman, one of the children who benefited from the hockey sleds. “I like being out on the ice, and I like that other kids can try out the sleds and get some games going.”

“Every year families have given to us in a meaningful way by showing up to our games, and now we have the opportunity to give back,” says van Niejenhuis. “That’s hockey, that’s community, and that’s kingdom citizenship. That’s what we’re doing at Dordt.”