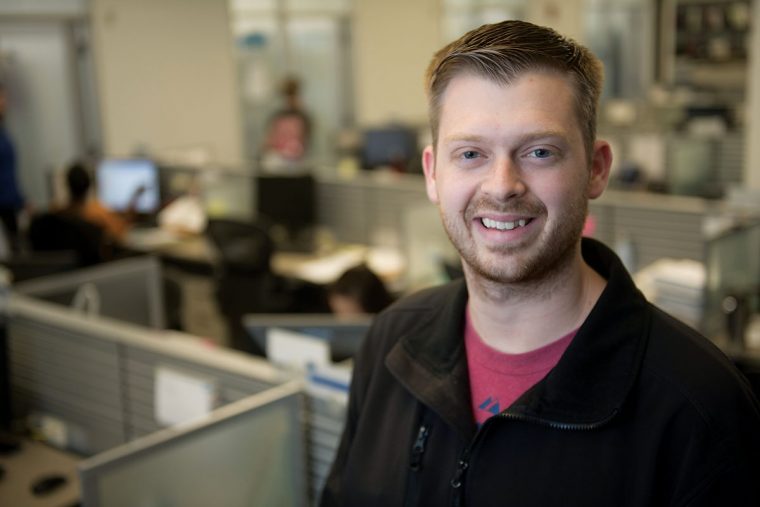 Adam Vander Stoep’s home community in Lyon County, Iowa, is different from New York City in most every regard, but Vander Stoep (’15) feels prepared for his new job as an assistant district attorney in the Bronx.

Like many born-and-bred residents of Northwest Iowa, Vander Stoep graduated from Western Christian High School in Hull, Iowa, in 2011 before enrolling at Dordt College. He chose to double major in criminal justice and political science to prepare himself for law school.

“I knew I wanted to become a lawyer already when I was in high school,” says Vander Stoep. His father, who has worked in law enforcement for decades and who currently serves as the Lyon County sheriff, played an influential role in this decision.

“As a young kid, I talked a lot with my dad about what he did at work; I went along on rides in his patrol car; I talked with his coworkers; and I saw the role that lawyers played in the criminal justice system,” he says. Those experiences instilled in him a strong interest in the law and a dream of becoming a criminal prosecutor.

“As a freshman in college, I reached out to Criminal Justice Professor Donald Roth because he was a lawyer,” says Vander Stoep. Roth met with him regularly to talk about law school and offered tutoring sessions as he prepared for law school entrance exams.

“Adam and I regularly worked through LSAT problems together,” says Roth. “Adam also applied himself as a founding member of the debate team at Dordt, developing oral advocacy skills to go along with the critical thinking skills that he was sharpening.”

Vander Stoep got his first taste of what working in law might be like when he interned for a year with a Lyon County attorney. He helped conduct research and began to understand the criminal justice process from a practical perspective. He also worked as a summer research student under Roth.

Vander Stoep also appreciated the supportive community he became a part of at Dordt. “My professors at Dordt pushed me academically, and the culture at Dordt was one where you were not on your own,” says Vander Stoep.

Following Dordt, Vander Stoep enrolled at the University of Iowa College of Law.

“I chose to study law at the University of Iowa because it was close to home and because it has a reputation for being well-respected in the legal field,” he says. “The law classes at Dordt were a very good primer for law school.”

The Bronx is a long way from Iowa, but marrying a law school classmate from the East Coast brought it closer.

“My wife Cecilia was offered a job at a big law firm in New York City, so I started looking for jobs out there too. Eventually I was offered a job as an assistant district attorney in the Bronx, where I started working in September of 2018,” Vander Stoep says. “I have learned so much about the procedural aspects of criminal law here in New York—more than I could have imagined when I first began a few months ago.”

Only 12 percent of New York City’s population resides in the Bronx, but 36 percent of the city’s violent crimes happen there. And even though crime rates are currently lower than they have been in previous years, the Bronx is no Lyon County.

“I felt prepared legally to work in New York, but the magnitude does take some getting used to,” says Vander Stoep. For example, when he interned at the Lyon County attorney’s office, there was one county attorney and three other staff members. In his current office, there are more than 500 assistant district attorneys, not counting support staff.

“I greatly appreciate the fact that there are so many different levels of experience and different perspectives amongst my co-workers,” says Vander Stoep. “There are people from the West Coast, and people from the East Coast, and they have different views on criminal justice and being a prosecutor than I do, as a Northwest Iowan.”

Though he isn’t certain where his job will take him in the future, Vander Stoep is pretty sure he wants to be a career criminal prosecutor.

“Becoming a lawyer takes a lot of school and a lot of studying—four years of college, three years of law school, studying for the law school admission test and the bar exam—but it is so rewarding. All of the time and effort does pay off.”

“The Bronx is one of the most challenging jurisdictions in the United States in terms of the load that the criminal justice system faces there,” says Roth. “Adam’s passion and drive in pursuing his legal aspirations are a critical part of what got him to the Bronx, and they will be vital in helping him thrive in this challenging calling.”