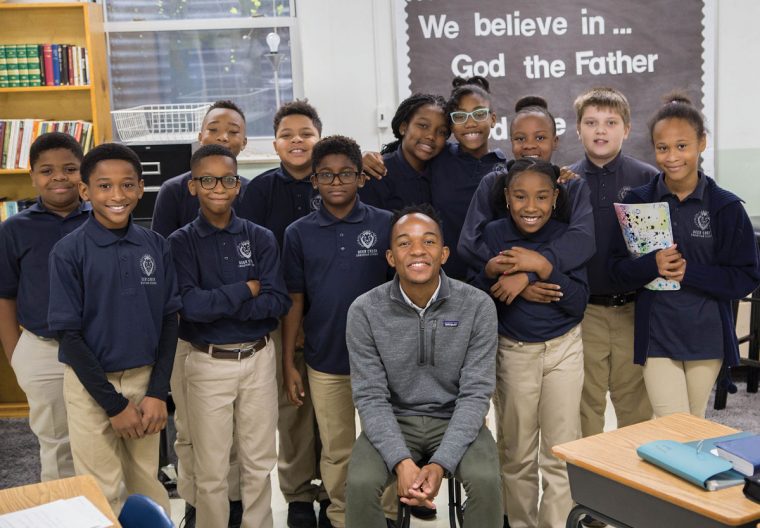 CACE, Dordt’s Center for the Advancement of Christian Education, began with a question: How can we make Christian schools better—how can they be places of real transformation?

In 2013, Dr. Timothy Van Soelen, an education professor, and nearly 45 other school leaders gathered in Provo, Utah, for two days to talk about that question. Six months later, when the group gathered again in Washington, D.C., Van Soelen proposed setting up a consulting group that would work alongside Christian schools who are committed to teaching from a biblical perspective. Van Soelen felt that Dordt, known for its excellent undergraduate education program and reputable master of education program, was well-equipped to take on such an effort. With help from the Sid and Carol Verdoorn Foundation, Van Soelen helped start CACE as a way to provide opportunities to Christian schools in need.

“I’m an education junkie, and there’s no better opportunity to walk alongside schools to help them become sustainable and flourish than with CACE,” says Van Soelen, who now serves as director of CACE.

CACE works through cohorts—groups of eight schools that collaborate with each other for two years. The cohorts focus on five areas: marketing and enrollment management, teaching and learning, board governance and team leadership, culture and climate, and strategic financial planning. To work with these cohorts, CACE employs fellows—education professionals who have expertise in at least one of the five areas of focus—to consult with the schools.

“We look at their website, their curriculum, their schedules, the leadership roles. We visit classrooms and talk with parents, administrators, board members,” says Dr. Barb Hoekstra, a CACE fellow and Dordt education professor. “It’s an interesting process; you know very little about the school at the start, and then after three days, you have a sense of their strengths and weaknesses, what’s going on with enrollment, what physical changes need to happen on their campus.”

The CACE fellows then present their findings to the school board.

“We are honest about what we see so that the board can determine how CACE might help the school,” says Hoekstra. CACE offers resources in areas such as hiring administrators and changing advertising tactics.

As members of a cohort, the leaders of the eight schools also gather at in-person conferences or through video conference calls to network, problem-solve, share ideas, and grow in their understanding of educational practices.

“The schools we work with have strong leaders, and we know that investing in them will ultimately be a good return on our investment,” says Van Soelen.

One of the schools in CACE’s initial cohort was Deer Creek Christian School in Chicago Heights, Illinois. Then-Interim Principal Steve Blom (’01) heard about CACE while visiting Sioux Center in 2014.

Blom says that, at the time, Deer Creek was isolated as a school.

“It had been a well-functioning school run by a church, but then the church left,” explains Blom. “There was significant turnover in leadership, and enrollment was declining. There were shifts in population as white families moved out of the area and black families moved in. It was all happening very rapidly.”

Blom called Van Soelen to talk with him about Deer Creek. Van Soelen invited Deer Creek to be part of the first cohort.

“The value of CACE was having a group of experts who were committed to Christian education who were willing to come in and learn with us,” says Blom. “They didn’t come in with a rubric of what needed to be done. They asked all the right questions that we needed to ask ourselves.”

For Blom and Deer Creek’s school board, one of those questions related to board structure. By working with CACE, Deer Creek rethought the role of the board.

“Because of the challenges we were facing, the board was heavily involved in daily activities such as approving when concerts or field trips took place,” says Blom. Typically, the school board’s primary role is to look to the future of the institution, and a principal or head of school focuses on the day-to-day activities.

CACE also helped Deer Creek conduct a board evaluation to come to an understanding of what a healthy board might look like.

“We reviewed our policies and governance structures so that the board could become more policy-driven,” says Blom. “Then we were able to hire the right people to lead the daily work of the school.”

Deer Creek hired Brian Verwolf (’11) as head of school, and the restructured board began to focus on long-term efforts. Over time, the school’s retention rate increased, and they became more financially stable. As head of school, Verwolf spent his time connecting with parents, students, and teachers; Blom transitioned to director of development, talking with donors, supporters, and friends about Deer Creek’s mission and vision.

“I will always speak highly of CACE and the approach they take to helping schools,” says Blom. “They want schools to think about what it means to do Christian education well. It was a remarkable experience for us at Deer Creek.”

After four years of collaborating with schools across the country, Van Soelen says CACE has moved into CACE 2.0, using the cohort model even more intentionally. CACE is currently conducting a legal audit with nine schools in California and partnering with a school lawyer to address hiring procedures, student and board handbooks, school policies, and more. The organization wants to equip schools for challenges that might lie ahead for faith-based institutions. They expect to offer the legal audit to other schools in the future.

Van Soelen says CACE is also increasing the time it spends on research and advocacy. They help schools apply research, alerting them to current data and new educational trends that can help them make informed decisions. And Van Soelen regularly attends conferences and presentations so that he can interact with school administrators and leaders. This summer, CACE is hosting a conference in Washington, D.C., where researchers, policy experts, and thought leaders will discuss what it means to be engaged in advocacy and policy for faith-based schools.

Another new focus for CACE has been Teaching for Transformation (TfT), a biblical framework for teaching and learning built on three core practices for the classroom. First, the school adopts a storyline to invite students into God’s story of creation, fall, redemption, and restoration. For example, at Sioux Center Christian School, first graders focus on the storyline of “seeing God in big and little things.” When studying insects, they pay attention to the parts of an insect—the “little things”—and then consider the purpose of insects, how sin has affected insects, and what restoration might look like—the “big things.”

Second, they identify biblical “throughlines” that weave through the Bible and the school’s curriculum.

“Throughlines identify who we want students to be—things like, ‘God worshipper, beauty creator, justice seeker, community builder,’” says Van Soelen. If schools truly want students to embody these characteristics, he says, students need to be able to practice them already in school.

The third core practice within TfT is called FLEx, a formative learning experience where students engage in something outside the classroom walls. “Our saying is, ‘real work with real people that meets a real need,’” says Van Soelen. “It’s doing something that contributes to an audience beyond their teacher or parent, an audience capable of critiquing their work.” For example, a student, having learned about gardening in science class, asks if she can start a garden at school. FLEx enables students to live what they learned in the classroom.

TAKING TFT TO THE CLASSROOM

Schools interested in adopting TfT spend three years working with CACE. During the first year, a school designer takes the school through training modules and also has teachers spend time with other TfT schools. During the second year, one third of the staff begin to incorporate TfT in their teaching, supported by visits from the school designer throughout the school year. Finally, in the third year, the early adopters each work with two or three teachers in their school to help them use the TfT framework.

“It’s a slow change because we want it to be a lasting change,” says Van Soelen.

Although CACE has only been working with TfT for a few years, schools are already seeing its benefits. Sioux Center Christian School’s Head of School Josh Bowar says Teaching for Transformation gave the school the framework and training they needed to take Christian education to the next level.

“Teaching is hard work and teaching from a Christian perspective is even harder work. It needs to come from who you are as a person, from deep reflection, from application of God’s word, from making connections with students,” says Bowar. “TfT has given our teachers tools to be able to do that well.”

Bowar says that, for many years, Christian schools like Sioux Center Christian have assumed that their teachers were teaching Christianly because they were Christians.

“Students saw varying levels of worldview integration from classroom to classroom. We were not as intentional as we could have been about what happens in each classroom,” says Bowar. “Among other things, TfT has provided a shared framework and vocabulary that allows us to better fulfill our mission and the promises we make to parents when they enroll children at our schools.”

If we believe that teaching from a Christian perspective is important, Bowar says, then school administrators, parents, and other supporters need to do everything possible to help our teachers do that effectively.

As an example of how TfT helps students to feel part of God’s story, Bowar describes how Sioux Center Christian first graders talked about “seeing God in big and little things” through social studies. They looked at the concept of relationships and how humans are created to interact with one another. The teacher examines this from a first-grade perspective. When disagreements happen on the playground or when someone is mean, how is this an example of the fall? How do we restore broken relationships?

CHRISTIAN EDUCATION FOR ALL

CACE’s commitment to “walk alongside Christian schools committed to teaching from a biblical perspective” has become even more timely today. As views on education have shifted and education costs have increased, some wonder about the value of a Christian education, given today’s cultural climate and changing perspectives.

Blom wondered these same things when he first moved to the southside of Chicago. Although he had attended Christian schools from elementary school through college, he says he felt ambivalent about Christian education when he looked at his new community.

“Only certain people could afford Christian education, or you had to go to the right church to be part of it,” says Blom. “We must commit to making Christian education available to everyone who desires it; I believe that’s the best reflection of the gospel, particularly in communities that are going through transition.”

When he and his wife chose to enroll their daughter in Deer Creek Christian School, he made a commitment to “Christian education for all” as a school board member, as interim principal, and later as director of development.

“I see Christian education as an opportunity to show that Christ is in all things,” says Blom. “Students are created in a unique way and their gifts and talents should be shared with one another, impacting the kingdom here and now.”

Blom is grateful for the ways CACE helped him and the Deer Creek Christian School educators recalibrate their board structure and refocus their efforts so that they can thrive and, in doing so, reach more people who want a Christian education.

“What fills me up every day are parents who experience Christ-centered education done well for the first time, and they turn around and say, ‘This is so good. We want to be part of this,’” says Blom. “It’s also a huge responsibility, and CACE has helped us to do it well.”