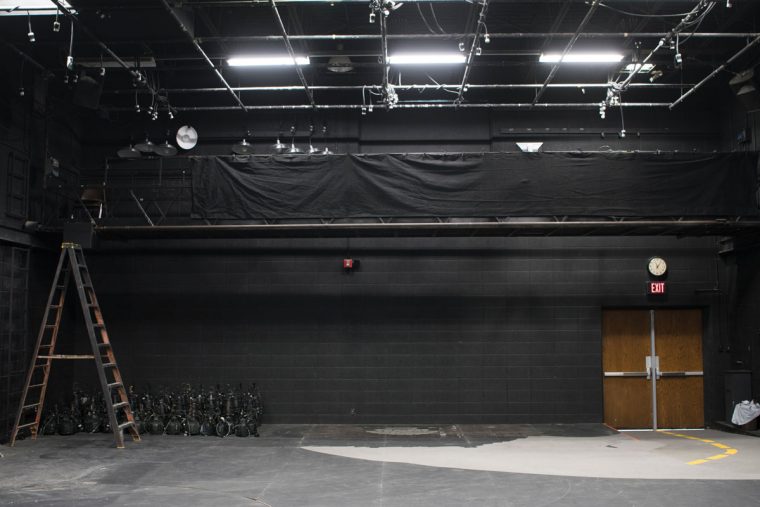 “How beauteous mankind is! O brave new world that has such people in’t!”

A large square room with black concrete block walls and no decorations or adornment held memories for hundreds of students and their theatre professors for the past 60 years. This year, it housed its last production; it will soon transition into a nursing department facility.

“The New World Theatre, often referred to as a ‘black box,’ gave students the opportunity to decide what type of playing space they would want,” says Dr. Verne Meyer, one of Dordt’s first theatre professors. “That’s why the walls and ceilings were black.”

“On its own it’s just a black box, but when you put a group of 15 people in the space, their creativity can turn it into a meadow with a running stream,” says Teresa Ter Haar, theatre professor at Dordt. “It’s like this clean palette.”

The first time senior theatre arts major Jalyn Vander Wal stepped into the New World Theatre she thought it was a boring black room. But as she attended shows and saw a variety of stage setups within the black box, she began to realize that you could do whatever you wanted with it.

Jeri (Brower, ’67) Schelhaas, an instructor emerita of theatre, says, “To create an imaginative world in a neutral space like a black box is a lovely challenge.”

THE NEW WORLD IS BORN

The New World Theatre began its life as a gymnasium and lecture hall. Plays were put on there as a co-curricular activity and were directed by Deborah Haan, wife of Dordt’s first president, B.J. Haan. In 1963, James Koldenhoven was hired to teach English and direct plays. Koldenhoven helped the theatre program flourish, bringing in visiting companies and generating patrons of theatre.

But Koldenhoven’s greatest contribution came in 1977. The college was adding academic departments, but theatre was still a co-curricular activity. He recalls going into President Haan’s office, holding his contract, and with a daring glint in his eyes, saying, “Look, I want theatre to be a major, or I’m leaving.”

Haan agreed but wanted to make sure the program would be consistent with the college’s vision.

“So, we met every week for three months,” Koldenhoven says. “It was all the brains at the college and me, a farm boy with a Ph.D. in theatre. We talked and talked. When I finally put together the results and presented a proposal to Haan, he made it happen.”

With the new program came the need for new space. The gymnasium was transformed. Meyer, who had experience with black box theatres, led the design process. A wall cut the space in half, creating a scene shop on one side and a black box on the other. A light grid on the ceiling and a bridge that rolled along it with the push of a button made New World Theatre complete.

Now it needed a name.

“I named that theatre,” Koldenhoven says with a smile. “It’s a quotation from Shakespeare’s The Tempest: ‘Oh brave new world!’ After 10 years in that small gymnasium, it was a brave new world to have our own theatre. But more importantly, with New World, we were able to do some experimental theatre and try out new scripts.”

“We wanted a place that was totally versatile, that would help us think of the dramatic space as an aesthetic world—hence, ‘new world,’” says Meyer. “You take a piece of literature and then design a playing space that supports and explores the ideas within that story. That decision could be made with every production that was staged in the New World.”

A SPACE FOR STUDENT WORK

Since it opened in 1977, the New World Theatre has been a hub for student work. While many Christian colleges have a mainstage theatre for faculty-directed shows, it’s rare to have a facility where undergraduates can propose and direct a full production.

“I’ve appreciated the opportunity to do design work,” says senior Aidan Bender. “I love that Dordt is just the right size to offer such hands-on experiences to students.”

“We say to our students, ‘Here’s the space, here’s the budget, here’s a support team of faculty who will listen to you and offer suggestions, but we won’t tell you what to do or how to do it,’” says Ter Haar. “Almost every student who has proposed a project has been able to do it.”

One of Technical Director Laura (Berkompas, ’06) Andersen’s favorite parts of teaching is facilitating student work in the New World.

“There’s something rewarding about seeing a student show go from a concept in a meeting to a fully-fledged production,” she says. “Seeing them have those ‘aha’ moments in the process, seeing their interest bloom and grow, and giving them a chance to do it is fantastic.”

“My favorite times were the student-directed plays,” recalls Meyer. “The theatre was designed to facilitate dialogue between audience and actors. Often after our plays we’d serve coffee, and people could sit and talk about the theatre and the design.”

“We sometimes would invite an audience so we could allow students to do edgier work, stuff that challenged them as artists,” says Schelhaas. “We were training professionals; we wanted them to learn how to draw lines for themselves, to ask, ‘How does this show help this community to deal with this issue?’”

During his senior year, for example, Ethan Koerner (’05) wrote and directed a puppet play called Death Song. The central theme was dealing with cancer. A fellow student who was part of the theatre program had recently died after a fight with cancer. The play, in some ways, was a means for the community to process that grief together.

A SPACE FOR PERSONAL GROWTH

But it wasn’t only academic work that happened in the New World; students grew personally.

“It’s not just about the plays or the stories you tell in that space,” says Ter Haar. “It’s about the relationships that are forged between casts and crews, between audience and story, between cast members and audience. That’s what makes live theatre so powerful. And in a space like the New World, it’s even more powerful because it’s intimate.”

“The New World was pretty much the central hub of theatre for us,” recalls Nathan Sparks (’14). “We did everything in there—auditions, rehearsals, meetings, set building and designing, student-directed one-acts, senior shows. A sense of family and community developed while being in theatre. Everyone was involved, from the newest freshman to the most experienced senior.”

When alumni share what they most appreciated about their theatre education at Dordt, they often mention the influence of their professors.

“Jim and Verne were wonderful professors who were transformational,” says Kathy (Powell, ’89) Fictorie. “I probably learned the most from Verne about what it means to be Reformed, to know that being a Christian encompasses every square inch. You don’t have to do Christian plays, you have to do plays Christianly, in a way that uses your talents to glorify God.”

“Acting with Jeri Schelhaas changed my life,” says Laurel (Alons, ’06) Koerner. “Jeri was so conscious of the atmosphere in the room and of sustaining an atmosphere that included everybody equally, encouraging bravery and thoughtful reflection, and nurturing us into freedom. I wasn’t just learning about acting, I was learning about myself. As a professor now, there are many days when I think to myself, ‘What would Jeri do?’”

MOVING FORWARD, REMEMBERING THE PAST

Today, in a field beyond the Science and Technology Center, a new theatre building is under construction. It, too, will include a black box like the New World Theatre, one that will be bigger and will include new technology. The lighting and soundboards will be reused, but there will be a fixed control booth, making backstage work easier. Eventually, the campus plan puts the theatre department adjacent to the music building, allowing for more collaboration between music and theatre.

For Laurel Koerner, who will start teaching in the theatre department in the fall, the change in space is both exciting and sad. “I don’t know what Dordt theatre is without the New World,” she says. “It’s exciting to have new things on the horizon for the program, and I think it will yield great things. But it’s sad to say goodbye.”

“When you are in the New World Theatre, you can feel how old the space is,” says Bender. “The electronics room used to be a locker room; there’s still a drain in the floor under the carpet and the floor slopes to one side. In the cabinets are items from 30 years ago. Notes from past generations describe how things run. It’s cool knowing that some college student from years ago, now likely a parent or grandparent, left me a note telling me how this light works.”

When asked what will be missed about the New World, Schelhaas’ voice shows emotion. “Space is memory. It’s life-changing moments. I think there’s no space on campus that has been designated for one thing longer than the New World Theatre has for theatre. There’s something about the spirit of a place—standing in this spot where people for 60 years have been doing theatre and thinking about who came before and what was said and acted here.”

She smiles. “I still remember my first line, when I walked out on that stage. ‘Oh Earnest! It’s only you. I thought there was someone here.’ And I remember my last line, from The Crucible. “‘He has his goodness now, God forbid I take it from him.’”

“I’m devoted to the mission of Dordt, and the theatre department has maintained that mission well,” Schelhaas adds. “Verne would grill the kids about a Reformed view of theatre, and a kingdom vision. When I would teach other classes, I found that the theatre students could articulate the vision of the college better than anybody.”

Fictorie hopes this vision will continue to hold strong as the theatre department moves into a new phase of existence.

“The vision that has always been at Dordt—about how we are called to transform the world that we live in, to bring about the in-breaking of the kingdom—I hope that vision never gets diluted. That is what Dordt is all about.”