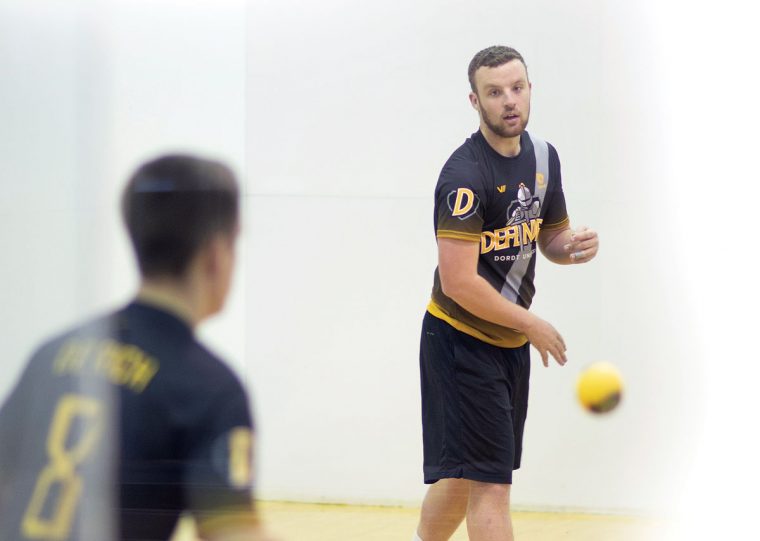 Nathan Detrich (’21) and Trevor deJong (’19) have brought their love for Spikeball to Dordt.

The pair hail from Escondido, California, where Detrich’s family introduced them to the backyard lawn game. The two men have become increasingly serious about their game over the past couple of years. They played their first tournament in Santa Monica.

“It was a pretty big tournament, especially for two years ago,” says Detrich.

“I was playing with his older brother, and we got to the second or third round of the knockout tournament. We played the team who was, at the time, the best team in the country,” says deJong, a senior accounting major.

“That was definitely a wake-up call,” adds Detrich. “We realized that super competitive Spikeball can be a lot of fun, so we got way more into it.”

DeJong and Detrich began competing together, learning better serving strategies together, and attending more tournaments together. They even chose to attend the same college.

“I was interested in the Pro-Tech program, so I came to Dordt,” Detrich says. “It was a good fit for what I had in mind. I really like it here, so I’m actually staying for a business degree after Pro-Tech.”

In addition to their studies, Detrich and deJong have become involved in the collegiate Spikeball scene.  Detrich started a Spikeball club on campus and more than 50 students attended the first club meeting on Southview’s lawn.

Spikeball is best played on sand, grass, or turf, but despite the terrain challenges of Dordt’s campus, Detrich and deJong pushed themselves to compete at the college level. They signed up for the Great Lakes Region Sectionals where they won the tournament against teams like Marquette University and Iowa State University, earning the right to have their own jerseys created.

“Many teams already had their own jerseys,” says deJong. “It’s a cool symbol that says, ‘I take it pretty seriously.’”

After graduation, Detrich hopes to continue to play at a professional level. Most professional players have full-time jobs and compete on weekends.

“It’s a hard-core hobby taken to the professional level,” says Detrich. “I definitely would like to get there someday.”

Spikeball gained attention in 2008 when it appeared on the TV show Shark Tank. The sport is best described as a cross between volleyball and foursquare. Spikeball is played two-on-two. Partners stand next to each other around the circular net, one person serves the ball onto the net, and the other team has three passes between them to get the ball back onto the net. Once the ball is served, it can be played anywhere around the net with no boundaries—just don’t let it touch the ground!