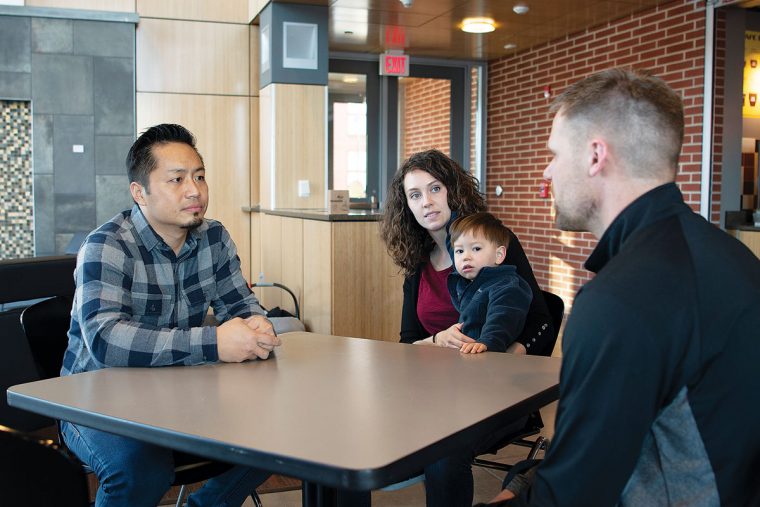 Looking for the best cup of coffee on Dordt’s campus? Stop by 55th Avenue Café in Kuyper Apartments, where you can purchase a pour-over or a pound of Laotian coffee beans, roasted and sourced by Dordt alumna-owned Pilgrim’s Coffee.

“We have a little bit of everything,” says Danny—a bed and breakfast for travelers, a café where local young people hang out and sing karaoke at night. They also own a roaster, where in 2018 they roasted three tons of coffee beans.

The Longkumers’s interest in roasting coffee began after they married in 2014.

“We love traveling, and purchasing coffee takes us to different parts of Laos,” says Danny. “We also found that our kitchen went through a lot of coffee, and we wanted to make sure we were serving fresh-roasted coffee beans.”

Fortunately for the Longkumers, Laos is known for its great coffee. The country was once one of the largest opium-producing countries in the world, but as opium has been eradicated, Laotian farmers have started growing coffee. Danny says that, although Laos does not produce as much coffee as neighboring Vietnam or India, the coffee beans they grow taste great. He often has to travel 200 miles away, driving for six hours on rough roads to reach coffee farmers.

Some farmers Christa and Danny work with have never tasted their own coffee.

“One of our first growers got to taste his own coffee for the first time after we roasted it and brought a cup back for him,” says Danny.

Some farmers switched from growing opium to growing coffee beans without any training.

“Many didn’t know how to grow coffee properly,” says Danny. “So they would just let the coffee plants grow until the plants died.”

Over the years, the farmers have learned the proper way to harvest beans, stripping the beans from the tree and then sorting them. This has resulted in a higher yield in beans and more profit for the farmers.

“My social work professors taught me how to care for people, to love and help them spiritually,” says Christa. She carried that passion for helping others to Laos and into the work that she and Danny do at Pilgrim’s Kitchen and Inn.

Christa and Danny sell most of the three tons of coffee they roast in Laos, but about 100 pounds ends up at Dordt every year. Art Attema, a professor emeritus of business, started this connection; he had heard about the Longkumers and Pilgrim’s Coffee in Laos, so he contacted them and mentioned that Dordt had two coffee shops on campus that might be interested in selling Pilgrim’s Coffee.

That was three years ago. Since coming to campus, Pilgrim’s Coffee has been a hit with coffee lovers.

“We have gotten good feedback about our pour-over coffee options—many students appreciate the more flavorful brew they get from freshly ground beans,” says Bethany Van Eps, co-president of the Dordt Business Club, which runs the 55th Avenue Café.

“We are proud to be connected with Dordt,” says Danny. “Through Pilgrim’s Coffee, we are able to employ eight people and give them economic stability. We help farmers grow better coffee. And Dordt’s partnership helps us to make a big impact in people’s lives.”