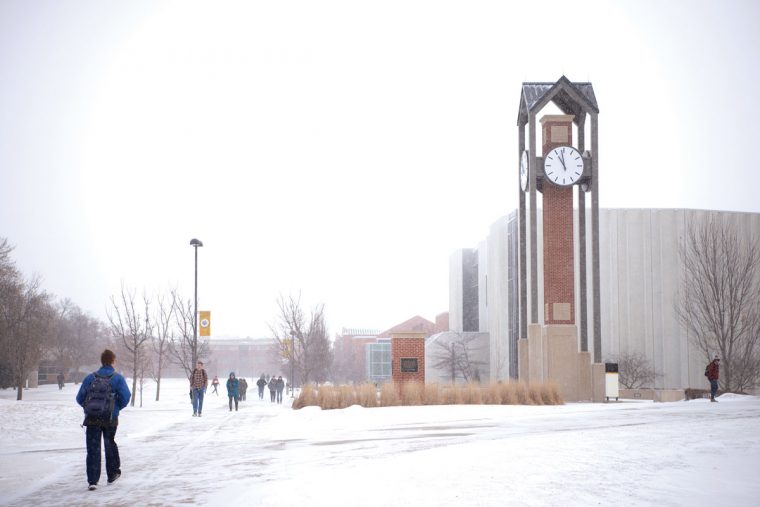 On January 29, Registrar Jim Bos (’85) was sitting in his office on the third floor of the Campus Center when he saw an email from Chief Administrative Officer Howard Wilson hit his inbox.

“Within seconds, I heard students cheering in the Defender Grille,” says Bos. “I didn’t need to read the email to know what the cheering was about.”

Wilson’s email to campus stated that, based on the forecast of severe winter weather with a risk of frostbite, Dordt would be closed all day on Wednesday, January 30. Wind chills were supposed to drop as low as -40 degree Fahrenheit.

“Record cold was predicted, when you take into account the air temperature and wind chill,” says Bos. “When Fahrenheit and Celsius equal each other, you know it’s cold.”

To say that closing Dordt’s campus on January 30 was unusual would be an understatement. Over the years there have been a few late starts and early outs, but not a hard close. January 30 was the first time since the Rec Center opened in 1997 that its doors were locked during regular hours. January 30 was also the first time in many years that faculty and staff were essentially told to stay home on what should have been a normal day at the office. The last recorded closure Dordt’s archivist could find was in 1983, when classes were canceled the Monday after Thanksgiving break because a blizzard kept students from returning on time.

In fact, Dordt has a reputation among alumni, students, and the community for never closing. Until January 30.

In his six years at Dordt, Wilson has become known for his weather advisory emails, which he typically sends out 24 hours before a storm is expected to hit. “Students have told me, ‘Mr. Wilson, I don’t bother to read your emails. I know you’re just going to tell me we’re having school anyway,’” quips Wilson.

But Wilson’s emails are helpful alerts signaling that the administrative cabinet is seriously considering pending weather conditions. The day before a predicted storm, cabinet members, maintenance staff, and the registrar’s staff look at the weather forecasts and consider what the public safety agencies are recommending. Then they make the final call.

“Our primary concern is for student and faculty safety,” says Wilson.

One reason Dordt rarely closes is because Dordt is a highly residential campus. “Most of our students are within walking distance of the classrooms,” says Wilson. “The challenge for us is getting faculty and staff to work.”

In the past, most faculty and staff lived within walking distance of campus; now, more live in Rock Valley, Sanborn, and beyond, which can make winter travel more dangerous.

Current and past students went to great lengths to try to get class canceled. In an attempt to cancel classes on January 30, Northwestern College and Dordt students banded together to start Change.org petitions for their respective institutions.

“We helped you, now you should help us,” said one Dordt student on the Northwestern petition. Wilson says that the petition did not have an impact on the final decision to close, particularly since a number of the signatories were not Dordt students.

Efforts to get class cancelled have happened before.

“Back in 1974 or 1975 when I was working the evening shift at KDCR, someone claiming to be Dean Ribbens called in and asked me to announce over the air that Dordt’s classes would be cancelled the next day,” says Stan Pilon (’75). “I fell for it until the real Dean Ribbens called and told me I’d been pranked. I’ve never figured out who did it, but I’d like to.”

Another prank lives on in campus lore: Did a student actually impersonate President B.J. Haan to call a local radio station to cancel class?

“My recollection is pretty clear that it actually happened,” says Al Kosters (’65).

One snowy Sunday evening in 1962, a group of guys were hanging out in a basement apartment at a professor’s house. Someone mentioned that it would be nice if class would be canceled the next day because of the weather.

Someone decided to call the local radio station. Kosters can’t remember who, exactly.

“What I do remember is class was canceled, the storm blew over, and it turned out to be a pretty nice day,” recalls Kosters.

Other alumni remember times when they had to persevere despite bad weather. Gregg Zonnefeld (’92) remembers how, on the last day of exams in December 1989, it was so cold that almost no cars started.

“Maintenance spent their day dragging cars to the maintenance building to jump them so all of us could get home,” says Zonnefeld.

Jason Van Zee (’05) remembers seeing a -55 degree Fahrenheit wind chill during his senior year. “And, on a different occasion, we had terrible ice, and maintenance set up a rope handrail from East Hall to the classroom building,” he says.

When classes were canceled on January 30, students found creative ways to spend their time.

“In the evening, a group of friends organized a potluck in Kuyper Loft,” says Jonathan Fictorie, a senior. “We enjoyed fellowship over homemade soup, macaroni and cheese, and tacos. Then we played games into the night.”

Junior Emily Wicker says she worked on homework and went to a Bible study. Erika Buiter, a junior who commutes to Dordt from Ireton, says she put laundry away and read for her English classes. Junior Kaysha Steiger tried to get ahead on homework, relaxed, and just hung out with friends.

“I stopped by Dordt that afternoon, and I counted seven students—one in basketball shorts—who were studying in the Campus Center,” says Wilson. “We do believe there were some Buffalo Wild Wings trips that were scheduled, too.”

Despite what happened on January 30, Wilson and Bos say that students shouldn’t expect canceling classes to become a common practice.

“Closing campus is complex, and we don’t make that decision lightly,” says Bos. “I wouldn’t expect a replay. But when it’s so cold that being outside for a matter of minutes runs the risk of frostbite, we need to be careful.”