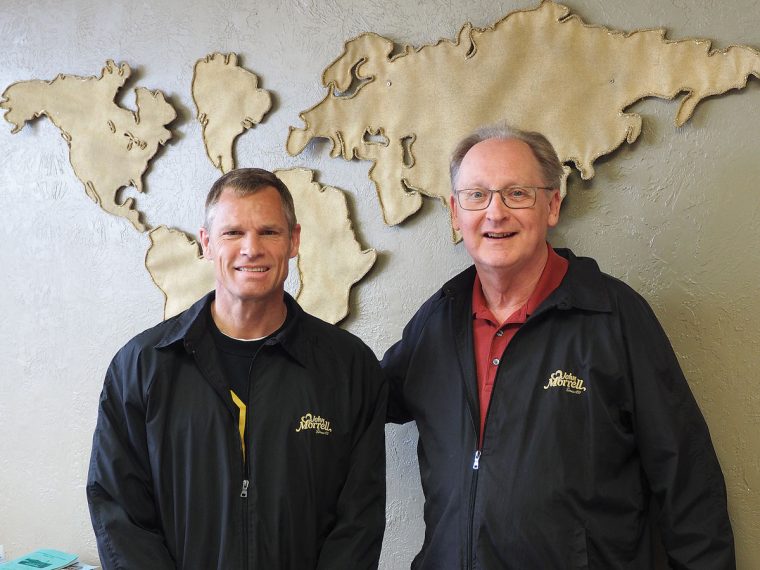 Once upon a time, the place was a school for hairstylists, strangely enough. Dozens—well, hundreds—of students, most of them young women, came in to learn to cut and trim and set, then graduated and went back out to make the world a prettier place.

When Stewart School of Hairstyling moved away from its downtown Sioux Falls, South Dakota, location, they left behind a fine, brick building, 30,000 square feet, in a central location in the heart of the city.

Right about then, Pastor Fred Wilgenburg (’91) was busy running the Center of Hope, an urban ministry designed “to walk alongside people, to bring spiritual and physical health, and ultimately to change the community, one life at a time.” It was Wilgenburg’s vision—well, he’d say, a vision given to him—to bring a handful of similar local ministries together in a central location downtown. Today, the school for hairstylists is a full-fledged ministry center.

And tonight, Wilgenburg has a class in an upper room. Who’s here? A couple of Liberians named Prince and James; Ambika, from Bhutan; Mathuos and Abidela, Ethiopians; Ganga, from Nepal; and Naamah, who grew up down the road in South Dakota.

Tonight’s fare is “Christian stewardship.” It might surprise you to know that the students are Christians. They’re working on a unit from Timothy Leadership Training, a 14-month, intensive course of study. Tonight, they’re reviewing “Eight Steps to Effective Giving,” then creating action plans for their own ministries among Sioux Falls’ immigrant and refugee communities.

The class is spirited and a joy, punctuated with giggles. But Wilgenburg has to watch the clock—and so do they. Several of them work several jobs, have families and responsibilities. All of them have been in this country for several years. It’s a dynamic, blessed ministry in the kind of place Wilgenburg wanted it to be—a big place, easy to find, in the heart of the city.

But if you dig for roots, you’ll go back to Orange City, Iowa, late 1950s, a small farm back then on the western edge of the village. Henry and Bertha Bruxvoort had just sent son Harold (’58) to that brand-new college in Sioux Center. He commuted; after all, there were cows to milk.

It didn’t take long before Harold took a kid along home to Sunday dinner, a freshman named Ernie Benally (’58), who happened to be Navajo, from New Mexico, a long way from home. It wasn’t just once either—Harold took Benally home regularly. After one Sunday dinner, Mrs. Bruxvoort told Benally that if he’d like to, he could live with them in Orange City and ride to college every morning with son Harold.

Benally became family, a family that included Carl, the Bruxvoort’s youngest son. Carl was just a boy, but he says having Benally around taught him something that affected him for life: In the world he knew, even as a kid, the idea that “all men are created equal” may well work politically, but he started to understand that not all of us are blessed with an equal chance at whatever dreams we create for ourselves. Carl says hearing Benally talk about his home on the reservation taught him about life and about us and about justice, taught him lessons he never, ever forgot.

Little Carl grew up and went to Dordt himself some years later to nurture that vision. He majored in philosophy and graduated in 1973, then attended the Institute for Christian Studies in Toronto for a year—Sunday walks in High Park among hundreds of Canadian ethnics were pure joy, he says. He went on to Calvin Seminary in Grand Rapids, Michigan, and eventually, as a pastor, interned in Japan, then served churches in Kansas and Michigan, small-town and city. He and his wife worked with a GEMS program in Muskegon that became, eventually, half African-American. Eventually he signed on at a Sioux Falls church as a pastor of discipleship, helping people to grow.

In Sioux Falls, Pastor Carl Bruxvoort’s inspiration for what would eventually become New Roots Ministry began with a renewed sense of the power of prayer, a commitment nurtured in ecumenical prayer with pastors from a variety of local churches and included local immigrant refugee pastors from around the world.

So, when he found himself looking for something new, some new ministry idea that would incorporate both his old-line social gospel leanings and his newfound commitment to a level of piety he’d earlier thought he’d left behind, he came up with something called New Roots Ministry.

Sioux Falls had recently become a haven for immigrant refugees from a hundred nations, most of the people uncomfortably situated in a city in the lily-white Upper Midwest. Sioux Falls was bursting at the seams. Jobs were readily available, many at John Morrell, a sprawling packing plant constantly looking for help. At one time, the local newspaper listed 142 languages being spoken everyday in the city: 22 European, 70 African, 34 Asian, and many more, tongues from Lingala to Lakota.

“The important question then for us as Christians is whether we see God’s hand in this global migration of peoples and how we see this migration as creating new opportunities for ministry.” Dozens of times Bruxvoort said things like that in dozens of places, reminding himself and his listeners of what he’d learned as a boy by way of his parents’ gracious hospitality.

All of that led him into strange places for a pastor, one of them right there into the belly of John Morrell, where he pulled on a hairnet beneath a hard hat and made himself available for workers of all colors and creeds. New Roots Ministry was dedicated to developing believers, helping them in every way possible, from managing budgets to stages of grief—most of it to the community’s most recent citizens. Not that long ago, he preached at the funeral of a four-year old son of one of his own co-workers at John Morrell.

When retirement age crept up, Bruxvoort began looking around for a successor and found Wilgenburg, whose Center of Hope did work that sometimes dovetailed with New Roots. The two of them talked regularly, shaping the new downtown ministry center in the old hairstylist school.

Wilgenburg came to Dordt College from Escondido, California, after one of his older sisters had come earlier (as did a younger brother later). At Dordt, he met Amy Bartels (’91) during his and her very first semester, and they were married after their junior year. Fred sold Land O’Lakes feed for four years in the Inwood, Iowa, area after graduation, and did a healthy load of youth work at their church. He loved it. Weekly prison visits were a joy to him too, but then, he says, he’d always had a strong interest in missions.

All of that went into a decision to enroll in seminary, even though he claims he was always more interested in outreach and inter-cultural ministries than pastoring a church. Three long years later—working at Citibank, going to Sioux Falls Seminary full-time, and being a husband and a father—he graduated with an M.Div. that he says has served him well, giving him the experience and understanding and the authority he’s used in the years he’s been involved in ministries in the city.

It shouldn’t be difficult to understand how it was that Pastor Carl Bruxvoort, who’d begun New Roots Ministry, found Pastor Fred Wilgenburg, of Center of Hope—both of them right there in Sioux Falls—to be exactly the kind of servant who could lead New Roots after Bruxvoort retired. Both of them had been committed to inner city, multi-cultural ministries. Bruxvoort was ready to retire; Wilgenburg was looking for a change—not a big one, but a change. And both of them, somewhere in their past, have a Dordt College diploma.

Today, it’s Wilgenburg who pulls on a hard hat and heads into John Morrell to visit, to be a ministry of presence among the workers, many of whom are still strangers in a strange land.

That’s why tonight in an upper room in an old hairstylists’ college, eight adult Christians, seven of them non-native speakers, people of color, are talking about effective ways to teach their individual fellowships the importance of being stewards of whatever God gives them, to develop within their people thankful and generous giving.

That’s just one of the missions that go on in the Sioux Falls Ministry Center some nights. If you’re in the area, drop by. They’re perfectly placed in a great, old building, right downtown.